Tribeca Review: My Heart Can’t Beat Unless You Tell It To is a Riveting Horror Family Drama 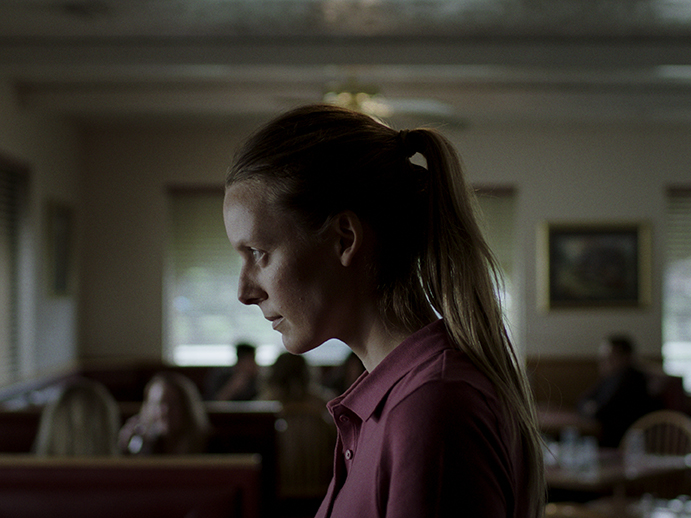 Landing somewhere between intense, realistic family drama and arthouse horror, Jonathan Cuartas’ My Heart Can’t Beat Unless You Tell it To is an oddly moving tale about social isolation, loneliness, and illness that resonates as a character study focused on the space of mourning. Dwight (Patrick Fugit) is a nightcrawler who spends his time hunting day laborers, the homeless, and other indigent persons living on the economic margins as a means of keeping his brother Thomas (Owen Campell) alive. Thomas, for all intents and purposes, is an undiagnosed vampire, warned by his waitress sister Jessie (Ingrid Sophie Schram) against leaving the house, especially during the day.

While Thomas’ origin story is never discussed––rather just accepted as a fact––Jessie and Dwight go to great lengths to create a happy household, bringing a karaoke machine into the equation and making sure Thomas’ basic needs are met while staying under the radar. Things, of course, don’t go as planned as Thomas (who is given the kind of mopey look you might associate with a burnout teenager standing in front of a convenience store) longs for human connection and is intrigued when he hears neighborhood kids playing outside. Thomas himself is a reluctant hunter, as the film will reveal.

Dwight also feels the same sense of isolation, driving into town to meet his basic needs, including a regular appointment with an escort at a local motel which serves as a hunting ground for both him and Jessie as they consider who is new and town and who won’t be missed.

Photographed in the tight academy ratio by Michael Cuartas, My Heart Can’t Beat Until You Tell It To is a deliberately paced thriller that makes the most of its limitations, creating a tense intimacy that elevates the material beyond its horror and thriller roots. Jonathan Cuartas’ script builds genuine empathy for an isolated family of reluctant hunters led by Jessie, the de facto head of household who leverages a toxic maternal influence over both Dwight and Thomas. She is willing to go to lengths that Dwight will not as they “process” their kills, draining the blood and getting ready to feed Thomas.

Although light on backstory, My Heart Can’t Beat Unless You Tell It To proves to be a riveting family drama covered in gallons of blood, effectively capturing Dwight in the myths of a metal breakdown pulled to the extreme by Jessie, who bags and tags the only women who really understand him. The film refuses to veer at any point into the kind of dark comedy catharsis one might expect to find in this scenario, instead rather approaching the material like a vampire thriller. Cuartas’ vision is one of a dark end of life drama, where life is essentially put on hold to care for a family member.

Each densely packed and claustrophobic frame feels like voyeurism as we witness intimate, private family movements sometimes at a distance and from around the corner. Although masterfully directed and performed, the film somehow feels a bit unresolved, especially since the family lives in a populated suburb rather than a rural area which would make their desperate actions far easier to conceal. I suppose the counter-argument here is we never quite know what is going on in the backyard of the house across the street nor do we know what their lived experience is within the four walls of their house.

My Heart Can’t Beat Unless You Tell It To screened at the Tribeca Film Festival and will be in theaters and on VOD on June 25th.