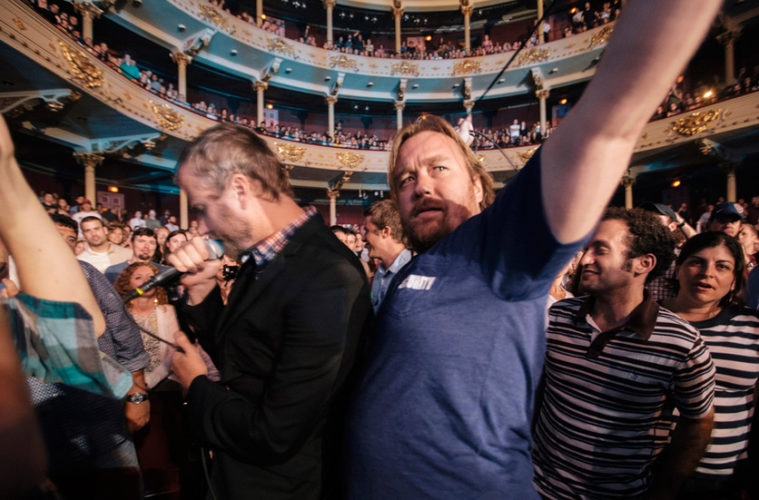 Emerging as one of indie rock’s most acclaimed acts in recent years, the Brooklyn-based band The National were the subject of a 2008 documentary titled A Skin, A Night. Directed by Vincent Moon, the hour-long film took an aesthetically stark look at the formation of the previous year’s album Boxer. Two records and a great deal of success later, the band is now the subject of another documentary and one that couldn’t be any more different.

Premiering as the opening night film of the Tribeca Film Festival, although Mistaken For Strangers takes its name from a single on the aforementioned album, it was created in conjunction with their worldwide tour for 2010’s High Violet. Due to its surroundings, the project could have easy gone the way of the standard, fan-only concert documentary, but the inclusion of a specific dynamic makes it one of the most entertaining, introspective music-related features in some time.

The story begins as frontman Matt Berninger invites his younger brother (by nine years), Tom Berninger, on the tour — in part to reconnect with him and in part to add another helping hand on the road. A filmmaker himself, still living in their hometown of Cincinnati, he takes it upon himself to capture the events with his own, modest camera and what follows is a surprisingly intimate look — not only at the band themselves, but our director. Berninger combines off-the-cuff interviews with the band (where they rarely get a word in), fly-on-the-wall observations of their daily tour activities and brief glimpses at actual concerts, but it is the emotional storyline of our filmmaker himself that separates this from your normal band documentary. A band of brothers with identical twins Bryce Dessner and Aaron Dessner, as well as Bryan Devendorf and Scott Devendorf, Berninger hones in on this connection, as he and his sibling couldn’t be farther apart.

As Matt Berninger often internalizes his thoughts and feelings, perhaps saving them to unleash on stage, his younger brother is always transparent, often quipping about different oddities he comes across while on this globe-spanning trip (with a comedic style not far removed from Zach Galifianakis) and taking a deeply personal self-reflexive approach. After the closest thing to a twist in the plot occurs (don’t worry, this isn’t Catfish), the film provides a unique opportunity to get to know these brothers, one we would have never imagined receiving had the younger Berninger not been completely himself when creating the film.

For fans and newcomers alike, Mistaken For Strangers is a raw, unembellished look at not only one of music’s rising bands, but of the creative process in general. Exemplified in early footage of their humble beginnings (with concerts sometimes not featuring a single audience member), Tom Berninger harnesses in on the theme of growth and the long road it takes to achieve something substantial — whether you are a now-famous musical act or siblings that have formed a renewed bond.