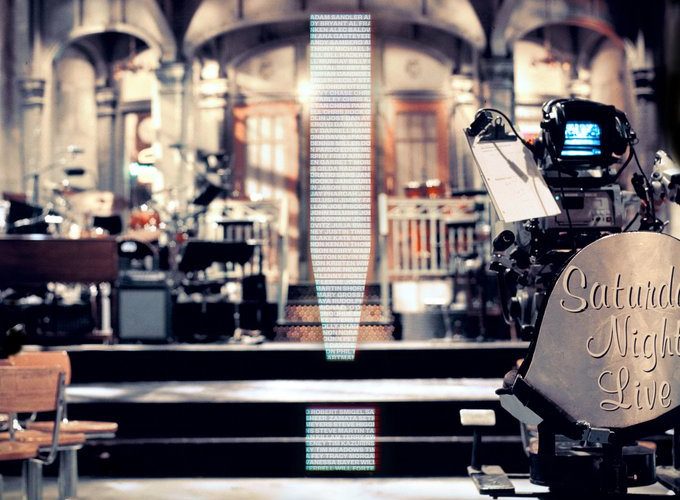 Unfortunately lacking deep insight into the Saturday Night Live dynasty, Live From New York! plays as a series of mini-documentaries that might come packaged with a best-of DVD. Directed by Bao Nguyen, who was granted access to past and present talent as well behind-the-scenes action via his producer Tom Broecker (who previously worked in SNL’s costume department) the picture plays like a by-the-numbers highlight reel. Any of its passages may warrant a larger documentary but Nguyen struggles to slay a dragon as large as a TV show that’s been on the air for 40 years.

Individual passages are quite interesting, including Nguyen’s take on treatment of women and minorities on air, from the “token black guy” in the show’s first cast, Garrett Morris, to the groundbreaking, taboo-shattering work of Leslie Jones, who may be interesting enough to warrant her own picture in the vein of Joan Rivers: A Piece of Work. Many of the talking head interviews come as a celebration of the show without a deep analysis of its role as a cultural institution. In fact, Meet the Press recently impaneled a group of political comedians to discuss the subject and in 15 minutes it was a more insightful conversation.

The roster of heavy hitters interviewed include the likes of fan Bill O’Reilly and former cast member and now Minnesota senator Al Franken, offering up their insights alongside political impersonators Tina Fey, Amy Poehler, Will Ferrell, and Darrell Hammond. The picture is a venerable who’s who of alumni which clouds what it could have been. The promising opening passages focus on New York in the 70’s when a strange Canadian (long-time showrunner Lorne Michaels) arrives at the request of NBC to do something that’s never been done before. However, the film quickly runs out of steam reverting to talking heads that perhaps should have ended up on the cutting room floor.

Nguyen and editors Mari Keiko Gonzalez and David Osit have years of tape to pull from. Restraint and focus might have made for a more engaging documentary instead of a simple best-of with commentary, striving to be all things SNL. In love with its subject, it does not allow for a critical distance that a non-fan film would offer and that is its fatal flaw; none of the subjects seem to be asked about more dramatic events that undoubtedly played out. Sure, there is some conflict that’s navigated with good humor (especially as Leslie Jones creates it in a way that a tame middle-of-the-road kind of show tends to ignore) and the film allows us to revisit some great moments, from John Goodman’s portrayal of Linda Tripp to the SNL’s profound return weeks after September 11th. But Live From New York! doesn’t really tell us anything new or profound. Pop culture observers and the socially aware I suspect will be as bored as I was with the lack of new information or insight presented here.

Live From New York! premiered at the 2015 Tribeca Film Festival and will be released in select theaters (via the Tug platform) on June 12th.