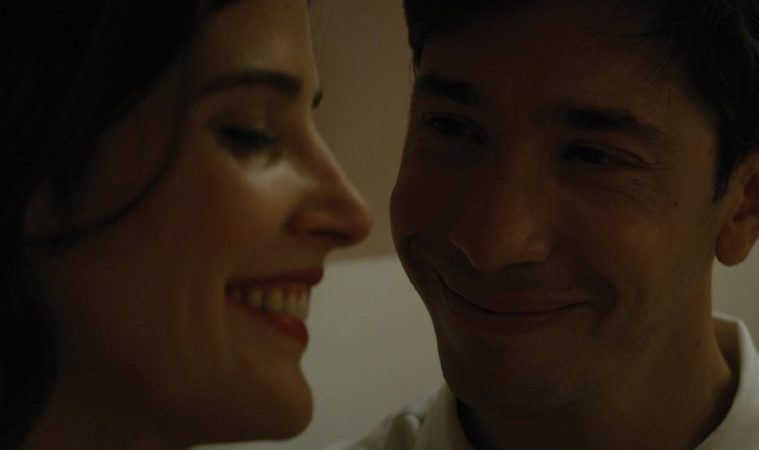 Tribeca Review: ‘Literally, Right Before Aaron’ is a Lame-Brained Rom-Com

It’s hard to imagine Literally, Right Before Aaron existing without The Graduate as a template. Ryan Eggold’s lame-brained paint-by-numbers romantic comedy relies a little too heavy on functioning as homage to the Mike Nichols classic. The story is one we’ve seen a thousand times before: a white heterosexual guy who barely gets by and is still finding himself in his late 20s (or so) struggles to get over the pretty girl that’s moved on. (500) Days of Summer at least told the same emotionally-charged story with its own gusto. Here a non-linear attempt is made with an obnoxious variable aspect ratio device: “present day” scenes take place in letterboxed scope, while moments in the past are full frame. Perhaps it’ll look cool on VOD.

Justin Long stars as our would-be white guy hero Adam who is still nursing a break-up with Allison (Cobie Smulders) who recently announced her engagement to a guy she met only a year ago, Aaron (Ryan Hansen). Friends take some pleasure in pointing out how good a sport Adam is and, when asked how long ago they dated, Adam says they met “Literally, right before Aaron.” If this event were to go viral, I’m sure it would inspire a response video from a Fred Durst look-a-like screaming into his cell phone, “What are you thinking? Be a man, leave Allison alone.” This is My Best Friend’s Wedding for an era when men have lost their standing in society and, naturally, the next step is to vote conservative.

All of this would be passable had Adam not been so whiny and simply passive aggressively stalked Allison on social media. Instead, he actually treks to San Francisco where an irritating bloke at the reception desk reminds him at every turn he’s alone. He is, however, hooked up with a friend’s cousin who agrees to be his wacky date, featuring Kristen Schaal doing her usual shtick.

Literally, Right Before Aaron is another example of a uninspired Justin Long-led romantic comedy, in the vein of Kat Coiro’s atrocity A Case of You, which premiered at Tribeca in 2013. He has played a few other characters besides the nice, yet slightly exasperating guy that tries too hard, but the majority have been variations on the same role since his break-out in Ed, which had its charms, but it’s been 17 years since it premiered.

Written and directed by Ryan Eggold, the film is somewhat perceptive about what it is like to be stuck in this situation, but it does nothing to improve on the premise, even wasting the brilliant Luis Guzman in a cameo that fails to delivery a single laugh. Literally, Right Before Aaron proves its own point: Allison was right to break up with this narcissist.

Literally, Right Before Aaron premiered at the Tribeca Film Festival and opens on September 29.