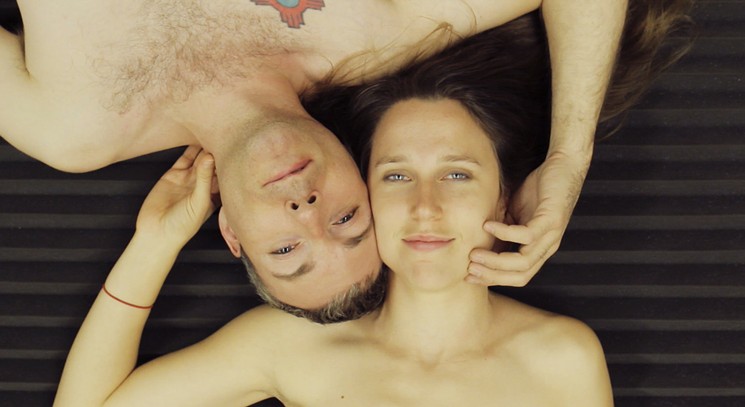 Tribeca Review: ‘Flames’ is a Narcissistic Doc-Fiction Hybrid That Burns Out Quickly

At about the hour mark, I was very glad to see the filmmakers and subjects of Flames, Zefrey Throwell and Josephine Decker, had entered some kind of counseling even if may also be, in part, a performance. Then again, what isn’t? Simultaneously, it appears they’re also in the editing room with an unnamed assistant cutting this brief film. Later they, of course, fight about what’s transpired and who has ownership of the film. It takes a certain amount of narcissism to make a film about one’s relationship and expect folks you don’t know to care. Flames is an attempt to capture such intimacy, yet it’s missing much of an emotional core. To put it into simpler terms: one evening I was at a concert with a fighting couple; it wasn’t a fun experience for any of us.

Framed by screenprints created by an unseen hand, we are oriented to various phases in the passionate affair of Throwell and Decker as they make love and then play with sock puppets in bed. Ashley Connor is credited as the film’s director of photography, along with twelve camera operators working in a variety of modes and technologies over the course of five years, looming as a third wheel over the course of this disjoined relationship. The union does last a trip to Bali, with the use of exotic locations and travel making Flames slightly more interesting than the early output of past Decker collaborator Joe Swanberg. However, it is unclear who tagged along for the trip; the act of having a third wheel to perform for seems to undermine the gimmick that is a core conceit of the picture.

There is a certain amount of irony in making work playfully exploring capitalistic exploitation while flying off to Bali and Maldives on vacation because you threw a dart and decided that’s where you’re going. However, this self-centered couple does not acknowledge it at any point. For all of Throwell and Decker’s attempts at intimacy allowing us in, there’s very little emotional attachment beyond their status as artists and their CV. It’s unhealthy to treat life as a performance, which is the central conceit of Flames and it’s my hope they are sincerely getting the help they need — unless this is indeed all part of a scripted performance.

There have been countless filmmakers that have made filmic diaries, from the work of the great Jonas Mekas to Robb Moss’ Riverdogs and follow-up The Same River Twice. Flames attempts to create its own history rooted in the here and the now as Decker and Throwell collaborate in various unnamed performances throughout the course of the film, including an obnoxious extended scene involving a naked poker game in a gallery window to protest capitalism.

The framing device along with the reflexivity at the core of the film, and a final break-down scene which takes place in where else but Times Square (a favorite of Throwell’s), all add another layer of artificiality. Here they argue about the authorship of the film and decide Throwell should take most of the credit and childishly agree to a title card that reads “Co-directed for a loooong time by Josephine Decker.” (Throwell is also credited as the film’s main editor.)

Real-life couples have created intimate portraits of themselves on screen, from Stan and Jane Brackage to Arin Crumbly and Susan Buice’s early podcast/documentary/narrative hybrid Four Eyed Monsters. Video journaling is nothing new and sadly Flames, though not without ambition, offers no improvement on the genre. If their relationship is indeed a performance and this film the documentation, why not at least make the constructed parts interesting for the viewing party?