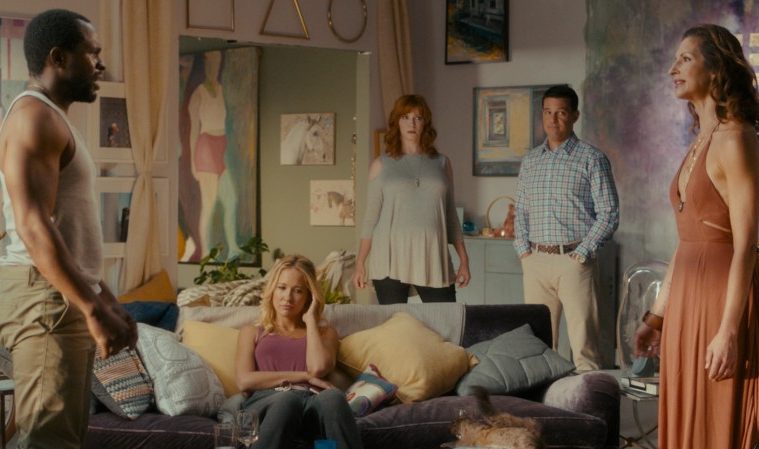 Tribeca Review: ‘Egg’ is a Dramatic Satire about Motherhood that Cracks

Setting up a cultural clash between two 40-something college pals, their partners, and a surrogate, Marianna Palka’s black comedy Egg, like her previous horror/comedy Bitch, sets its aim squarely on the patriarchy (specifically, men that think they’re allies) and the norms of motherhood. Written by Risa Mickenberg and mostly set entirely within the walls of a Brooklyn loft, Egg uses the traditional form of the sitcom to explore the life choices of free spirit artist Tina (Alysia Reiner) and Karen (Christina Hendricks), the wife of a business woman who isn’t as prepared to engage with “motherhood” as a political statement as her friend. Karen’s partner is a sports-obsessed alpha male, Don (David Alan Basche), a real estate developer who’s uncomfortable in this un-gentrified corner of Brooklyn. Tina’s husband Wayne (Gbenga Akinnagbe) is a freelancer comfortable rocking a “patriarchy is a bitch” t-shirt while biking around with Tina.

Starting as fodder for a cultural clash between friends that have grown apart and whose spouses don’t really care for each other, it’s the kind of material that Nicole Holofcener does best. Egg soon evolves into a dissection of motherhood as liberal and conservative values are challenged. Both Tina and Karen are expecting as we find out in the film’s first chapter. Tina and Wayne have sought the help of friend Kiki (Anna Camp), a fairly one-dimensional bubbly blonde. Tina views motherhood through a surrogate as a kind of conceptual art practice, and when Karen objects, Tina is happy to remind her that she’ll most likely outsource raising her kid to a nanny.

When the men leave to go pick-up Kiki, Tina and Karen connect, discussing their past, present, and future anxieties as old college friends often do when the spouses leave the room. With a pair of excellent performances, Reiner’s Tina is an over-the-top woman basking in privilege (and a trust fund) who marries her adorable boyfriend for tax reasons, while Hendrick’s Karen is unapologetically living her dream, and the film’s best scenes are when Palka focuses solely on the two.

The first screenplay adaptation for writer-director-actress Marianna Palka, whose films have dealt with sexual abuse (Good Dick), the fragmentation of her native Ireland in I’m The Same, and the expectations of motherhood in her hilarious dark comedy Bitch, Egg never quite finds its footing. Bursting with several good ideas that might have worked in individual moments, like when Tina shows Karen her virtual reality work inspired by her material conceptual art projects, the film loses its way with paper-thin characterization, including the husbands and Kiki. Like Tina’s idea, Egg throws a bunch of interesting ideas at the wall, hoping one will stick. Its most profound moments are the genuine ones between Tina and Karen, when the film isn’t trying to shock and provoke with dry satire that occasionally misses the mark.