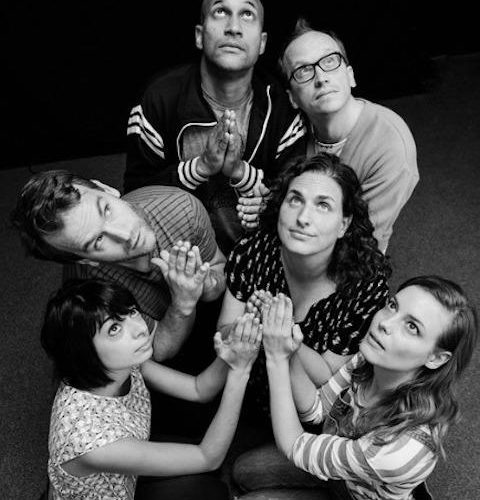 For his first feature Sleepwalk with Me, comedian-turned-director Mike Birbiglia adapted his semi-autobiographical one-man show, picking apart his anxieties and fears when it comes to the most personal aspects of his life. His follow-up, Don’t Think Twice, presents what is perhaps even more insular a world — that of the New York improv comedy scene and, more specifically, the shifting dynamics of a single group.

Made up of founding member Miles (Birbiglia), Jack (Keegan-Michael Key), Samantha (Gillian Jacobs), Allison (Kate Micucci), Lindsay (Tami Sagher), and Bill (Chris Gethard), the tight-knit troupe goes by the name of The Commune. Whether they succeed or fall flat on any given night, they don’t break any of their rules: always say “yes,” it’s all about the group, and don’t think. They may hold jobs as a delivery man, a hostess, or a hummus-sample provider, but they live and breathe for that small time when they’re on the stage, crafting situations that can never be repeated, no matter the size of the audience.

As in his directorial debut, and comedy in general, Birbiglia — who, as well as writing the screenplay, serves as producer alongside Ira Glass — is astute in blending humor with life’s hardships. Jealousy, betrayal, failure, unexpected pregnancy, and death naturally work their into the story. In lesser hands, one might expect this to deter from the experience, but this darker side only fosters a more believable portrait of camaraderie and what happens when success for some can cause fractures for the whole. It’s clear those in the ensemble have a background in this world, genuinely conveying what it’s like to dedicate one’s life to this specific craft. When she’s not on stage, Samantha is methodically memorizing her Katharine Hepburn impression or doing a bit in the middle of having sex with her boyfriend, Jack. There’s the sense that, even when they’re not in front of audience, a layer of performance is at play. When Bill’s father get in a motorcycle accident, there’s no hesitation when they all pack into a van to visit him in Philadelphia, and the trip back is filled with perhaps uncouth jokes that would feel inappropriate to those outside of the group.

The dream for most in this scene is to make it on Weekend Live, a clear riff on Saturday Night Live — going as far to include a Lorne Michaels-esque creator-producer. Over a decade prior, Miles had his audition and proclaims he was “inches away” of making the cut — while he lambasts the show as it airs, it’s clearly a life-long goal to get accepted. When one of the group’s members actually makes it onto the show, insecurities start to set in, and Birbiglia superbly captures that ambiguous middle ground the others share between being excited for their success and the permeating resentment of those on the outside.

Facing both the impending closure of The Commune’s theater and the fact their group will no longer ever be the same, questions of when pursuing one’s passion must end begin to set in. Bill remarks that if one’s ’20s are about going after your dreams, your ’30s are about when to give up hope. In navigating these upsetting but veritable truths, one wishes each of the characters in the troupe were given as much depth as the main trio of Key, Birbiglia, and especially Jacobs, whose character poignantly struggles with coming to terms with what makes her genuinely happy. The struggles of the others are touched, but never explored in a substantial way, instead mostly used as straightforward arcs that Birbiglia can wrap a little too neatly.

DP Joe Anderson fittingly doesn’t employ the same formal rigor as something like his debut Simon Killer, and his ever-moving camera does a commendable job of capturing the honest moments both on stage and off. While Don’t Think Twice depicts a certain world with incisive specificity, its themes of what success truly means are universal to anyone involved in the arts. The benchmarks for triumph may not be met for years or decades, but it’s in dedicating that time that defines one’s life-long relationships.

Don’t Think Twice is screening at the Tribeca Film Festival and will be release on July 22nd.