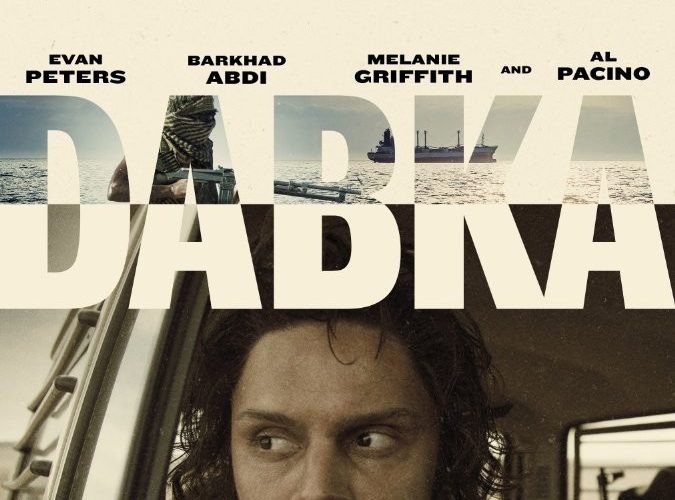 Tribeca Review: ‘The Pirates of Somalia’ is a Visceral, Authentic Journalism Drama

Opening with a voice-over explaining how a recent University of Toronto graduate went from surveying supermarket clerks about display placements to a becoming a freelance journalist running around Somalia, Bryan Buckley’s The Pirates of Somalia attempts to playfully tell the story of Jay Bahadur, author of The Pirates of Somalia: Inside Their Hidden World. Dabka takes an aggressive, masculine tone (one that’s almost, but not quite, frat boy-esque) that at times reminded me of Todd Phillips’ War Dogs, and it may be fitting. Here is the real-life story of a guy that finds himself miraculously with too much access and, at the same time, in over his head, and that charm (as well as naivety and lack of context), certainly helps in difficult situations.

Beginning somewhere in Ontario, Bahadur (played by Evan Peters) finds himself at the doctor after throwing his back out, leading to a chance encounter with veteran battlefield journalist Seymour Tolbin (Al Pacino) who walks him through the ins and outs of doing journalism in dangerous locations and making a name for himself in a closed profession. Bahadur gets lucky and finds himself raising money to travel to Somalia with an official government invite. It comes with strings, including a translator/handler, armed protection, and strict rules. Rules, of course, are meant to be broken as Bahadur finds himself under the spell of a beautiful young women Maryan (Sabrina Hassan), who happens to be one of many wives of the local warlord.

The Pirates of Somalia also contains buddy comedy elements with Captain Phillips’ Barkhad Abdi starring as Bahadur’s Obama-loving handler who risks it all to provide Bahadur the opportunity to embed with a real Somali pirate. Going through the “official” channels is part of the fun and absurdity of the traditional customs, like exchanging drugs for an on-the-record interview. The Pirates of Somalia knows the territory well and, through the eyes of its Canadian protagonist, is a film that explores the root causes of piracy, as shocking as they are to Bahadur.

The framing device is The Pirates of Somalia’s weakness, relying too often on silly voice-over as Bahadur tells his unique life’s story in a direct address as he’s miserable, confined to a basement apartment in his parents’ home, and driven mad by an unseen ex-girlfriend who won’t return his texts. These are all good reasons to go to Somalia to find his voice, but this conceit doesn’t quite work.

What Buckley’s script does get right is the thankless task of doing freelance journalism. He finds little support until Avril Benoit (Maria Vos), a CBC editor and subject matter expert, becomes his advocate back home. Initially finding rejection, he’s forced into a great depression, confined to a tiny jail cell-like room where he’s advised against opening the window for his own safety, and he slowly goes mad while going broke.

The Pirates of Somalia is a visceral, engaging, fast-paced journalism drama with authenticity and a few rough edges that surely would have gotten sanded down had Buckley made the film within the Hollywood studio system. It’s an admirable effort employing many Somali refugees (as indicated in the film’s closing credits) and a story worth telling even if it’s not nearly as serious or as objective as a documentary on the subject might have been.

The Pirates of Somalia premiered at the Tribeca Film Festival and opens on December 8.