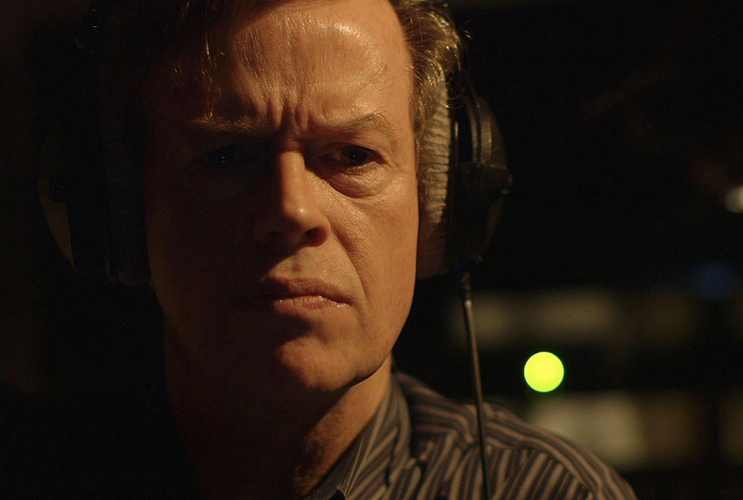 Those that find Noah Baumbach too neurotic ought to stand clear of a entirely different brand of neurosis from American-Turkish Brooklynite writer-director-star Onur Tukel who made a name for himself last year at Tribeca with the vampire picture Summer of Blood (fittingly shortened to SOB on its poster). Tukel again stars as Ron Welz, a high school teacher that’s either awful or a brilliant provocateur much like Tukel. Shifting from a vampires to yuppie revenge comedy Applesauce grew on me much like a fungus you learn to love. While Summer of Blood overstayed its welcome, growing more absurd by the moment, Applesauce is a far more polished effort with a larger budget and a great deal more ambition.

Opening on the studio of Stevie Bricks (Dylan Baker) a kind of shock jock whose antics seem rather mild compared to satellite radio, he poses the following question to his listeners, “What’s the worst thing you’ve ever done?” Ron calls in and is abruptly cut-off by wife Nicki (Trieste Kelly Dunn), however, this isn’t last time something gets cut off here.

Out to dinner with friends Les (Max Casella of Doogie Howser MD fame) and Kate (Jennifer Prediger) Ron finishes his story. Apparently drunk one night in college he slammed a heavy door on kid he was fighting with, severing a few fingers. Floored by the story, Kate and Les share their “worsts” with each other. Les once urinated on a puppy and Kate had a brief, drunk, meaningless tryst with our hero Ron. Revenge ensues in several ugly passages designed to heighten Ron’s awareness, tackling subjects like intimacy, marriage and gentrification building to an odd conclusion and an unexpected end game. Everyone here has blood on their hands starting with Ron, a narcissist actively working to deny it.

Following the revelation of infidelity, a complex game of psychological revenge is held as Kate and Nicki try to keep the friendship together for reasons unknown. Each are harboring their own baggage yet intent to criticize their husbands’ behavior and both are unfazed by the various body parts Ron finds. They are either sent to him or dropped in his Laundromat dryer while he’s off having an artisan cupcake. A funny gag involving a crack team of NYPD investigators works, as does the film, emphasizing the perverse comedy of manners at play.

Effective, funny, odd and unique, Tukel is a unique comedy voice that could emerge as a break-out star in the context of a Judd Apatow picture (although he may be too old and chubby for primetime, a fact he continually reminds us of). Applesauce is largely a step in the right direction towards Tukel’s development of an interesting comedic voice, even if his efforts as writer-director are a little scattered. With some structural restraint he might gain some significant traction, while his punch lines, obnoxious as they can be, mostly land.