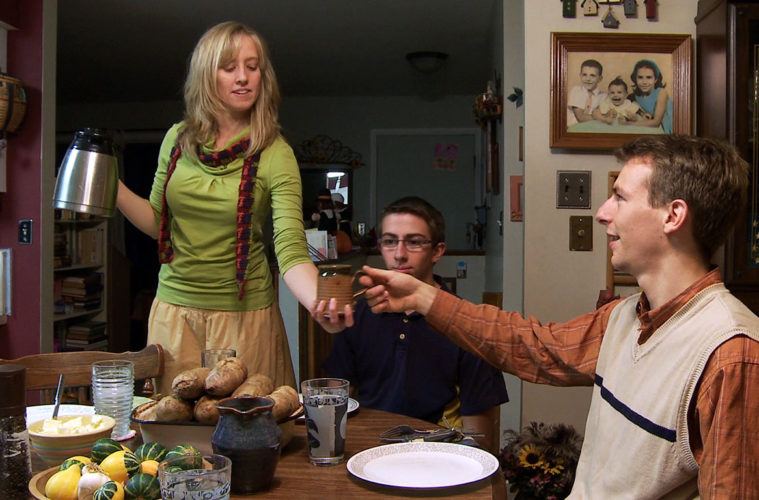 Arriving in New York at the Tribeca Film Festival in front of a presumably liberal audience, A Courtship is a fascinatingly personal look at the Bible belt and the tradition of Christian courtship. The practiced, faithful readers of this site will recall this was the subject of Old Fashioned, a narrative theatrical feature released as counter programming the same weekend 50 Shades of Grey hit screens. A Courtship takes a frank approach full of doubt, one told from a secular perspective as it observes with fascination without criticizing the practice.

Directed by reality television show producer Amy Kohn, A Courtship is an intimate look at the subject, featuring Ron Wright, owner of beforethekiss.com, an e-commerce resource for the practice. Wright and his wife Dawn function as counselors to their unofficially adopted daughter Kelly Boggus, an attractive 33-year-old who evolved towards devout Catholicism in college. Unmarried, Boggus commits herself to the practice of courtship in which Ron essentially dates and vets interested men. The courtship process removes the physicality and emotion from the process allowing partners to take the next step – including kissing – when they commit to marriage. While the couple at the center of Old Fashioned benefited from an extensive questionnaire booklet, Ron function as the in-between.

Conflict arises in a frank scene between Kelly, her biological mother, and stepfather. Both can understand abstaining from sex, but cannot quite understand why an attractive 33-year old would opt out of dating. A potential partner, Ross, arrives on the scene and survives an extensive vetting from Ron and Dawn. All parties, for the record, are excellent sports, agreeing to appear before Kohn’s lens and the filmmaker remains objective despite the temptation to explore.

Passionately devout, Ron and Dawn once lived a secular life that led to what he classifies as an emotional divorce that had been overcome by prayer. Ron and Dawn remain quite engaging characters along with their biological daughters who are prepped from birth to focus on what they believe to be God’s plan for them: a focus on family, children and home before career.

Kohn presents the issues directly, even though the documentary stretches its premise a tad too thin at 71 minutes. Noticeable technical imperfections aside, A Courtship might have benefited from additional narrators; an understanding of the tradition and its history, which surely did not originate with Ron and Dawn, seems to be missing. Engaging and alarming, A Courtship is a frank look at a culture that is foreign and exotic here in New York City. The problem as well is that Kohn doesn’t quite take it a step further: a community must exist and while Ron and Dawn have made it a mission to increase the pool of courtship candidates for their daughters, other voices might have added additional credibility to the narrative. Perhaps, as the documentary makes very clear, certain elements of theology are open to interpretation as a warning flag appears, placing Kelly in an awkward situation.

A Courtship is now screening at the Tribeca Film Festival.