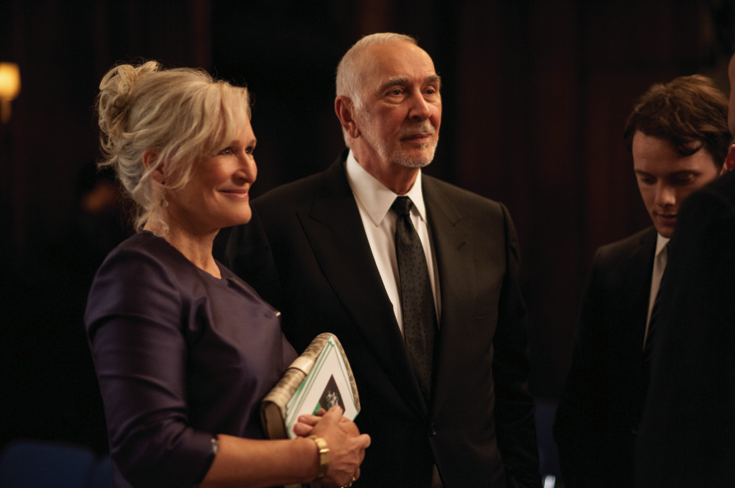 Saccharine, overwhelmingly melodramatic and filmed with a glossy sheen, one is either quickly won over by the charms of the romantic drama 5 to 7 or simply turned off from the start. The premise is simple: Brian (Anton Yelchin) is an aspiring writer with a wall full of rejection letters, used for motivation. As his voice-over will tell you, in New York City you’re always 20 feet away from someone you know or someone you’re meant to know. Putting this sentiment to the test, one day he encounters the ravishing Arielle (Bérénice Marlohe), eight years his elder, and for the first time ever, tries his chances at wooing her.

Sparks fly and she tells him she’s at the same location (the swanky St. Regis New York, located in midtown Manhattan) every Friday at the same time, but only available from the hours of five to seven, also known as “cinq a sept,” the moment in one’s day where they don’t need to be accounted for. As any interested party might, he returns but soon learns that she’s actually married to a French Diplomat (Lambert Wilson) and has a pair of children. After a few weeks of contemplation, he decides to continue the relationship, an open one that he learns her husband also has with his own mistress (Olivia Thirlby). As an American, Yelchin’s character is taken aback by this proposition, one that writer/director Victor Levin concocted based on his own experiences in France at a younger age. With their relationship growing deeper, more oddities and awkwardness surface amongst this culture clash — including amusing family meetings, notably with Brian’s humorous parents (Frank Langella and Glenn Close) — but their mutual attraction always at the center.

Wearing its heart (and everything else) on its sleeve, 5 to 7 is the sort of drama that chalks up little to the imagination. Levin guides as through his rollercoaster of an emotional journey with a rousing score by Danny Bensi and Saunder Jurriaans, leaving no no room for subtlety along the way. And aside from a tawdry all-encompassing montage towards the end, I ate nearly all of it up.

Levin, a former writer and producer on Mad Men, and cinematographer Arnaud Potier capture the story (and just as importantly, the city) with a loving eye, giving way to a classical, earnest romantic drama we rarely see on screen with any sort of notable cast. Whether it’s a long take of our leading couple walking through Central Park or a back-and-forth lesson on culture differences (including a viewing of François Truffaut classic Jules and Jim, nodding to the plot here), Levin’s sharply written script remains thoroughly engaging.

What could have been easy subplots that a lesser romantic film would give into — notably a potentially burgeoning relationship with Yelchin and Thirlby’s characters — Levin intelligently keeps focused on the relationship at the center. In her first role following the break-out that was Skyfall, Bérénice Marlohe leaves a much more significant impression than in her Bond film, alluring the audience, along with Brian, with a captivating, matter-of-fact maturity. As Yelchin’s character inevitably wants more, the script, in step with hammering home how one should feel walking away from the film, ambitiously pulls off a satisfying conclusion.

A recurring motif throughout is the inscription on many benches sprawled across Central Park. Often attempting to encapsulate an entire life or series of events in a small box can prove to be a difficult task, one that leaves certain distinctive quirks out of the equation. With 5 to 7, Levin has created a film that is reminiscent of one of these plaques: far-reaching, one-note, but something altogether endearing.

5 to 7 premiered at the Tribeca Film Festival and opens on April 10th. See the trailer above.