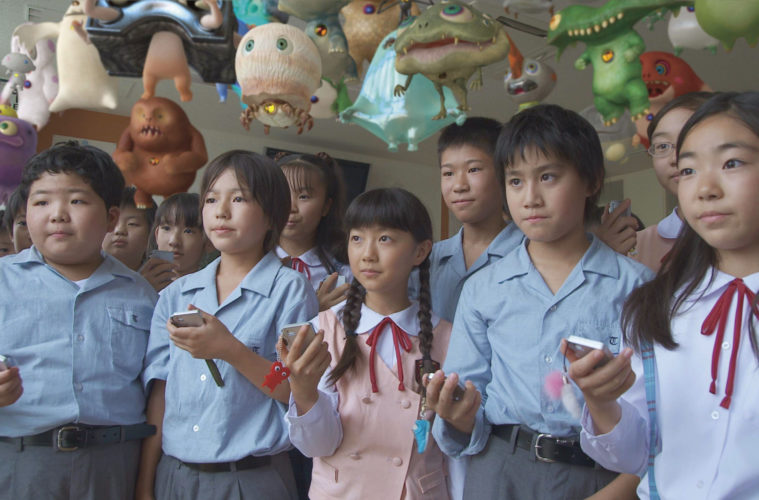 Regardless of the closing tag promising a May 2014 showing, Jellyfish Eyes, the first feature from Japanese artist Takashi Murakami, is entering a limited release this Wednesday. (Two years after a theatrical debut in its native country, that is.) This makes now as good a time as any to highlight the trailer filled with oddball animation, high-concept narrative possibilities, and, above all else, the promise of a distinctly Japanese cinematic experience.

Don’t take the obvious transplanting of Murakami’s art as the only national-cultural signifier, though. Promised herein is “A portrayal of Japan after the Fukushima nuclear disaster,” one (very, very) clearly rooted in children’s fantasy and game-playing — a bit of Pokémon here, a little kaiju there, and some video-game iconography to boot. Limited as its run in theaters will prove, this may be the summer spectacle to beat. Will there soon be an ideal way to view it on home video?

Legendary pop artist Takashi Murakami makes his directorial debut with genre-defying, coming-of-age fantasy. A tale of family, friendship and loyalty set in a world of fantasy that draws as much upon Japanese popular culture as it does from Hollywood movies and Japanese Manga.

Having moved to the country with his mother following the death of his father, young Masashi (Takuto Sueoka) immediately makes a most unlikely friend: a flying, jellyfish-like sprite that he nicknames Kurage-bo. Taking Kurage-bo under his wing and into the classroom, Masashi soon discovers that his schoolmates have similar friends – and that they, their creators, and the town itself are not all they seem to be.