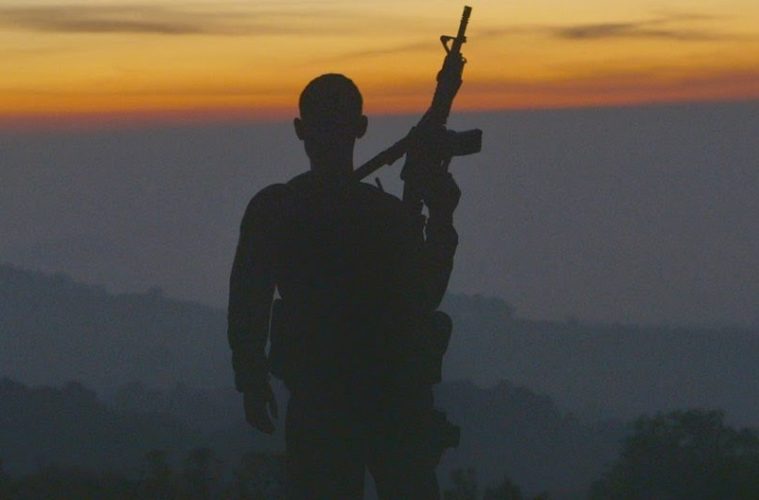 As we await the release of Sicario this fall, next month brings an acclaimed documentary that takes a real-life look at the drug conflict on the U.S.-Mexico border. Premiering at Sundance Film Festival earlier this year, where it picked up the top documentary prize in its category (along with one for cinematography), Matthew Heineman‘s Cartel Land is an intense behind-the-scenes look at the ongoing fight. Executive produced by Kathryn Bigelow, the first gripping trailer has now arrived.

We said in our review, Following in the footsteps of the late, great, cinematic badass Michael Glawogger, whose work often put him on the front-lines of the most dangerous jobs (or at the very least unsavory situations), Cartel Land finds a certain humanity in the work of militias on both sides of the U.S.-Mexico border cartel fights. Directed, produced and filmed by Matthew Heineman, the documentary dives deep into vigilante culture, chronicling the struggles of the Autodefensas, an organized militia who takes up arms against the Knights Templar. On the U.S. side of the border in Arizona’s Altar Valley, Tim “Nailer” Foley heads the Arizona Border Recon, a group that patrols the Valley, turning over smugglers and their advance men to US.. Customs and Border Patrol. The approaches are similar while the motivations of each are complex; Nailer and crew’s story is overshadowed in Cartel Land by the compelling, immediate on-the-ground reporting of its Mexican passages.” Check out the trailer and poster below.

With unprecedented access, Cartel Land is a harrowing look at the journeys of two modern-day vigilante groups and their shared enemy—the murderous Mexican drug cartels. In the Mexican state of Michoacán, Dr. Jose Mireles, a small-town physician known as “El Doctor,” leads the Autodefensas, a citizen uprising against the violent Knights Templar drug cartel that has wreaked havoc on the region for years. Meanwhile, in Arizona’s Altar Valley—a narrow, 52-mile-long desert corridor known as Cocaine Alley—Tim “Nailer” Foley, an American veteran, heads a small paramilitary group called Arizona Border Recon, whose goal is to stop Mexico’s drug wars from seeping across our border.