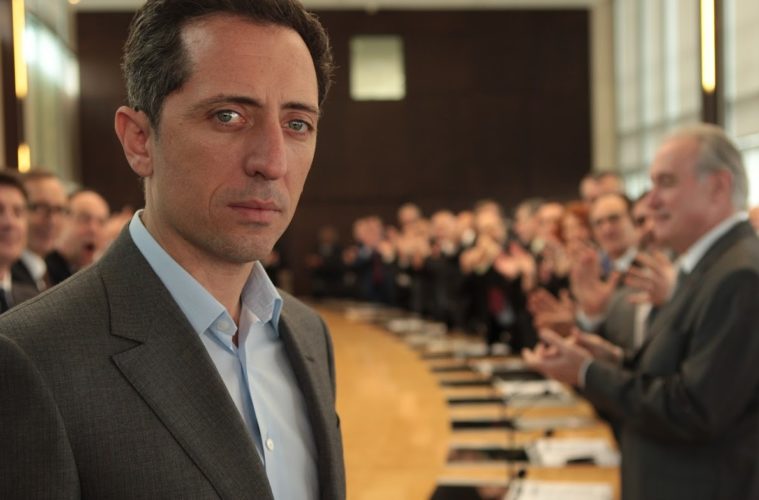 Costa-Gavras may never make another film as acclaimed, influential, and lasting as his landmark 1969 picture, Z, but the man’s career has nevertheless facilitated the continued attention toward his efforts, whenever they may come. The next such picture, Capital, is following its TIFF 2012 premiere with a limited release this month, and, with that so close ahead, a trailer is needed. What we have serves as an encouraging sign: Gad Elmaleh (Mood Indigo) plays the hotshot executive of a big-time company who gets in over his head doing dirty financial dealings, all while Gabriel Byrne scowls through a cell phone and various trickery is played.

Although a trailer released some 13 months ago advertised a very different film, what’s here might better fit the material at hand; we’ve seen this kind of lifestyle portrayed to such an extent several times over, after all, and with The Wolf of Wall Street potentially not hitting this year, Costa-Gavras could step in to supply the financial hijinks we’ve been expecting for some time. As far as our options go, the replacement could always be so, so much worse. When the CEO of France’s Phenix Bank collapses on the golf course, Machiavellian young executive Marc Tourneuil (Gad Elmaleh, ‘Midnight in Paris’) is crowned as his replacement.  A whirlwind of ruthless ambition, power struggles, greed and deception ensues as Tourneuil’s brutal ascent is jeopardized by a hostile takeover attempt from a large American hedge fund led by Dittmar Rigule (Gabriel Byrne, ‘Vikings,’ ‘In Treatment’), erotic distractions from international supermodel Nassim (Liya Kebede), and adversaries with an agenda for destruction. CAPITAL is a pointed commentary on how the Darwinian world of contemporary capitalism plays itself out across the global financial stage.

Based on the book Le Capital by Stéphane Osmont, the film is directed by Costa-Gavras and written by Costa-Gavras, Jean-Claude Grumberg and Karim Boukercha. The film also stars Natacha Regnier and Celine Sallette.”

Capital will open in limited release on October 25.

Does what’s shown above indicate a fine next step in Costa-Gavras’ career?