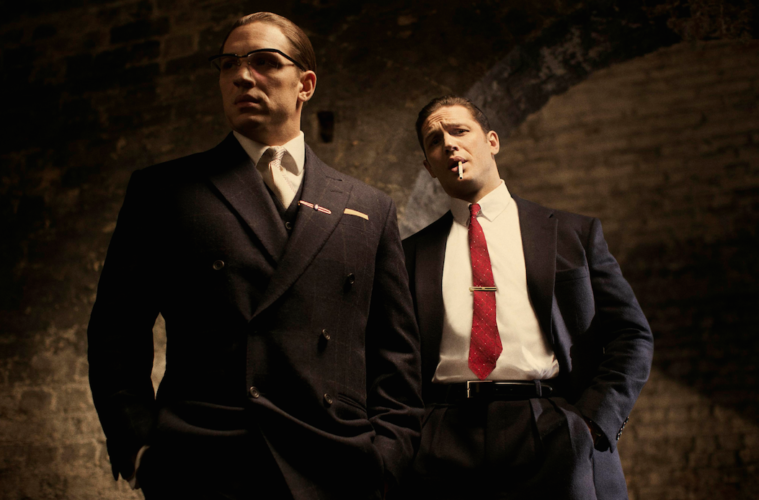 Although he may have been the title character, Charlize Theron pretty much stole the show from Tom Hardy in Mad Max: Fury Road. However, the actor will get another chance at a leading role, two-fold, come fall. Coming from writer-director Brian Helgeland (L.A. Confidential), Legend follows Hardy taking on the dual roles of twins Ron and Reggie Kray and their reign of crime in the 1960’s as told in John Pearson’s book The Profession of Violence.

With the film now set for an October release in the U.S., Universal Pictures have released the first domestic trailer. It shows off more comedy than expected, with Hardy having some fun in the two roles, even going up against himself. Also featuring Emily Browning, David Thewlis, Christopher Eccleston, Chazz Palminteri, Tara Fitzgerald, and Taron Egerton, check it out below, along with the poster and a quote from Helgeland via Yahoo.

He went, from hour to hour, he would be one or the other. There were exceptions, but he usually Reggie during the first part of the day because it was the bigger part. Then many days Ron didn’t work at all. But if it was the two of them, Tom and I would rehearse in the morning and he’d read both parts and we’d work out blocking. He’d record Ron’s side of the dialogue, give it to sound guy who’d cut it together in a way he could fit his Reggie dialogue in between his Ron dialogue. Then he’d go off to hair and makeup and come back. He would wear an earpiece that no one could see. We would play Ron in his ear. His stunt man was his body double for Reggie and Ron so he could have someone in front of him to look at. Then we’d play back Reggie’s recording in his ear when he was playing Ron.

From Academy Award® winner Brian Helgeland comes the true story of the rise and fall of London’s most notorious gangsters, Reggie and Ron Kray, both portrayed by Tom Hardy in an amazing double performance. LEGEND is a classic crime thriller taking us into the secret history of the 1960s and the extraordinary events that secured the infamy of the Kray Twins.