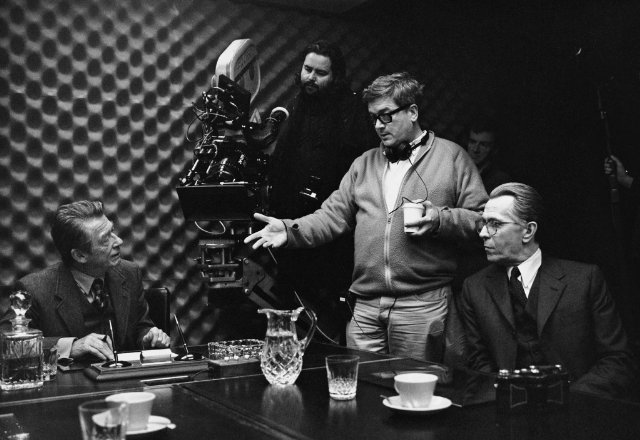 Although they’ve worked together since Memento, cinematographer Wally Pfister has perhaps the strongest reason imaginable to break away from Christopher Nolan, as he’ll be shooting his directorial debut Transcendence next month. With Nolan now prepping his next work, the sci-fi feature Interstellar, for a summer shoot, many wondered who would take the reigns behind the camera.

An answer has now arrived, as Film Abides (via Nolan Fans) report that Hoyte Van Hoytema has been recruited for the gig. While the name will be unfamiliar to many, he’s the man who helped to give us the stunning images in Tomas Alfredson‘s Let the Right One In and Tinker Tailor Soldier Spy, as well as David O. Russell‘s The Fighter. His work can also be seen in Spike Jonze‘s Her later this year, and it’s hard to think of a better fit for Nolan’s style than Hoytema, who will be employing the use of IMAX cameras for the first time in his career.

Little is known about Nolan’s next film, but it’s been revealed that the story “depicts a heroic interstellar voyage to the furthest borders of our scientific understanding.” It is described as a “complex and multi-layered” sci-fi picture that follows “explorers [who] travel through a wormhole,” with conceits such as alternate dimensions and time travel working their way in. Starring Matthew McConaughey and Anne Hathaway, the former actor recently sat down with Coming Soon to talk a bit about the galaxy he’ll be occupying in the film, and cleverly avoiding pretty much any details on his role in Nolan’s film. When asked about the project, his answer can be read below.

“That is much more of an aspect I can realize and get my head around, but it doesn’t seem that far. It’s that same thing when you’re a kid, your neighborhood is as far as you can go. Then you grow older it’s your county, your city, your state, your nation and then all of a sudden continents become part of your backyard. Then as you get older you go, ‘Well the moon’s just a chip shot away too.’ Then you wonder what’s in our solar system, it’s just one solar system. How many solar systems make up the universe. How many universes are there. Its an idea I can’t scientifically lay out to you, but it started off when Galileo said, ‘The world’s not flat.’ Then the other man went, ‘Yes it is!’

“It’s very interesting, I’ve met people in the last year that walk this Earth that argued with me that the world is still flat. I’ve met some people when I was in Africa and I had a wonderful discussion with them. In 2010 to be in an African desert having a conversation with some men laughing at you saying if you walk that way a long, long, long, long time you’ll come up over here, they thought that was the funniest joke in the world. They were like, ‘If you walk that way a long time you go boom, bye bye, fall off.'”

Interstellar begins production this summer and then hits regular theaters and IMAX on November 7th, 2014.

Are you happy with Nolan’s choice of cinematographer?