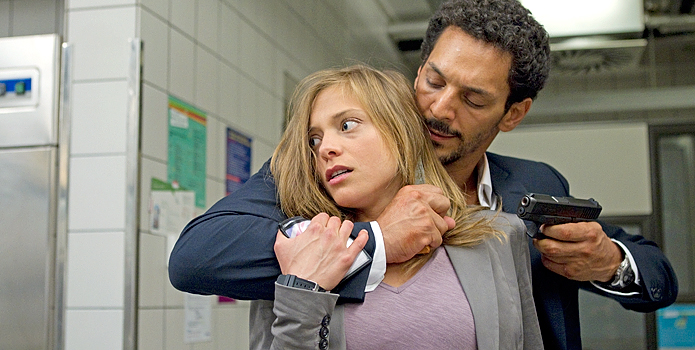 The Midnight Madness sidebar at the Toronto International Film Festival is usually filled with your fair share of blood, gore and other twisted torment. Part of their currently stellar line-up this year (just look at The Raid, Kill List, God Bless America and more coming) is Sleepless Night. Breaking the mold of what is usually present in the late Ryerson showings, Frédéric Jardin‘s French crime thriller is all about upping the tension with every scene.

Vincent (Tomer Sisley) is a police lieutenant who also does some side work as a drug mule. A drop-off goes bad and the coke gets stuck with Vincent. The next day his son is kidnapped by the thug Jose Marciano (Serge Riaboukine) who also happens to own a massive nightclub. Going to retrieve his son, a pair of cops are also on his tail to stir things up, followed by the criminals who are on the receiving end of the cocaine trade-off gone wrong. With 90% of the film taking place in Marcianos’ massive nightclub, Vincent could occasionally be mistaken for Tom Cruise‘s Collateral character of the same name in these crowded dance-floor scenes, guided by a slick techno beat. The smart script from Nicolas Saada and Jardin continually take the story in a new direction, defying expectations. They’ve crafted a lead character who is smarter than the audience, making run-of-the-mill American thrillers in the same vein seem a bit duller. He is always one step of everyone, finding inventive ways to change the dire situations to his advantage.

The cinematography is frenetic, but shot selections are carefully considered. A long third act fight in a kitchen features our lead an opponent reach their physical breaking points, but push past in a battle of wits and sheer duress. Other action scenes pop-in quick laughs as Vincent dodges in-and-out from his many adversaries through the tight quarters of this sprawling night club. The expertly-paced film is full of callbacks and constantly one-ups itself with evolving thrills.

Expect this one to get snatched up quickly and if that isn’t the case, then a US remake hitting in a few years. Check out a video review I recorded with Peter Sciretta from /Film and Alex Billington from First Showing below.