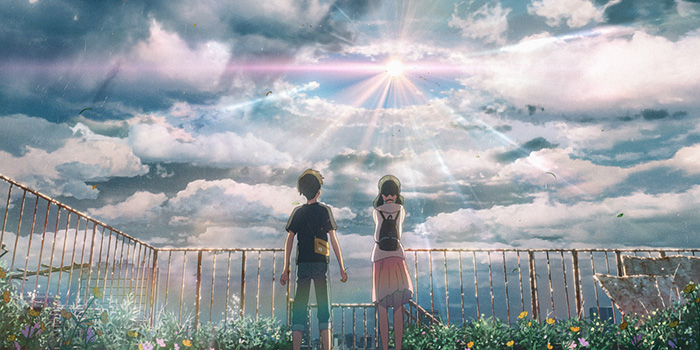 TIFF Review: ‘Weathering with You’ is an Exhilarating Tale of Friendship from ‘Your Name’ Director Makoto Shinkai

Teenagers get plenty of flack these days with derogatory labels thrust upon them by older generations refusing to truly look outside their window at how much the world has changed. They’ve a lot to shoulder with the pressure of living up to impossible and antiquated expectations, confusion as to a future and identity they can’t quite decipher yet, and the crippling reality that the world around them is literally crumbling via war, genocide, and climate change. Kids used to run from home as a means of rebellion or cry for help, but now it’s sometimes out of necessity. Survival is staying off the grid so as not to be pushed into a damaging situation dictated by external forces that don’t understand or, worse yet, won’t listen.

What is Amano Hina (Nana Mori) supposed to do after her mother dies? Let child services take her brother Nagi Sakura Kiryu) away despite turning eighteen soon? No. She keeps him under wing instead, quits school, and looks for whatever part-time work she can to keep them afloat. There’s no time to grieve when one mistake will rip her family apart. So she makes a different type of lapse in judgment by seeking employment through a high risk, high reward profession instead. That’s when Morishima Hodaka (Kotaro Daigo) takes her arm and runs before even knowing her name. He sees the situation and wants to assist despite putting himself in the spotlight as a runaway for reasons unknown. And that’s okay since his word should be reason enough.

Because Weathering with You is a Makoto Shinkai film, however, things don’t stop at two teens trying to survive on their own in a society that’s made it illegal to walk the streets as an unaccompanied minor. We must also talk about their current environment and its record-breaking rainfall erasing summer right off the calendar. With scientists unable to explain what’s happening, psychics pick up the slack. They speak about legends and Weather Maidens with Dragon properties (bringing the storms) and Sun properties (breaking them apart). It’s all a bunch of baloney Hodaka’s boss Keisuke Suga (Shun Oguri) uses to sell tabloids until Hina reveals what she can do when praying towards the sky. She’s a bona fide Sunshine Girl—the key to saving Tokyo from natural disaster. Her newfound power becomes the kids’ calling overnight. People desperate for clear skies in order to have fun, make money, or honor their ancestors hire Hina to deliver an optimal forecast. She can only work her magic for a limited time on a small area, but it brings her a happiness she hasn’t experience since before her mother passed away. The same goes for Hodaka considering his time on the streets without food and the thanklessly menial work Mr. Suga and his (maybe) mistress Natsumi (Tsubasa Honda) assign. Suddenly these two teenagers forced into the shadows with the authorities forever looming above are living again to bring peace and prosperity to the masses. Like similarly fantastical gifts, however, Hina’s abilities do come at a price: her own wellbeing.

While that truth is depressing to confront, it’s something that’s wholly within her control. The police aren’t the ones dictating whether or not she’ll still be by Nagi’s side to act as sister and mother once everything is said and done. She’s already taken on the responsibility of caring for him, so what’s to prevent her from widening that scope and saving the entire city? Hodaka will hear nothing of it of course, but how is that projection of his wants upon her any different than those of the society they’re running from? While everyone else tries to escape the future others have supplied, Hina is ready to make her own. Doing so won’t be an easy decision to make, but the most important ones never are.

This theme of stepping up and embracing responsibility for one’s actions permeates the entire film. Hodaka will inevitably have to face his past before figuring out what’s next. Mr. Suga will need to reconcile the pain of loss with the possibility of love. And Natsumi strives to find a place in this world as more than an afterthought. They each thought they had to do these things alone until finding one another to be rocks they can rely on without reservation. Hina can be reckless because she knows Nagi has people who care about him and Hodaka can think about sacrificing himself to save her while the rest run interference and give him time. The world might have finally stopped dismissing their dreams as deficient to long-standing tradition. How Shinkai gets there isn’t always with the cleanest choices (there’s an out-of-place subplot dealing with illegal guns that almost seems to ratchet up drama too much and how the weather impacts Tokyo’s landscape flirts with a climate change denier attitude), but you can’t ignore the journey’s intent or exhilaration. The imagery of water fish swimming in the sky while Hina floats towards an uncharted “marine” habitat of clouds is stunning to behold and the humor earns some big laughs even if much of it centers around teenage horniness and sex-based assumptions. Beneath all that, though, is a resonant tale of empathy and romance as the bond of friendship between Hodaka and Hina naturally blossoms thanks to them becoming the other’s constant within an ever-fluctuating existence.

They’ll both have an opportunity to leave their mark and suffer the consequences therein, but they’ll be stronger and more ready to combat whatever arises. The fear of the known that had caused them to stay hidden evaporates as they become willing to put themselves on the line for their friends. And if the fire within never extinguishes, they’ll make good on promises much easier to forget than keep. It’s therefore high time to shift stories from millennials and subsequent generations destroying “our way of life” into how they’re creating new beginnings. We should be giving our youth a lot more credit than we deserved at their age because we never dealt with half as much chaos and blame as they do now. The old ways should die.

Weathering with You screened at the Toronto International Film Festival and opens on January 17.