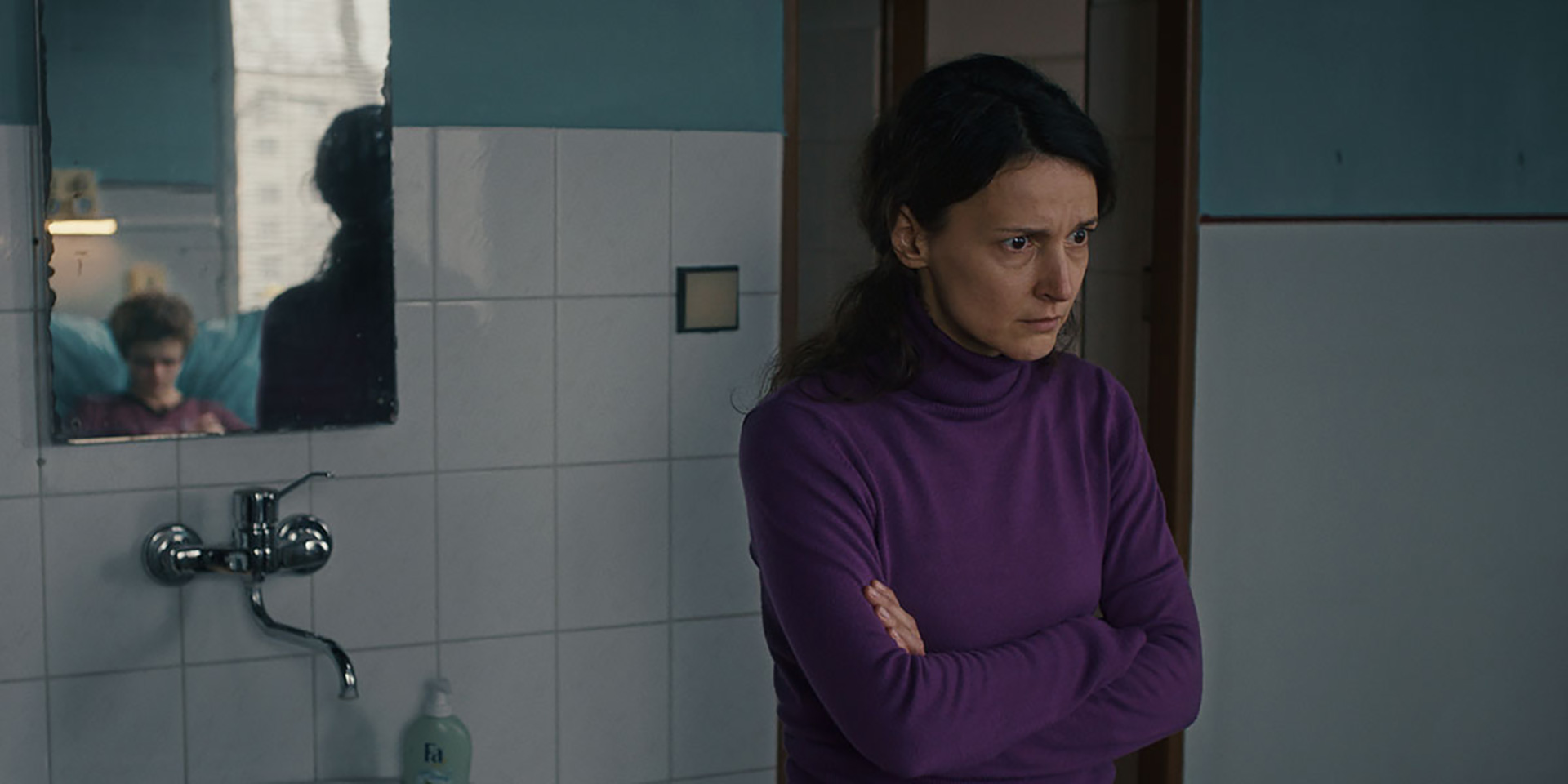 There’s a reason director Michal Blasko and screenwriter Jakub Medvecký wrote Irina (Vita Smachelyuk) and her son Igor (Gleb Kuchuk) as Ukrainian nationals. Victim doesn’t quite work if they are native Czechs; its impact demands that they also be outsiders attempting to build a home just like the Roma they and their host country are quick to villainize. Not when they should know better. They should be able to understand what it’s like to come to a foreign place and start over again. We see it too as Irina converses with incoming Ukrainians hoping to find as much success as she has. What, therefore, is the difference? Why does an entire city band together for her and vociferously denounce the Roma? She is white.

Painting her as the heroic mother of a promising gymnast currently laying in a hospital bed with zero hope of continuing the sport after three thugs assaulted him in the stairwell of his own home serves their purposes. Not because white nationalists care about their struggle, but because Igor told the cops his attackers were not white. This story is thus perfectly suited for manipulative dog whistles. Here’s this “wholesome”-looking single mother to rally around and hide behind while spewing their hate. They can be her spokespeople, turn her words to their benefit, and do whatever they can to call for violence against “Roma criminals” without saying those exact words themselves. And Irina is left to wonder what just happened—reaping the spoils while lamenting the cost.

What’s the alternative? Align with the racist Czechs and let the wave of support propel her to the citizenship she’s strove to earn for years or stand with the Roma and be discarded right along with them as a foreigner unfit for their streets. Every decision Irina makes must suddenly weigh the consequences not only for herself, but for those caught in the crossfire. Because it’s easy to blindly accuse “the other” for a crime. It’s easy to embrace the prejudiced hate others have been weaponizing for centuries when your flesh and blood has been wronged by them. Is seeking justice worth the added suffering for an entire people, though? Should countless innocents scooped up in the wake have to pay for the transgressions of a few? No.

Now think about all this happening on account of a lie. What if the vitriol outward and good will inward is in response to a scared and impulsive kid who thought he was insulating himself from blame while also targeting a ghost that could never get caught? Rather than foment a powder keg of aggression and violence to simply depict what it’s like for someone caught in the middle as an outsider just as easily lumped in with the target of the majority’s ire as she is passing as one of them through complicit silence, Blasko and Medvecký provide a look at how easy it is for that same person to be the unwitting orchestrator of said violence by refusing to question where her own anger originates.

Because Irina does possess rage. When she finds out Igor was attacked by three non-white boys who probably live in the same apartment building as them, she becomes emboldened to rock a boat she never would have rocked before. When she can pass as white European, however, she can afford that sort of entitlement. She can get caught arguing in the hallway with a Roma mother and know the neighbors will take her side on instinct alone. Does that make her no better than the white nationalists usurping her tragedy for political gain? No. It’s more complex than that. If, however, she discovers none of this rage is warranted—that Igor’s injury was his own fault—and she still lets it continue? Well. That’s something altogether different.

The filmmakers draw numerous parallels to force us to see just how thin the line is between these worlds. We know Irina isn’t a Neo-Nazi, but that doesn’t mean she won’t piggyback on their agenda to make her life easier. And it doesn’t simply stop upon realizing this fact since her guilt even finds a way to take sides. She is constantly being given the chance to do the right thing and explain to Officer Novotny (Igor Chmela) that a mistake was made. Face the consequences of her own actions so others don’t have to face them for her. And each time it appears she’ll finally stand-up and do exactly that, she embraces a half-measure instead while the power of one lie literally turns this city upside down.

It’s a challenging role performed beautifully by Smachelyuk. She must be a doting mother, a disappointed parent, an empathetic realist, and a willful opportunist all at once. And she must do it while speaking a second language inside a country that carries the threat of deporting her any time it deems necessary. Thus it means something to receive charity and sympathy—to turn this exposure into a net-gain positive since it began so tragically. The truth of the matter, however, is that no one stays innocent by playing both sides. Taking assistance from a fellow gymnast with the “community’s wellbeing” at-heart (Viktor Zavadil’s Selsky) and the mayor looking for good press by propping up a “good” immigrant (Gabriela Míčová) isn’t free. And the hidden costs will surely corrupt.

Victim‘s strongest attribute is its willingness to let Irina feel every pound of figurative flesh taken. This film wants us to know that she isn’t sleeping at night—both because of the abuse thrown her way (you can’t align yourself with white supremacists, knowingly or not, without becoming the enemy of those harmed by them) and guilt for the pain innocents are suffering after her silence. Anyone who quickly says they would have done the opposite are lying, though. Telling the truth risks everything she’s built. So she’ll do what she can up to, but not including, hanging herself. It’s what most of us would, too. Ride the storm and hope all parties survive unscathed despite that ship having already sailed long ago.

Victim screened as part of the Toronto International Film Festival.