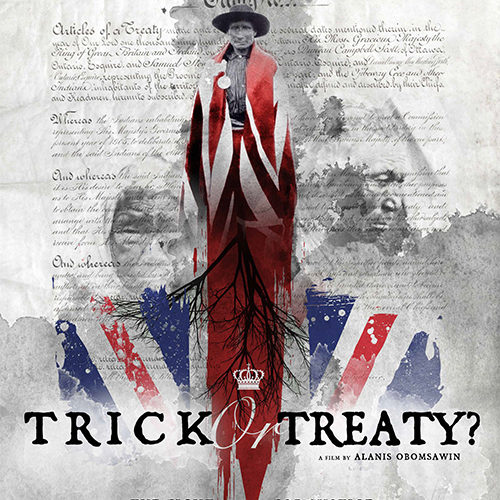 A constant fixture with the National Film Board of Canada, director Alanis Obomsawin‘s latest documentary spans a variety of themes surrounding the weighted subject of the James Bay Treaty No. 9. Signed in 1905 by the Cree and Ojibway people, their First Nation descendants have long held it to merely be the physical embodiment of their agreement with the Canadian government to share land and resources because that’s how it was explained. On the cusp of two new bills being introduced in 2012, however, any remnant of such belief has officially become moot. Modifications to the Fisheries Act, Indian Act, and Navigation Protection Act have been proposed without the consent of the First Nations and they are no longer going to simply sit back and watch their culture be destroyed. Thus the Idle No More movement was born. Attawapiskat Cree Chief Theresa Spence commenced a hunger strike seeking a sit-down with Prime Minister Stephen Harper and Governor General of Canada David Johnston to discuss Bills C-38 and C-45. Even sixteen-year old David Kawapit decided to rise to the challenge and make a statement by walking 1,600 kilometers from Whapmagoostui in Northern Ontario to the capital in Ottawa. The First Nations people are taking matters into their own hands to ensure that the Canadian citizens understand what is happening. The government can no longer bury clauses in dense rhetoric or make unilateral moves without expecting any push back. And for a population stated to be over fifty percent under the age of twenty-five, the time is now for their youth to mobilize as one.

Just as much a document of the original treaty’s history—the title Trick or Treaty? begs the question of whether the Cree were lied to in order to acquire the necessary signatures to steal their land—Obomsawin is also putting faces to the voices of this new movement for equal rights. No, not even equal rights. They simply want to live as they were originally told they could. They were promised no harm would come to the land, that they could freely hunt and trap as long as “the sun still shone in the sky”, and that they would be protected by the government in return for their cohabitation. If one reads the treaty itself, however, none of this is the case. Instead there lies clauses setting forth the opportunity to take it all on a whim and leave the First Nation Indians with nothing. Thanks to the likes of Dr. Stan Louttit and Dr. John Long, new evidence has been discovered in the diaries of Commissioner Stewart MacMartin and other Canadian men present in 1905 describing what the Cree ancestors have been saying all along. It appears the indigenous population was purposefully duped through bad explanation and blatant lies. They were even given money under the auspices of British crown generosity when really it was unsatisfactory “payment” for their home. Unfortunately, the legal document only translated in full to the tribes that signed twenty-five years later is what’s binding. Will a government ever concede ground to speculative oral agreements when a written one benefitting them is present? Highly doubtful. But that doesn’t mean the victims cannot fight to earn a voice in the legislative process trying to eradicate their way of living.

The footage Obomsawin uses to tell this story from the First Nations point-of-view is not the best quality considering a lot comes from digital cameras on the ground. You shouldn’t be too put out, however, since the content of what those onscreen are saying is what’s truly important. We move from podiums and speeches to Dr. Long’s classroom where he tries to explain the two versions of the treaty. From there we go to lecture halls with Dr. Louttit, assemblies invoking the sacrifice of Chief Spence, and the rousing collection of teenagers willing to stand up for their history rather than assimilate and leave it all behind. Trick or Treaty? is therefore as much a political statement as it is a social one so those ignorant to the facts can find a common ground beyond the laws. The simple fact that we see hundreds upon thousands of First Nations people uniting in front of the country’s capital shows a changing of the guard from silently accepting their fate to embracing the challenge being heard provides. We hear from the mouths of those on the ground about how things are changing—even where it concerns the relationship with police officers tasked with keeping protestors in check. Whereas guns were pointed down at them from high only three years previously, they now move freely as long as their movements are non-violent. Whether or not Harper and the Canadian government will listen still remains to be seen, but you have to believe the Canadian public is. And as they learn to see this issue as one worth taking to heart, the next round of candidates surely will too.

Trick or Treaty? is playing TIFF as part of the Masters program. See our complete coverage below.