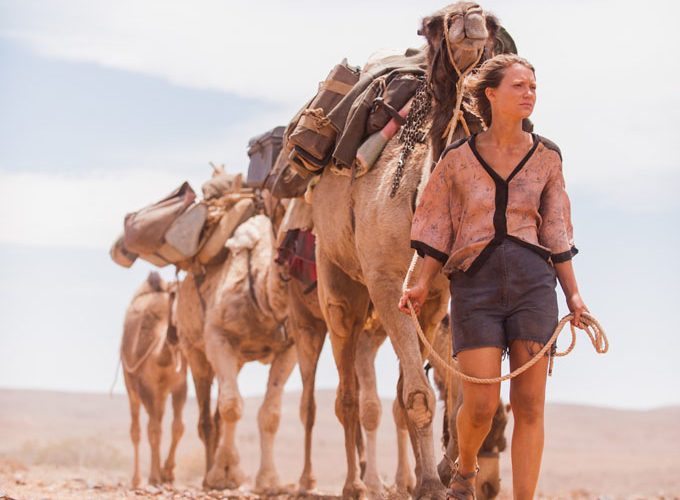 A stunningly beautiful film, director John Curran‘s Tracks traces the physical and psychological 1,700-mile trek of Robyn Davidson (Mia Wasikowska) from the central Australian town of Alice Springs to the Indian Ocean. As masterfully shot by Mandy Walker, the film has images that, at times, are lucid, while its structure and Curran’s direction takes little risks. Inspired by an award-winning 1980 account (expanded from a National Geographic article published in 1979), Tracks allows us to share a journey that shaped Robyn, an awkward young woman who survived in Alice Springs doing odd jobs in exchange for a camel. One evening she meets up with old friends and, during that time, is introduced to Rick Smolan (Adam Driver), a freelance photographer. The plans to travel are initially delayed when her camel, Zeleika, is discovered to be pregnant. After one psychedelic evening, Rick suggests Robyn seek sponsorship for her journey from a magazine; National Geographic agrees, sending Rick to accompany her from time to time as a photographer. Robyn sets out to prove “an ordinary person is capable of anything,” as she battles the extremes, including the segregation of lands — and, to that end, this is an Australian film about the nation’s past, a disclaimer for aboriginal viewers included.

Curran’s direction is straightforward, perhaps a little too much so for this writer’s taste; while the Alejandro Jodorowsky touch would be wrong for Robyn Davidson’s story, the psychological elements Curran presents are calling out for something more. Wasikowska is excellent as Davidson, a role requiring a physical transformation which she handles with rough and rugged independence. The true-to-life portrait film explores some of her flaws, including an occasional refusal to accept help — a gun from her employer, first, and water from Rick later on. The physical consequences of the trip are abundantly clear, with several sequences of Wasikowska looking tan, disheveled, and a little like present-day Amanda Bynes. The psychological consequences are a little less apparent, however. Road movies are frequently about the journey, but this one is, in essence, about the preparation, and one curiously missing its third act. How does one bounce back from such a trip? Has she been at all psychologically altered? What does life look like after one spends nine months alone in the outback?

Curran and screenwriter Marion Nelson have curiously, frustratingly left out a key element, such as the fact that Davidson later become involved in the Aboriginal Land Rights movement. The film leads unanswered questions that I wish were answered. The long-deserved triumph is present, but what comes after the journey? Perhaps Davidson prefers that remain private.

Tracks is currently screening at TIFF and has been acquired by The Weinstein Company. Check out our complete coverage below.