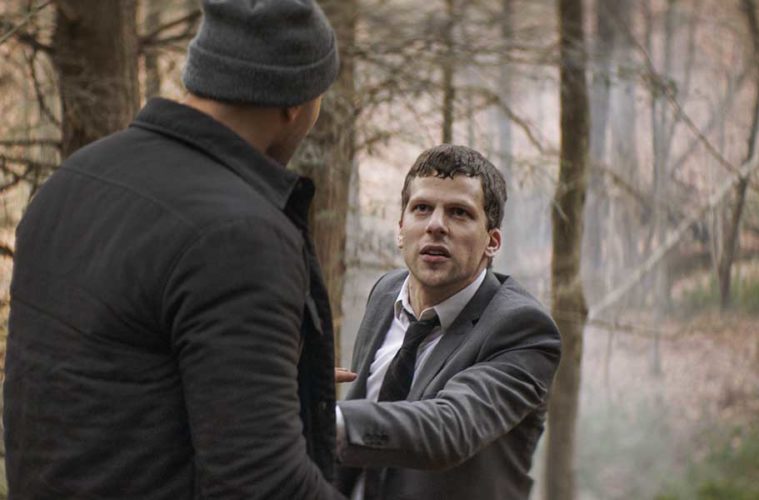 TIFF Review: ‘The Hummingbird Project’ is a Bizarre Meditation on Late Capitalism

Kim Nguyen’s The Hummingbird Project depicts a strange bromance between cousins Vincent (Jesse Eisenberg) and Anton (Alexander Skarsgård) who take it upon themselves to build a tunnel from Kansas to New Jersey to run a long micro-fiber cable, just so micro-trading stakeholders can save a few milliseconds in the bidding process and thereby earn a lot of money. The logistics to that are explained tertiarily but are too dry for anyone to really comprehend. From the very beginning, the audience is watching a Herculean task being undertaken without fully grasping the consequences. So much is being done to shave a few milliseconds off a process. It is both unfamiliar and bizarre.

While Anton does all the coding to ensure the success of this project, Vincent is responsible for the cash flow and general management. Skarsgård, with a paunch and a bald patch, plays Anton and his social anxiety to perfection. He doesn’t really want any of the fame or the money that this project promises to bring him; just a “country house on top of a hill, with a small road and hummingbirds.” Eisenberg is back to playing a character he plays best: someone with a big, revolutionary idea, who is trying to attract buyers for that idea. Growing up helping his plumber father, he had once passed out on the job and while he recovered, he could only hear his father’s faint voice saying, “Don’t let go of the line.” Putting their collective love for hummingbirds and lines together, is my best attempt at explaining the nomenclature of the film, as they go around trying to build this tunnel.

The whole project is made up of smaller individual projects assigned to different contractors, with the drilling expert Mark Vega (the excellent Michael Mando) as the principal coordinator. As the project’s expenses expand beyond control, with helicopters that cost $100,000 and giant drills that hammer through the Appalachian mountains, things start going out of control. As Anton, cooped up in his hotel room, codes away to shave off more milliseconds, and Vincent stays afloat a sea of unexpected expenses, their super competitive former boss, Eva Torres (Salma Hayek) successfully launches a project that transmits stock market data in very little time, something that even Anton’s genius coding skills can’t attain. To add to things going wrong, Vincent falls so grievously ill that even the tanking of the Hummingbird Project doesn’t seem calamitous enough.

The film is largely a meditation on late capitalism and the pressure it puts on people to get mindlessly rich. As Vincent struggles to even remain alive, he uproots forest, drills through rocks, disturbs every ecological balance in sight, and doesn’t think twice before unscrupulously trespassing on people’s property. The project is meant to be his swan song; the one thing he will do before he dies to leave behind a legacy to be proud of. Of course, there is an anti-climax.

The tunnel project is a rather nihilistic one at the end of which no one finds happiness and only the hyper-greedy win. The audience never really understand the gravity of the massive project because clearly it does not serve a purpose that makes people’s lives better. When the project finally manages to achieve the numbers it had set out to achieve, it is obsolete and one is left wondering at the massive waste of time, energy, and money the film centers itself around. The quick descent from the optimism of the beginning to the sad hopelessness of the end is a little disjointed and while one does feel bad for the protagonists by the finale, there is also an acknowledgment of the fact that this is all karma doing its thing.

The Hummingbird Project premiered at the Toronto International Film Festival and opens on March 15.