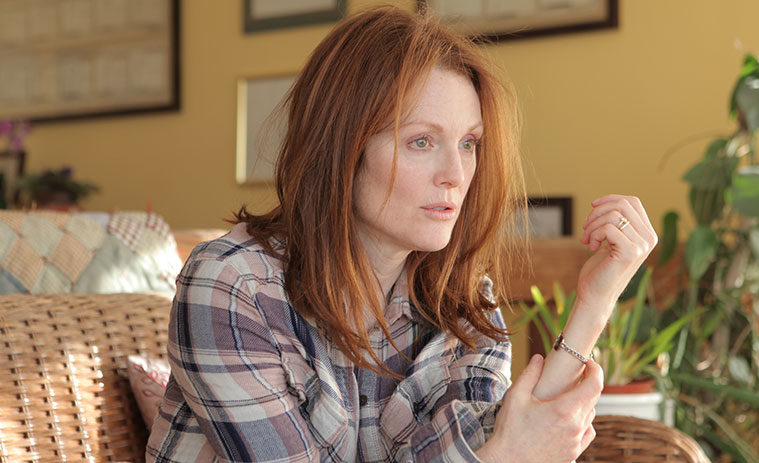 What Still Alice posits on the most basic level about its title character’s decline is profoundly counterintuitive. Highly intelligent people, Alice’s doctor suggests, are naturally more adept at hiding the effects of early-onset Alzheimer’s with mnemonic devices than people of average intelligence, and therefore undergo mental decline far more rapidly. This counterintuitive sense extends to the film itself, which values outward grace over traceable decline. As the disease progresses, filmmakers Richard Glatzer and Wash Westmore refuse to upend that grace—it merely changes shape.

While Julianne Moore and Kristen Stewart have received acclaim for their performances in Maps to the Stars and Clouds of Sils Maria, respectively, this year, I don’t hesitate to say that both actresses best their prior work here. As Alice, Moore is the picture of placidity, preserving her dignity before, during, and after the worst to come. In an amazing, lengthy close-up, Alice responds, largely correctly, to prompts from a neurologist, makes one mistake, and continues to respond, unfazed. She performs memory exercises in the midst of everyday life, and their performance does not correlate with escalation of the disease, or any communication with her family members. They arise simply from Alice being herself, independently from the disease she anticipates. But Glatzer and Westmore don’t make her a martyr: aside from deep intelligence, Alice shows desperation, childishness, and her first confession to husband John (Alec Baldwin) crystallizes the unspoken in the form of one violent paroxysm. It is a stunningly intense scene, rendering marital tensions and the pressures of Alzheimer’s inseparable. Stewart, as Alice’s daughter Lydia, is just as impressive. Lydia is a repertory actress; Alice, an academic and linguistics expert, is disapproving. But the battles of will that ensue are deliciously nuanced and authentic: Lydia is all too prone to overasserting herself, then biting her words; and Alice, unwilling to sacrifice a sense of clarity, still kowtows to her daughter’s aggression. Stewart, so often mocked as a purveyor of one-note glumness, is quite deft here at offhand line readings and quick changes in register. Her Lydia is loving, but a little callous—one doesn’t cancel out the other. When she repeatedly tells Alice, “You will, mom,” over the course of a Skype call, these are not reassurances she struggles to vocalize—they are second-nature displays of tact. When emotion breaks through the tact, it is roughly comparable to watching Alice’s decline: Lydia operates with such control-freak precision that even a small gesture of humility is deeply moving.

Still Alice doesn’t entirely transcend its disease-of-the-week trappings. One breakdown plays as overemphatic, and Ilan Eshkeri‘s musical score strains for emotion when doing so is entirely unnecessary. But the movie matches its subject with a beautifully appropriate intelligence, and is smartly structured, switching perspectives from Alice’s self-preservation to her family members’ dealings so imperceptibly that a decisive moment never arrives. Viewers are left to arrive at their own version of catharsis, but they are far from helpless.

Still Alice premiered at TIFF and will be released later this year by Sony Pictures Classics. See our complete coverage below.