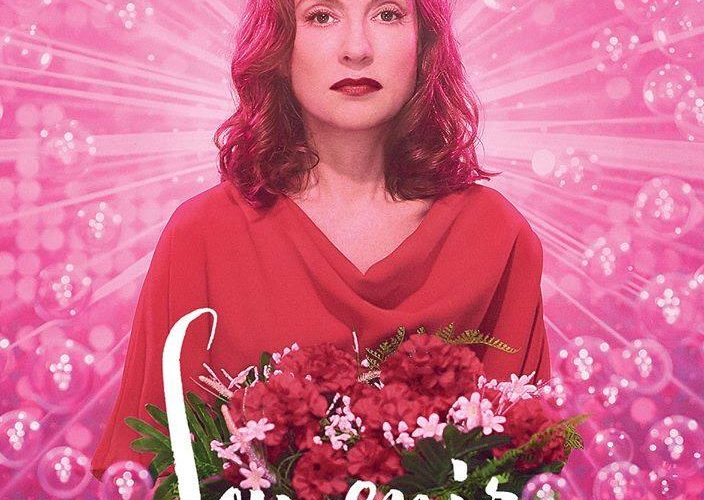 It starts with bubbles. So many bubbles rising slowly in liquid as the opening credits in script font flash onscreen. And when the camera finally pans out to see what it’s been that’s mesmerized us so? A glass of water with an Alkaseltzer dropped in, of course. This is the humor director Bavo Defurne and his co-writers Jacques Boon and Yves Verbraeken infuse throughout their outside-the-box romance Souvenir. As it is the woman about to drink this concoction is hardly special: she lives alone, watches trivia game shows, and works at a pâté factory garnishing one pan after the next in blissful monotony and anonymity. Today is the day that all stops.

Liliane (Isabelle Huppert) has a secret no one has yet caught onto until a twenty-two year old boxer begins working at her job. Jean (Kévin Azaïs) recognizes her from somewhere, but it takes a couple days for the truth to register–and even then she denies it. You see, years ago there was a European Singer Competition in which a Frenchwoman came a whisker away from the top prize before a group of Swedes stole it away. She went by the name Laura and her famed tune was “Souvenir.” Like many minor celebrities, however, fame made way to a drinking problem and broken marriage. Unfortunately for her the latter was with her manager/composer Tony (Johan Leysen). Her career was done.

Only Jean makes the connection, telling her his father was always in love with her and his mother hated her for it–more of that subtle yet effective humor similar like bubbles. One thing leads to another and the pronounced heir apparent to the light featherweight belt is cajoling Liliane into donning the Laura persona one more time for a benefit his family puts on. The press get wind, anonymity disappears, and a whirlwind romance commences between she and the much younger Jean. You can just imagine what his mother thinks of her now. It’s also not everyday a father looks upon his son as a hero or a city at a hasbeen with the fervor necessary for an unlikely rebirth.

It sounds cute and it is. Puppy love ensues, old habits return, and the tumultuousness of being caught in the moment of fame risks destroying this amazing second chance at romance and artistic success. Everything progresses pretty much as you’d expect it to and both Huppert and Azaïs buy into their affair with a sweetness to stand the test of time as long as bitterness and spite don’t seep in the cracks. But that’s all Souvenir ends up being: cute. It’s whimsical enough to laugh every once in awhile and charming enough to invest in the character development if only to see the reactions of those caught on the periphery. The darkness alluded to, however, is nothing more than innocuous detail to forget as soon as it’s introduced.

There’s room to really delve into Liliane’s psyche and figure out what happened beyond the abbreviated “Behind the Music”-ready explanation that feels practiced and routine. I found it a missed opportunity not to because the why of her becoming a pâté decorator is infinitely more interesting than her comeback to the stage. What we receive instead are relationship issues augmented in their insanely-fast development. Liliane is bouncing around so quickly that the frustration and anger bred feels as though it arrives from nowhere. It reminded me of the blown-out-of-proportion drama you’d see in a high school romance. The inevitable rift is formed from jealousy, ego, and immaturity. Perhaps her early fame stunted her growth?

If this is ultimately the message, that a sixty-year old can have the same maturity level as a twenty-year old who still lives at home with his parents, the film might be slighter than I originally thought. There are times when Azaïs’ Jean isn’t afraid to put his foot down in a way that doesn’t play as tantrum, but looking back I do remember myriad scenes of awkwardness where he leaves his coat on in her apartment and she flirts without receiving a response. Maybe it is merely two young souls falling in love with all the insecurities and optimistic fantasies of happily-ever-afters wherein the age-gap can’t help but give them pause. Is it worth it? Can it work? Is it worth finding out?

With some nice feel-good moments and a couple crippling defeats, Defurne allows his characters to evolve despite the abbreviated run-time of 90 minutes. So while the relationship is half-baked to a point–hormones running wild–both Liliane and Jean are three-dimensional. We empathize with each misstep, their quick-tempered rejection of the other rapidly replaced by coy looks of forgiveness. And we appreciate their undying support for the other’s dreams even when they have given up hope in themselves. The songs are catchy, the romance sweetly intense, and the lack of meaty drama an intentional maneuver to keep things light. As a distraction from life’s inherent drama, you could do a lot worse.

Souvenir played at the Toronto International Film Festival and opens on March 2, 2018.