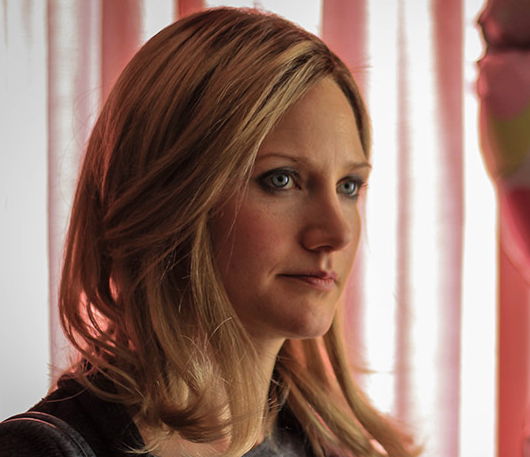 Part Todd Solondz, John Waters, Nicole Holofcener, and Bridesmaids, the bitter and cynical Preggoland is a unique comedy. Despite occasionally edging towards running out of steam (it gets a lot of mileage out of its plot), this is the rare film that approximates the feeling of a hangover. With a darker palette, matching the sadness and bleak comedy at its core, this is fitting since our heroine, Ruth (played by the film’s writer Sonja Bennett) is often in this hung over state. Living in her father’s basement, Ruth is 35 and for the past 20 years has worked at the check-out of local market. She hasn’t changed much in that time; having yet to arrive at the stage of life coined “emerging adulthood,” she instead divides her time between her market co-workers and her childhood friends which have now grown into suburban mommy clichés. Discovering the mileage that a fake pregnancy gets her, Ruth saves herself from the wrath of her new company man boss Danny (Paul Campbell) by blaming an after hours party at the store on her pregnancy. Setting the plot into motion, Ruth keeps up the ruse, sometimes with the assistance of the market janitor Pedro (Danny Trejo), formerly a doctor in his “native country.” Also helpful is Dr. Ted (Jared Keeso), a handsome customer of Ruth’s who becomes the fictional baby-daddy, even if he doesn’t know it.

What the film knows best is the relationships between Ruth and her friends as they remain supportive even if Ruth is still a kind of black sheep. The family dynamics are also funny and insightful; while Hillary has a successful (if not bland) husband and career prospects, Ruth, the trouble maker, connects best with her father, Walter. Caan is warm and excellent as an ex-cop who serves as a pillar in the community, at least amongst Ruth’s childhood friends.

Preggoland is a comedy that smartly doesn’t put all of its eggs in the farce basket. Directed with a keen sense of atmosphere reflecting some of the grit of his first feature, the dark drama Twist, director Jacob Tierney is strictly not playing this for laughs. While certain scenarios edge towards farce, including a “3D ultrasound” and more traditional romantic comedy elements, these seem a bit out of place juxtaposed against a painfully realistic character study of a women on the verge of a nervous breakdown.

The mix of broad and nuanced is quite effective when it works but when it edges towards the former, the less Preggoland succeeds; if only it had remained in its (dis)comfort zone. Writer and lead Bennett (best known to TIFF audiences for the Canadian hit Young People Fucking, a hot ticket 8 years ago) hasn’t crafted a revolutionary romantic comedy, but its certainly a good one with a unique and complex take on ambition-deficient women of a certain age.

Preggoland premiered at TIFF. See our complete coverage below.