TIFF Review: Night of the Kings Explores Strife in Ivory Coast with a Magical Touch 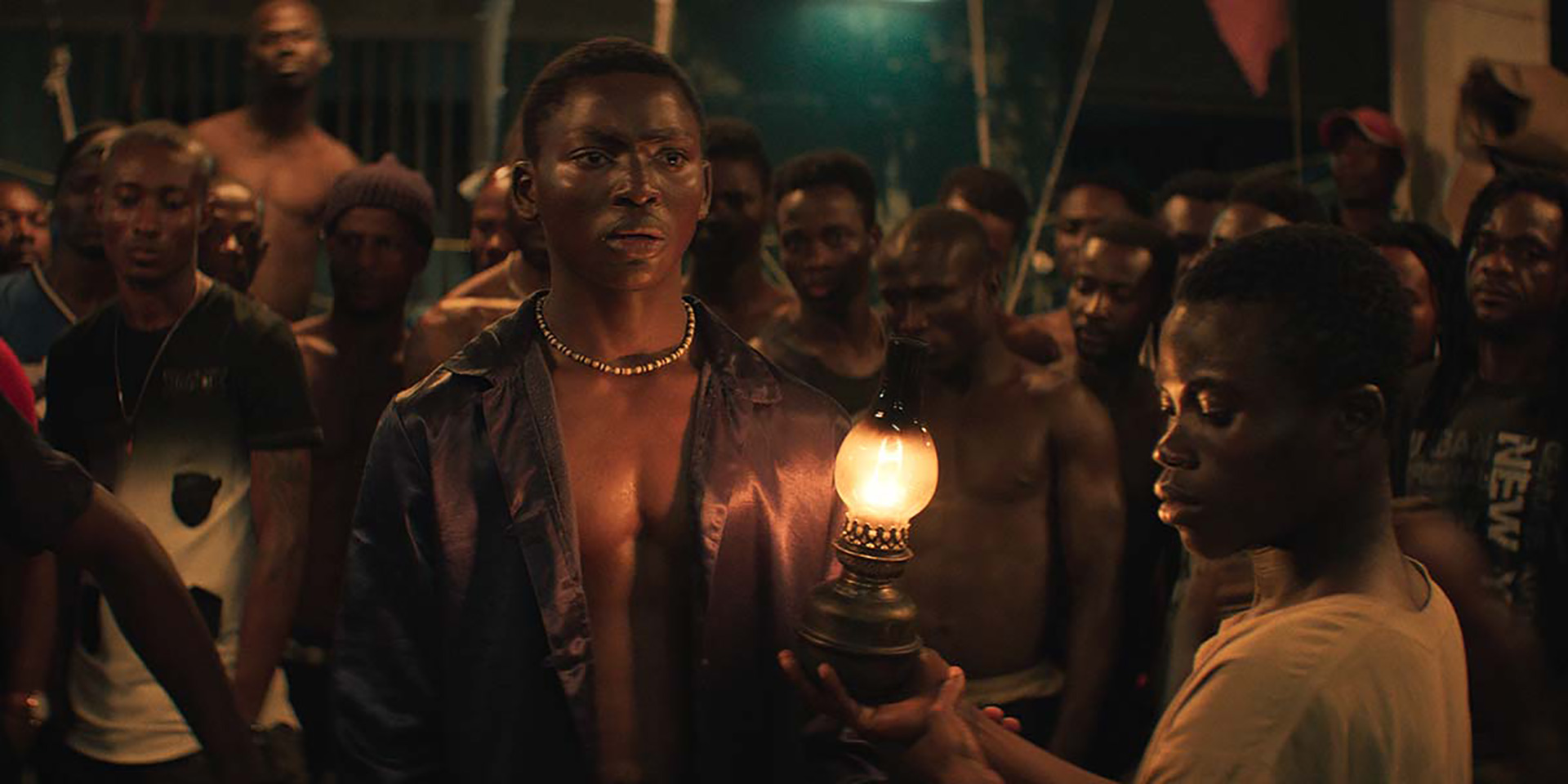 Writer/director Philippe Lacôte looks to tell a tale of the Ivory Coast and its most recent two decades of civil war and strife with his latest film Night of the Kings. With that also comes a necessity to speak about the youth who’ve recently taken up residence within the confines of his setting: La MACA. This prison—whose under-thirty population is currently hovering around eighty percent—shifts between the horrors of its inherent violence and the magical fantasy conjured when Lacôte was a boy visiting his mother (a political prisoner) in its open courtyard traversed by inmates, guards, and outsiders alike. He thought then that it reminded him of a kingdom. To a child its social ladder would seem more fairy tale than feudal.

He therefore creates MACA as a world unto itself—an easy concept considering it was built in the middle of a forest and thus isolated from its surroundings. At the top of the ladder sits Blackbeard (Steve Tientcheu) with the title of Dangôro declaring him supreme master of this ecosystem. Guards like Nivaquine (Issaka Sawadogo) exist more as ferrymen without power. They stay along the perimeter, bring in new inmates, and await instructions. All this can change today, though. Blackbeard is sick and laws state that any Dangôro unfit to rule must name a successor and take his own life. He’s relented so far because doing so would cause chaos as warring gangs (led by Digbeu Jean Cyrille’s Half-Mad and Abdoul Karim Konaté’s Lass) vie for control.

Postponing the inevitable has unsurprisingly made the prisoners restless. Unlike Half-Mad and Lass, however, those at the bottom of the food chain remain loyal. So before civil war breaks out inside as it has waged outside, Blackbeard tries once more to buy time thanks to a blood moon designating the coming of a “Night of Roman.” He will choose a storyteller to weave whatever tale his unsuspecting selection desires. Everyone will gather round this new Roman with rapt attention, cheering and jeering as others transform the courtyard into an impromptu Greek theater with dancers and singers accompanying the words and acting out their intent. While many inmates know that the Roman will be killed as a sacrifice to the moon upon completion, newcomers surely do not.

This is why a young member of the Microbe gang (Bakary Koné) becomes Blackbeard’s Roman the second he steps through the gate. An old “half-cracked” criminal with a chicken on his shoulder (Denis Lavant’s Silence) tries to warn him, but blood is already in the air. If not for appeasing that lust with the drama that only a West African traveling poet known as a griot could muster, Blackbeard might have gotten his distraction off without a hitch. The longer Roman expands upon the day of his arrest alongside the infamous Zama King into a grand myth spanning ancient battles and contemporary coups, however, the greater opportunity Lass and Half-Mad have to make their moves. With Nivaquine watching from his office, all hell is about to break loose.

Lacôte seamlessly moves from the theatricality of men letting the emotion of the moment overtake them to flashbacks of a Queen (Laetitia Ky) and her blind wizard Soni (Rasmané Ouédraogo). Silence grins in the background and Blackbeard peers on with his oxygen mask while Roman grows more confident in merging fact and fiction to keep his audience’s attention away from the nearing sunrise. Lacôte includes allegorical metaphor for what’s happened to the Ivory Coast, the childlike fantasy of a modern-day Scheherazade, and the machismo of violent men looking for a release whether through a “Night of Roman,” the fall of a Dangôro, the impending bloodshed of gang war, or a wildcard gun blast from an another. In the end, we can only hope that Roman is spared.

Koné earns that hope thanks to a vulnerability the other hardened criminals on-screen don’t possess. It helps that we don’t really know why he’s here. His fear is authentic and his stunned silence when confronted by Nivaquine’s accusations makes us wonder about the path that fate wrought. Maybe his story is steeped in truth in that way. Maybe he ran with Zama and the Microbes, but didn’t do anything more than pickpocket while they slaughtered people in the streets. Or perhaps it’s all a ruse and Blackbeard was correct when saying the boy looked as though he needed to be condemned. Heck, maybe Silence was actually his father in disguise to turn poetic words into impossible reality. And to think that it all happens in a single night.

The film most likely work better for those with knowledge of the Ivory Coast and its tumultuous twenty-first century history, but that doesn’t mean those like me who are ignorant to that strife outside of what Lacôte and Roman provide can’t still enjoy the magic on display. I got goosebumps whenever the men around Koné leapt into action to pantomime his words and break into song. It’s an electric experience I honestly think could have sustained the entire runtime without traveling back to watch a seven-year-old Zama walk the beaches with Soni and their Queen. The juxtaposition of that artistry with the violent certainties forever lingering on the horizon creates a captivating forum of endless potential as we await a new Dangôro’s crowning.

Night of the Kings screened at the Toronto International Film Festival.