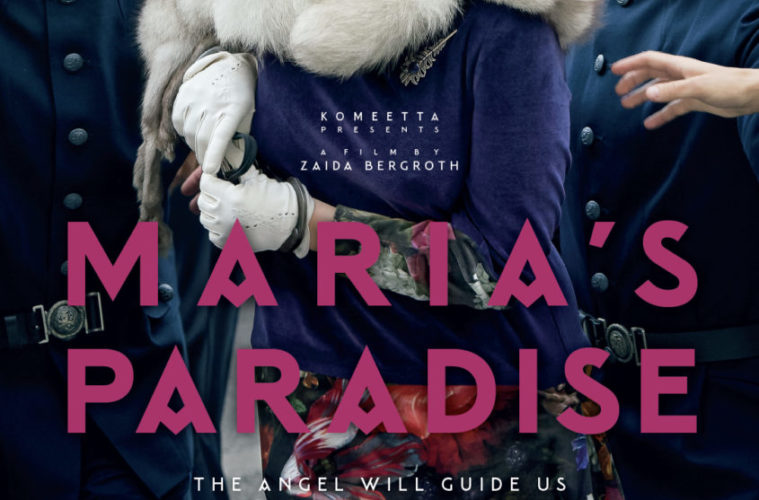 At twelve years old, Maria Åkerblom heard the voice of an angel. It came in a dream and she spoke its words to those around her as though in a trance. She became a traveling sensation as soon as the pious caught on, going city to city to tell God-fearing Finnish people that salvation was real. Eventually she grew into an adult with a flock of believers in tow—each devout “child” selling his/her possessions to donate their earnings to the cause. The sect became more and more insulated until abuse ran rampant and crimes led back to their door. And through it all she held tightly to her truth with many never wavering in their fealty. Their purpose relied on Maria’s sanity, so to them she was. While director Zaida Bergroth’s Maria’s Paradise is quick to admit the events created by screenwriters Jan Forsström and Anna Viitala aren’t “real,” Maria Åkerblom (Pihla Viitala) was. A charismatic leader preying on orphans with hope and home, she and Eino Vartiovaara (Tommi Korpela)—their relationship confused due to a signed document confirming her virginity—built a community of malleable souls willing to do whatever they asked of them. Just because she wasn’t the one pulling any triggers, however, didn’t mean the police weren’t still looking for any excuse to put her in chains and free those brainwashed followers from her manipulations. When people like Salome (Satu Tuuli Karhu) believe themselves indebted to her for their very lives, however, truth as a concept is rendered moot.

It doesn’t matter that her victims laid out everything she did to them. They were liars to the movement. All anyone on the inside needed to hear was a declaration of innocence from Maria’s lips and they would follow her to Hell and back if it meant securing a place in her caravan to the Promised Land of Israel. Everything they did was in service to her and any punishment inflicted upon them by someone in her leadership circle was deserved. So when something bad happens shortly after Salome chooses to secretly help an outsider (Saga Sarkola’s beaten street urchin Malin) convalescing within the borders of their compound, her initial thought is that God was punishing them for her transgression. Rather than charity, He desires devotion to self-preservation. Just as she begins ascending Maria’s inner sanctum of trust, Salome befriends someone from outside the psychological walls of her influence for the first time. She does remain as steadfast as can be, though, even if Malin’s predicament leads her to bend a few rules for compassion’s sake. The latter is more than obliged to let the former preach about God despite seeing through Maria’s ruse before meeting her because she needs a steady supply of food and shelter until she can get back on her feet. Malin is a survivor and will even join the flock to remain one. Eventually, however, she can’t simply sit back and let Salome believe the lies. Once tensions rise and evidence mounts, Maria’s favorite orphan will have to make a choice.

Bergroth’s film wants us to see how much power Maria holds over these at-risk youths and how they’re compartmentalized within the community so they can’t truly know what’s going on behind the scenes. Everything that looks bad is spun as a positive and those who are severely punished become too scared to endanger their wellbeing again. If there’s a woman (Satu Mikkelinen) locked in a room that Salome must bring food to each day, she’s explained away as a patient instead of prisoner. If someone with influence in the outside world is putting pressure on Maria and her cohorts, she’ll let the “angel” condone violent retribution via trance so no one can question their complicity as anything but divine. It’s hard not to see the parallels to today. Look at the current state of the GOP in America with their de facto leader spouting nonsense deemed genius by members of the cult and lunatic ravings by those with the clarity and distance to acknowledge the truth. It doesn’t matter how much physical evidence there is documenting the president’s lies, a sycophant like FoxNews host Stuart Varney will still go on live television and say Trump has never said anything but truth. When the lie is all you know—like it is with Salome—escaping its grip can appear impossible. Sadly it’s often only through personal tragedy that the façade can be shattered. Only when the pain of loss prevents the lie from solidifying over what you now know is true does the house of cards fall.

This isn’t some overnight revelation, though. Forsström and Viitala’s script ensures the seeds of doubt are sowed gradually so they can be dismissed in the moment and yet cemented into the recesses of Salome’s mind. Karhu’s performance allows this fact to be known as her skepticism and intelligence always engages before her loyalty to Maria can subdue those impulses. To watch her let the scars of love wash away what logic has deemed irrefutable is heartbreaking because it reveals exactly how damaged she’s become. When a tenuous and conditional security overtakes undeniable truth, you’ve transformed into cannon fodder for the person pulling your strings. If Salome is able to find pure love removed from obligation (platonic or otherwise), she can reclaim the agency she never knew she’d lost.