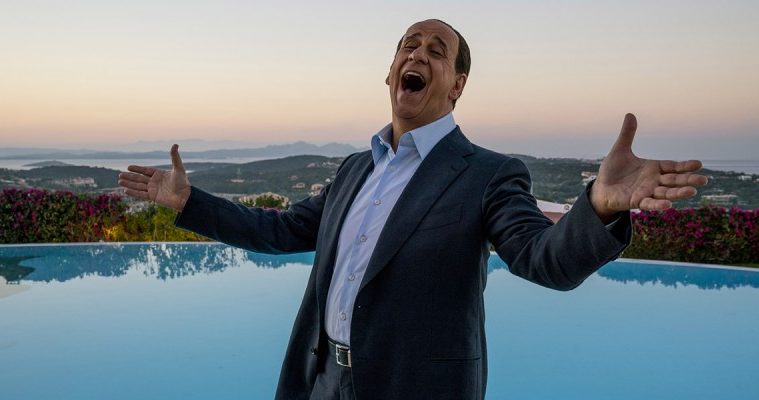 TIFF Review: ‘Loro’ is a Wild Ride into the Exploits of Silvio Berlusconi

If you watch “Last Week Tonight with John Oliver” you know Silvio Berlusconi. The Italian tycoon-turned-politician is mired in scandals, controversy, and populist excitement to the point of having a bizarre theme song declaring, “Thank Goodness for Silvio.” He smiles and waves, refuses to divest business interests while in office, and worked to enact laws that helped he and his friends become wealthier while also staying out of jail (mostly). It’s no surprise then that many say he set the precedent for the political chaos Donald Trump rode to the White House. They both accrued a fortune off an insane loan no regular Joe could ever hope to receive and took their narcissistic need to be loved onto their country’s biggest stage. The difference, however, is that Berlusconi seems cool.

That opinion of course is based on nothing but Paulo Sorrentino’s epic Loro (released in two parts domestically, it has been recut into one two and a half hour film for international audiences). But if its long-winded, clearly tongue-in-cheek warning is to be heeded, everything onscreen is a lie. Since that disclaimer is for legal purposes so Berlusconi doesn’t sue the studio, however, it doesn’t mean we should give this man the benefit of the doubt. If anything I’d argue Sorrentino and co-writer Umberto Contarello do that already. Because while we don’t see him until a good third of the way through, we feel a desire to want to be his friend. It’s the sort of charisma and confidence that spawned “fake news” and bald-faced lies. We want to believe this seventy-year-old is young at heart only to discover he’s merely never grown up.

This is not the sort of man you want running your country: one who’s willing to gladhand and bribe senators into his corner before scoffing at the release of wiretaps explaining how he did it (without stopping it from working). But here we are. In a world of ubiquitous media and echo chambers promising happiness because those way above our privilege are happy (the American Dream at work to quiet dissenters and string the ignorant along), we crave this hollow example of “personal touch.” We want to believe these men speak directly to us and know our suffering despite facts exposing how it’s all a con. These are salesmen and charlatans pushing agendas to line their pockets at the expense of those they’ve duped to allow it to happen.

This is why Sorrentino begins his saga on our side of that allure. He focuses on a young hotshot named Sergio Morra (Riccardo Scarmarcio) and his desire to shake Silvio’s hand to win a government position he could then pilfer for fame. To do so is simple: create a stable of attractive women to flaunt on an estate his savings will barely cover in hopes the rich lothario notices. And with the help of Berlusconi’s prized mistress (Kasia Smutniak’s Kira), he just might win that meeting. So we watch him throw insane parties with fourth wall breaking interludes about MDMA and naked gyrating by the pool. We get a taste for “politicking” with blackmail, strong-arming, and luck before eventually leaving those carnal pleasures for the quieter home life of Silvio (Toni Servillo) and his (rightly) unhappy wife Veronica (Elena Sofia Ricci).

Here’s where the flash wanes—at least for a little while. Our introduction to Silvio in the flesh may be eccentric, but it’s also genuine in its contrition as he tries winning back the love of his life. You must remember that this isn’t something he can simply do with honesty and faithfulness considering Sergio’s women are forever looming in the background with more excitement than Veronica’s want of nature-set adventures. So we get a taste of the perpetual war within to have what he can never have: everything. The humor is subtle yet potent, this section itself much less flamboyant than its predecessor. We learn more about Silvio’s empire, his vanity, and his sad delusions relevancy (the sadder truth being that he is). Eventually the ruse of gentlemanly grace crumbles like and we see which matters most between civic duty and himself.

It’s a wild ride of many starts and stops. The first portion drives with pedal to the floor as sex, drugs, and more of both fill the frame and allude to the quid pro quos that run this scene. Sorrentino marries sound and visuals like few others, his slow pans so beautifully serene in The Great Beauty and Youth lending the writhing a memorable austerity. It’s hard not to be disappointed once Silvio arrives because the excess halts in order to show the man Loro’s opening scene metaphorically introduced as a sheep bleating at an air conditioner (think the Trump meme with Donald screaming at a kid mowing his lawn). We anticipate the hedonism to increase once Sergio and Silvio come together, not the slower—yet informative—thirty minutes that arrives first.

We ultimately need that bridge, but maybe it works better as two parts. It doesn’t help that we come to see Sergio as our main focal point only to watch him be forgotten along with Kira for behind closed doors drama of marriage and love in a fishbowl of Silvio’s own making. Thankfully things pick up in extravagance with a welcome strand of truth courtesy of the film’s best character Stella (Alice Pagani). She’s always in the background: alluring, smart, and unpretentious. She’s who Silvio wants and also who he can’t have. Their scene together is a wonderful look at what we need to combat men like him and Trump: dignity. That’s not to say the others don’t possess some too. They’ve simply become too close to let it rule.

Stella leads us to a third act steeped in reflection and context that makes it seem as though Sorrentino sympathizes with Berlusconi. Perhaps we should. His tactics were underhanded and he’s nothing if not immoral, but seeing Servillo’s smile and even-keeled refusal to be offended has us wondering if this infamous Italian figure has been unjustly judged. Or at least unjustly destroyed by our constant need to teardown with vitriol what we could more cogently critique with sound interpretation. It’s a weird sentiment for me since I only know Berlusconi the cartoon rather than the man. I instead project Trump upon him—a figure for whom sympathy should play no role.

That trepidation kept me from fully embracing the tone once the satirical explosiveness is replaced by sobering contemplation. Away from that, though, there’s little to dislike. Loro has a ton of style and effective performances across the board. The surreal absurdity manifested by the aforementioned sheep and Silvio’s trusted, stoic ally Paulo (Dario Cantarelli)—who feels like a Wes Anderson character lurking behind his shoulder—will also ensure you’re never bored. But while things move at a good pace, the diversions into politics and Silvio’s well-meaning intentions feel like exactly that. We spend so much time laughing at him that the moments asking for pity prove false. His relationship exploits and especially his failures within them are much more captivating and fully realized.

Loro screened at the Toronto International Film Festival and opens on September 20, 2019.