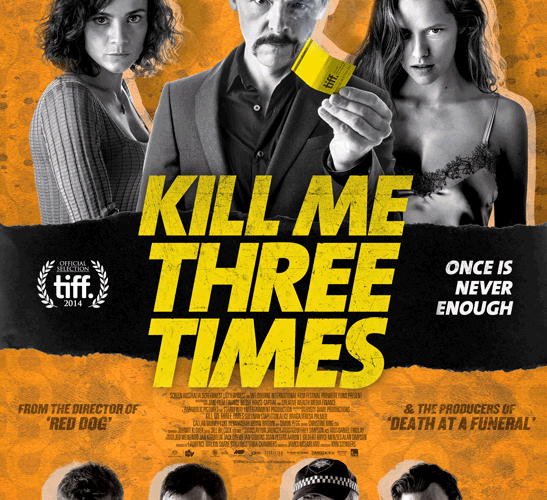 Director Kriv Stenders left the audience seated for his latest film Kill Me Three Times with the words, “I hope you have as much fun watching as we had making it.” I doubt I did, but I cannot deny it wasn’t the sort of entertaining romp that keeps you on your toes hypothesizing who—if anyone—survives. It seems such a small thing, but a movie with no fear in killing its characters is a lot more enjoyable than one forcing you to watch misfires and flesh wounds so the would-be victim can become the perpetrator later on. A few shots fired do miss their target here and the first did make me sigh as I incredulously thought, “Here’s another one.” Thankfully, however, the shooter rolls his eyes with an equal measure of frustration, retakes aim, and finishes the job.

Even though he’s listed as the “and” in the credits, Simon Pegg’s Charlie Wolfe serves as our introduction into this post-Tarantino revenge thriller. His voiceover yells amidst profanity that he can’t be dead. Not yet anyway because he “doesn’t die; he thrives.” So Stenders and first-time screenwriter James McFarland rewind a bit to the beginning—of one thread at least—to shed light on some more detail into how this stranger ended up flat on his back with eyes closed atop a bed of stone. The screen goes black, out pops the animated text reading “Kill Me Once,” and onto the screen pops an intact Wolfe taking care of a job with gun in one hand and phone in the other. Australia’s desert then fades to show a small-time dental office and the games begin.

Told with loose chronology and a calculatedly particular process of information dispersal, this first act doesn’t even tell us Wolfe’s name. He’s merely an onlooker like us, watching as Dr. Nathan Webb (Sullivan Stapleton) and his assistant/wife Lucy (Teresa Palmer) put a plan into motion that will hopefully see a patient named Alice (Alice Braga) dead in an insurance scheme. Why? Well, that doesn’t get explained either until Act Two’s aptly titled “Kill Me Twice.” It’s here we discover Alice’s husband Jack (Callan Mulvey) is also looking to murder her by proxy. You guessed it: hitman Charlie Wolfe. This means we go back even further, rewatch repeated material from different vantage points, and rejoice in the ever increasing bloodbath that ensues. McFarland has crafted an exhilarating yarn that entertains in its construction thanks to multiple surprises, allegiance changes, and a whole lot of deceit at the hands of the five people mentioned above, local mechanic Dylan (Luke Hemsworth), and police officer Bruce (Bryan Brown). Everyone has his or her reasons to throw morality out the window, each takes a run at acquiring a bag with a quarter million dollars that exchanges hands often, and they all pick today as the day they put their money where their mouth is to get stuff done and work towards the future. What’s a little homicide when enough money to retire young is there for the taking? It’s just a shame no one has the brains to ever fully wrest away control.

As a result there’s a gloriously dark comic streak succeeding in large part due to the performances that lead us around Australia on a multi-tiered quest for vengeance. There’s the fantastic sarcasm and bickering courtesy of Palmer and Stapleton, which pits her superiority complex against his lack of mettle. She’s great as the better half always picking up the slack and keeping their plan on course while he delivers a relatable everyman in stark contrast to the macho heroics as the lead of 300: Rise of an Empire. Braga and Hemsworth mostly fall onto the serious side of the spectrum and Mulvey and Brown reside in the middle due to their refusal to give an inch in dealing with those under their thumb.

Eventually they’ll all find themselves exactly where McFarland wants them and on the outside looking in will be Charlie Wolfe. Pegg is an inspired choice for the role because his is the truest villain amongst such imperfect company despite his usual good-natured self shining through with welcome bile. Utterly selfish, he has no problem painting anyone close by into a corner if for no other reason than to snidely quip something their way before pulling the trigger. He’s the professional of the group; the foreigner forced to cope with the fact everyone else bites off more than they can chew to disastrous effect. At first it’s a boon with plenty of strangers doing his job for him, but we know it won’t be long before the unsolicited luck runs out.

Kill Me Three Times may not possess anything unique to place it far above the next thriller that sneaks out from the stylistic shadows Tarantino paved, but that’s not its goal. Instead, it has fun with convention through effective pacing and character trajectories that often don’t stay where cliché and preconception guess. Everyone’s a badass—save Stapleton’s wormy gambler to a point—and none are above getting a bullet in the throat. Equal parts revenge actioner and con game, the comedy never ceases to subvert even the most gruesome death or serious dramatics. Because at the end of the day, that’s what Stenders has put onscreen. The escalating conflicts merely progress its subplots to deliver more laughs until you realize the whole thing is ultimately one big, infectious joke anyway.

Kill Me Three Times premiered at TIFF. See our complete coverage below.