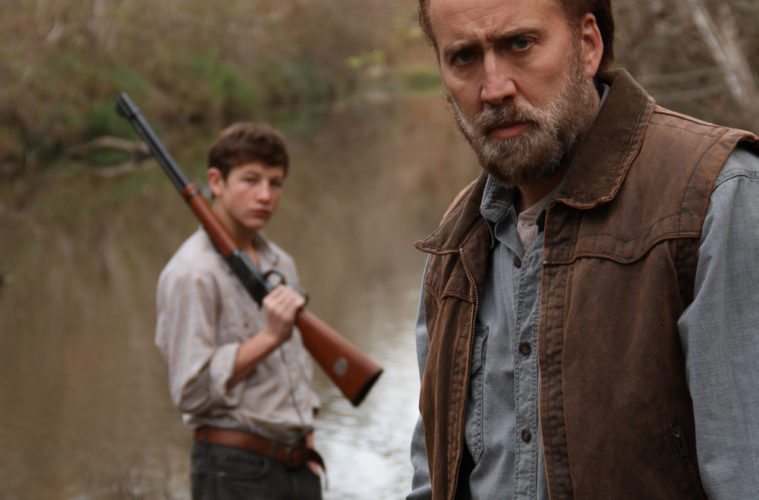 While it often feels like a brother to Jeff Nichols‘ brilliant Mud, David Gordon Green‘s newest drama Joe even has the same young actor supporting his titular lead: Tye Sheridan, who either has the greatest agent in the world or, simply, possesses the kind of ingrained encyclopedic knowledge and love for the art form that someone like Paul Thomas Anderson had at the same young age. His résumé may not contain a whole lot of diversity, what with its three country boys growing up the subject of abuse — Terrence Malick‘s The Tree of Life rounding out that trio — but he knows emotional stoicism and unwavering moral centers in a way most adult actors can’t wrap their heads around. He embodies the hardworking boy-who-could-kick-your-butt image perfectly while, too, giving us a troubled soul in desperate need of our compassion and empathy. Here, more than those other titles, Tye’s Gary is caught in an impossible place. He knows what a bastard his father (Gary Poulter) is, and that it’s up to him to care for his mother and sister, but when push comes to shove can’t bring himself to hurt the man he’s meant to idolize. Even after proving his worth with a local businessman, Joe (Nicolas Cage), the desire to put his dad on track with his own employment spot risks him losing all credibility that’s just been earned. Wade is never going to work an hour (let alone a full day) when he could troll the neighborhood for scraps and alcohol, but Gary can’t give up. Luckily for him, Joe provides, at first begrudgingly, the friend / father figure this boy needs, seemingly to right some of his own past wrongs.

Here lies the brilliance of the script, which sees Gary Hawkins‘ adapt a Larry Brown-penned novel: we’re given very little exposition regarding Joe or Gary. The film is a testament of “the now,” rewarding our patience with small morsels of information which add not-insignificant degrees of dimensionality to the characters — but not the unfolding events. Watching Cage joke with his workers before heading home for solitude — or his carefully considered decision not to step in when Wade beats Gary and takes his pay — speaks volumes no traditional, “heartfelt” sharing of emotions ever could. These men keep their thoughts close to their chests, acting only when there’s no room left. This is the breaking point of Gary unleashing his wrath on local nuisance Willie (Ronnie Gene Blevins), or Joe fearlessly taking on the police officers pulling him over like clockwork for drunk driving. There is a similar rage brewing within both that comes to overshadow the sympathetic souls underneath. Green shows this sense of kindred spirits as some sort of psychological link, complete with a few intriguingly obtuse moments that cut between both actors as though they sense one another from afar. Joe becomes the father Gary never had while he, likewise, gives the grizzled ex-con someone to care for. Joe tries to do the same with his girlfriend, Connie (Adriene Mishler), but ultimately shuts down and heads back to Merle (Sue Rock) at the local brothel. He can mentor Gary, though, letting him into a life that obviously holds more than a few similarities to the boy’s. To Joe, the act of giving Gary what he, himself, never received is the purest possible atonement for bad deeds of the past.

This mutual affection grows as Willie’s own thorn in their sides transforms into something far more poisonous. Between his unyielding insolence and Wade’s increasingly abusive nature, Joe can’t help but find a tenuously calm façade — cultivated to stay out of jail — begin to disintegrate. His checked temper rises until Sheriff Earl (Aj Wilson McPhaul) has to step in and warn a friend that he’s about out of warnings. Joe begins seeing red just as Gary gets fed up with his father’s violence towards he and his sister, Dorothy (Anna Niemtschk), the two converging into a force for vengeful hope while Willie and Wade begin making deals of their own. Green creates a dark, rundown world of broken souls defeated by life, where each stands at the brink of descending into hell with no means of return. The burgeoning relationships may be clichéd in this type of story, but each resonates when gritty portrayals form them. Sheridan was born for this starkly harsh childhood and wise-beyond-his-years demeanor, while Cage reins in his large personality to craft a man at constant war with his own temper. Less aloof than Matthew McConaughey‘s Mud, Joe stands at a distance from others for his own survival; it’s only meeting this desperate and fearless boy that shakes him awake, guided by nothing but the hope of saving Gary from a life he’s been forced to lead the past twenty or so years. Their authenticity inside this visually unflinching environment aside, though, it’s Poulter’s Wade who truly epitomizes this bleak aesthetic, the actor effortlessly melding a rough-hewn character with personal inflection and thespian instinct.

An untrained actor found on the streets by the casting director, Poulter brings dopy-deranged humor to this vicious and calculating creature sulking around the film’s heart. He is, ultimately, the man who brings Joe and Gary together, as well as the one who rips them apart when the necessity for sacrifice trumps self-preservation in an emotionally heavy climax. He becomes a sort of vile apparition always on the move, living on the outskirts of this small backwoods society like a circling hawk feigning weakness while waiting to pounce. It’s a role that got Poulter clean and sober long enough to win another movie. But it, sadly, wasn’t enough to save him from inevitable destruction, having passing on before getting the chance to see his affecting debut in full.

Joe screened at TIFF. One can see our complete coverage by clicking below.