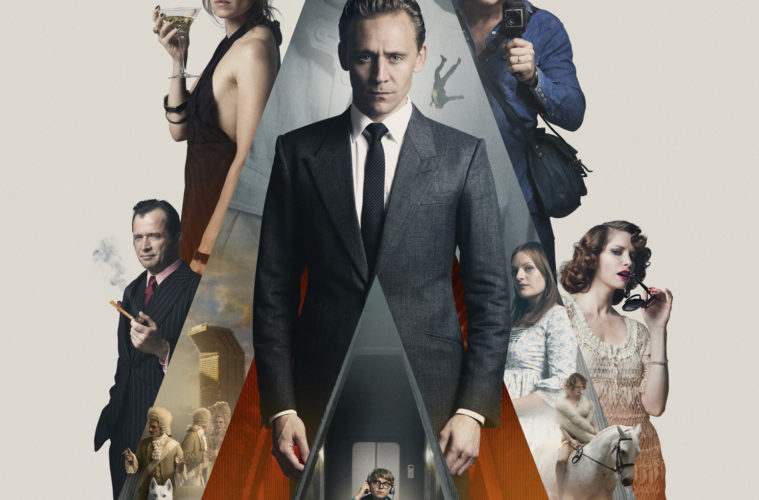 As soon as the voice of Tom Hiddleston‘s Dr. Robert Laing was heard speaking narration above his weathered and crazed visage manically moving from cluttered, dirty room to darkened feverish corner, my mind started racing. Terry Gilliam’s Fear and Loathing in Las Vegas popped into my consciousness and then his Brazil, after a quick title card shoves us back in time to watch as Laing enters his new concrete behemoth of a housing structure, oppressively standing above a vast and still parking lot. Add the clinical precision of Stanley Kubrick dolly shots and the chaotic, linear social ladder climb of Snowpiercer with a bitingly satirical wit replacing the high-octane action and you come close to describing the masterpiece that is Ben Wheatley‘s High-Rise.

I bestow that label without hyperbole, too, because while I have the utmost respect for Wheatley’s talents and vision, the two films I’ve seen of his did leave me somewhat cold. Both Kill List and A Field in England were captivatingly unique pieces of genre art that put a smile on my face for their ingenuity and brashness, but I couldn’t shake the thought I was being kept at arm’s length by both. What he’s accomplished with regular collaborator Amy Jump‘s smart adaptation of J.G. Ballard‘s 1975 novel, however, completely closes that gap. This thing is dense, wild, hilarious, timelessly prescient, and a feast for eyes and ears. I’m not sure ten viewings would be enough to even start recognizing each detail of set, characters, or plot.

The aesthetic is ’70s chic with a pinch of dystopic totalitarianism. It’s simultaneously a period piece and heightened variation of our present — or more accurately — future. Laing has chosen what’s advertised as a state-of-the-art facility in lieu of a more conventional bachelor pad in the city because he’s investing in that future, seeing an opportunity for growth in the vision set forth by the complex’s architect Anthony Royal (Jeremy Irons). Well off like each of his neighbors, Laing’s comfortable settling on the twenty-fifth floor—the number proving a sort of hierarchy demarcation. Charlotte Melville (Sienna Miller) and her son Toby (Louis Soc) are above while the Wilders (Luke Evans‘ Richard and Elisabeth Moss‘ Helen) below. And Royal, of course, has the penthouse roof to solidify his status.

Sprinkled throughout are more upper middle class souls (filmmakers, orthodontists, etc) and elite (celebrities/dilettantes), each segmented by floor and parking space proximity. The two halves have no interest in mixing, but their relationship is hardly adversarial to start. After all, no matter what their elevation is the amenities remain identical — or at least they should. Royal explains to Laing during a casual house call/ascension interview that his building is settling. Random power outages and water stoppages will be expected. It seems reasonable enough, until reality shows how it’s the lower floors being affected. Coincidence? Maybe. But why are some left in darkness while Ann Royal (Keeley Hawes), Pangbourne (James Purefoy), and Jane Sheridan (Sienna Guillory) enjoy an one-the-nose Victorian-costumed soiree?

It’s here that the downward spiral commences with Pangbourne and Royal’s devoted manservant Simmons (Dan Renton Skinner) seeking to lord superiority as Richard Wilder looks to agitate and chip away their resolve. Laing is caught in the middle, thinking himself a liaison between worlds until a side must be chosen. The war manifests as rival parties before moving towards the acquisition of property by force. Someone dies to expose the fragility of life and everyone regresses into unstable balls of emotion unchecked by cognizant thought. Sex runs rampant, verbal attacks evolve into physical, and Royal peers down with the capacity to stop everything in its tracks. Perhaps his work goes beyond brick and mortar, though. Maybe a flippant remark about social experimentation hides the truth.

Wheatley paints it all in a heightened state of subtle science fiction, the environment familiar yet ungodly in morality and simplified into segregated tiers. The whole is just left of center as the aesthetic reveals an imaginative and darkly whimsical cover of reality much like Portishead’s rendition of ABBA’s “S.O.S” playing above an epic montage of feral violence and blossoming insanity. He fearlessly shows a suicide in slow-motion to feel the impact of skull on metal; shoots a murder sequence through the fractured glass of a kaleidoscopic lens; and basks in the absurdity of the situations everyone finds themselves within that aren’t so far-fetched. It’s an overflowing abundance of stimuli, but it washes over us in waves of dry humor and sharp-tongued commentary.

The film depicts a homogenized existence turned discordant. Boxes of goods on the supermarket level (similar to the under-seen Canadian film Waydowntown‘s idea of a community built to never have to go outside again, this high-rise is self-contained) are generically rendered like every character is white, privileged, and entitled to happiness. The disparity between oppressed and oppressor is miniscule yet the maneuvers undertaken to close the gap are life threatening. It’s the world in which we live distilled within a hermetically sealed enclosure growing smaller and smaller around its inhabitants as sanity is squeezed out entirely. The ride is fast and at times obtuse, but the disintegration of their humanity arrives as a gradual loosening of sense.

You can only cage animals so long before dominance is tested. The quest for equality devolves into a jealous yearning for more and the tables turn to spotlight how the same fundamental argument has merely transferred hands. Normalcy becomes a man-made construct that no longer applies because the difference between when Laing moves in and the dust settling is monumental. So too is his persona and that of those surrounding him. Hiddleston possesses the perfect balance of wide-eyed optimism and volcanic aggression when he finally breaks. Everyone loses etiquette and empathy, each attempting to wrestle away control in a battle only the building itself can win. Progress and ambition consume them until there is no escape. The fall of civilization has begun and it will spread like a cancer.

High-Rise premiered at TIFF and opens on May 13th.