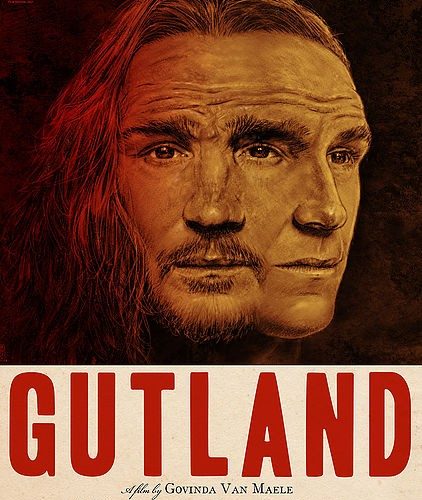 TIFF Review: ‘Gutland’ is an Atmospheric Thriller Set in a Nefarious Community

When a German drifter walks into the quaint Luxembourg village of Schandelsmillen with a scruffy beard, bag full of money, and stoically gruff attitude, we wonder what secrets his past holds. Jens Fauser (Frederick Lau) arrives with a single question: “Do you need help with the harvest?” That specific query unfortunately can’t help but make him stick out like a sore thumb further than he already does considering the harvest is half over. The townspeople therefore prove cold and cryptic, forcing him to accept work would be better found elsewhere. But as soon as that realization to move on arrives, the atmosphere abruptly shifts. Young Lucy (Vicky Krieps) invites him to her bed and old man Jos Gierens (Marco Lorenzini) takes him under wing. Suddenly he’s found home. Writer/director Govinda Van Maele’s debut narrative feature Gutland shows this in rapid fashion so we never quite acknowledge everything’s inherent strangeness. We accept the village as so sleepy that a stranger such as Jens becomes a welcome distraction and change of pace to the norm. For a young single mother like Lucy living with her parents in a bedroom still adorned by American heartthrob celebrities, he’s a mysterious “bad boy” to conquer. For someone who loves his home and the people within as much as Jos, he’s a potential friend and permanent member of their close-knit, insular community. At first they’re polite and empathetic, Jens proving a hard worker and kindred spirit embracing the provincial life presented. Eventually, however, it’s understood Schandelsmillen might hold more secrets than him.

Events unfold with an air of mystery as Van Maele wields an underlying atmosphere of suspense throughout. Jens is understandably skeptical of their kindness — tentatively cautious from his mistrust of them and paranoia stemming from whatever he did before arriving. He becomes protective of his property and emotions — always on-edge as those around him seemingly thaw overnight. But amidst the revelries, smiles, and Jos’ band (he gives Jens’ a trumpet to learn and join in despite being unable to yet read music) is a level of surveillance on their part too. It’s difficult not to wonder about ulterior motives beneath charitable compassion, but it does dissipate once comfort is achieved. This newfound kinship lulls us into a sense of security only for Van Maele to pull the rug. This transition commences with a collection of nude photos, visit from the police, and appearance of another stranger who doesn’t belong. A dark underbelly to Jens’ otherwise docile demeanor is exposed just as Jens witnesses a streak of uninhibited, aggressive sexuality and unorthodox parental punishment technique from a distance. Initially the kink makes him laugh as though the wholesome image he imagined coming from a big city was abruptly proven false. But soon his discomfort levels rise once again. Little things heard begin to add clarity to the many eccentricities seen and we gradually move towards the climax we’ve all been anticipating. Just because we knew what was coming, however, doesn’t prepare us for the filter that warps it into something much more sinister than assumed.

Van Maele does a good job ensuring to never hold our hand. We’re constantly left to our own devices as far as assuming whether some action is as innocuous as explained or as malicious as visual and aural stimuli portend. Take a scene where three harvesters we don’t really know drive Jens out to a field and explain how a dead animal must be found in the tall fields before plowing through. It’s an anxiety-riddled exchange enhanced by looks we must interpret as danger and fear. Have they brought him there to kill him? Is there really something rotting that must be retrieved? It’s a perfect distillation of how often sequences can be read two ways throughout. Who is using whom and when has everyone’s worth been drained? It’s an impossible question to answer until the very end because so much of what’s happening is driven by unknown factors. There’s a reason Jens is here and a reason the village embraces him. What was once a drama steeped in the potential for tragedy at the hands of a predatory man in an unsuspecting environment evolves into an atmospheric horror thriller about an insidiously nefarious community enveloping its unsuspecting prey. Gutland becomes both simultaneously with its ever oscillating tone from normal to abnormal. It recalls The Stepford Wives by way of David Lynch, but replaces any struggle between good and evil with evil’s unchecked prevalence. Bad men become redeemable as good people prove to be monsters. And before it’s over we’re left to wonder if two wrongs do make a right.

This duplicity is necessary for success and a credit to Van Maele’s handle on his aesthetic. There’s something about the pastoral calm of farmland hiding dark emotional secrets that excels. It’s no coincidence either that every successive shot of the fields removed of another swath of crops marks new revelations. As the harvest finishes so too do the heavy secrets. Lau’s Jens becomes more paranoid as Krieps’ Lucy becomes more comfortable, one feeding the other. As soon as the field is left barren, every psychological wall and lie by omission has disappeared. The truth leaves Jens in limbo, assumedly with a decision his very survival relies upon. More than suspense, however, Van Maele trades in surrealism. As such Jens might not have had a choice at all.