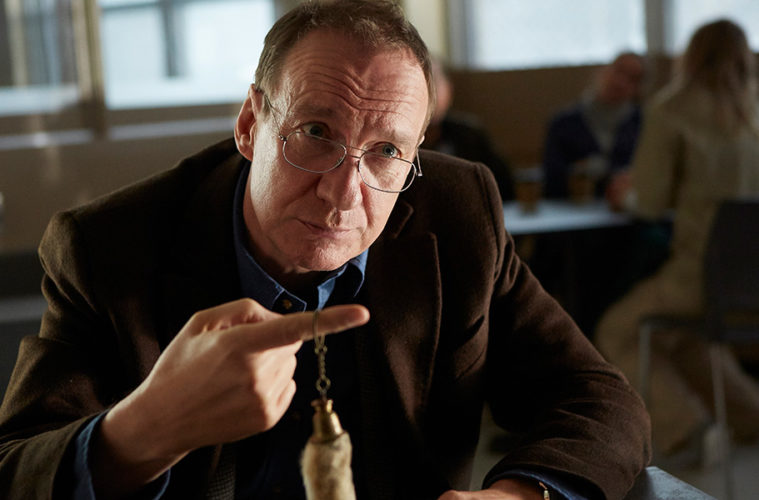 As a life-long appreciator of Atom Egoyan–trust me on this one–Guest of Honour is one of his stranger pictures veering occasionally into the territory of dark comedy. While his later works (especially Remember and Captive) have yet to reach a return to the emotional resonance of his back-to-back masterpieces Exotica and The Sweet Hererafter, his latest film is a scrappy Southern Ontario indie that actually harkens back to his earliest work that kicked off the so-called Toronto New Wave, including Next of Kin, The Adjuster, and Speaking Parts. The film itself is a mystery buried deeper than it ought to be in a confessional as Veronica (Laysla De Oliveira) sits down with Father Greg (Luke Wilson) to discuss the passing of her father Jim (David Thewlis). She notes his motivations were often very strange–as if we’d come to expect anything else in an Atom Egoyan picture.

Jim, a restaurateur turned health inspector for reasons only hinted at, finds himself using his position of power to right certain wrongs. An over-protected father of young Veronica, he has much in common with fathers of previous Egoyan pictures as she starts to blame herself for two tragic incidents that occurred when she was younger and attuning in her adult life by pleading no contest to a crime she didn’t commit. As an attractive young high school teacher, she becomes a little too close to the boys she is supervising on a field trip, much to the dismay of the bus driver accompanying them in a series of scenes that borders on the absurd.

Guest of Honour plays like a return to the greatest hits of Egoyan’s early career, loaded with perverse and often baffling metaphors including rabbit feet, ears, and fully intact bunnies. A routine inspection finds Jim shocked at what is in an Armenian bistro’s kitchen as they slaughter rabbits in house for a fried rabbit ear dish. Once again, the filmmaker’s wife Arsinee Khanjian plays a kind of healer in Jim’s process as the co-owner of the bistro who shows him a certain level of hospitality to avoid getting shut down. Later, Benjamin Bunny–a gift he gave his daughter early in life and now cares for while she’s incarcerated–proves to come in handy later as Jim meticulously plants evidence in a pub’s restroom in a scene that edges, like Egoyan sometimes does, up to the line of dark comedy.

Perhaps Guest of Honour is best read as a convoluted dark comedy; for the uninitiated, the material may seem freshly perverse, but themes from his previous works are often revisited to decent effect. If Egoyan wasn’t so masterful at misdirection–burying what in chronological order might have an over-the-top soap opera about a health inspector and his daughter, into a complex character study of two damaged characters–it might have been unwatchable. Mediocre Egoyan, after all, is better than most genre filmmaking. The absurdity of the situation that lands Veronica in prison nearly derails the entire thing, but Guest of Honour is fascinating and entertaining in the moment–led by David Thewlis in his best performance since Mike Leigh’s Naked.

Guest of Honour screened at the Toronto International Film Festival.