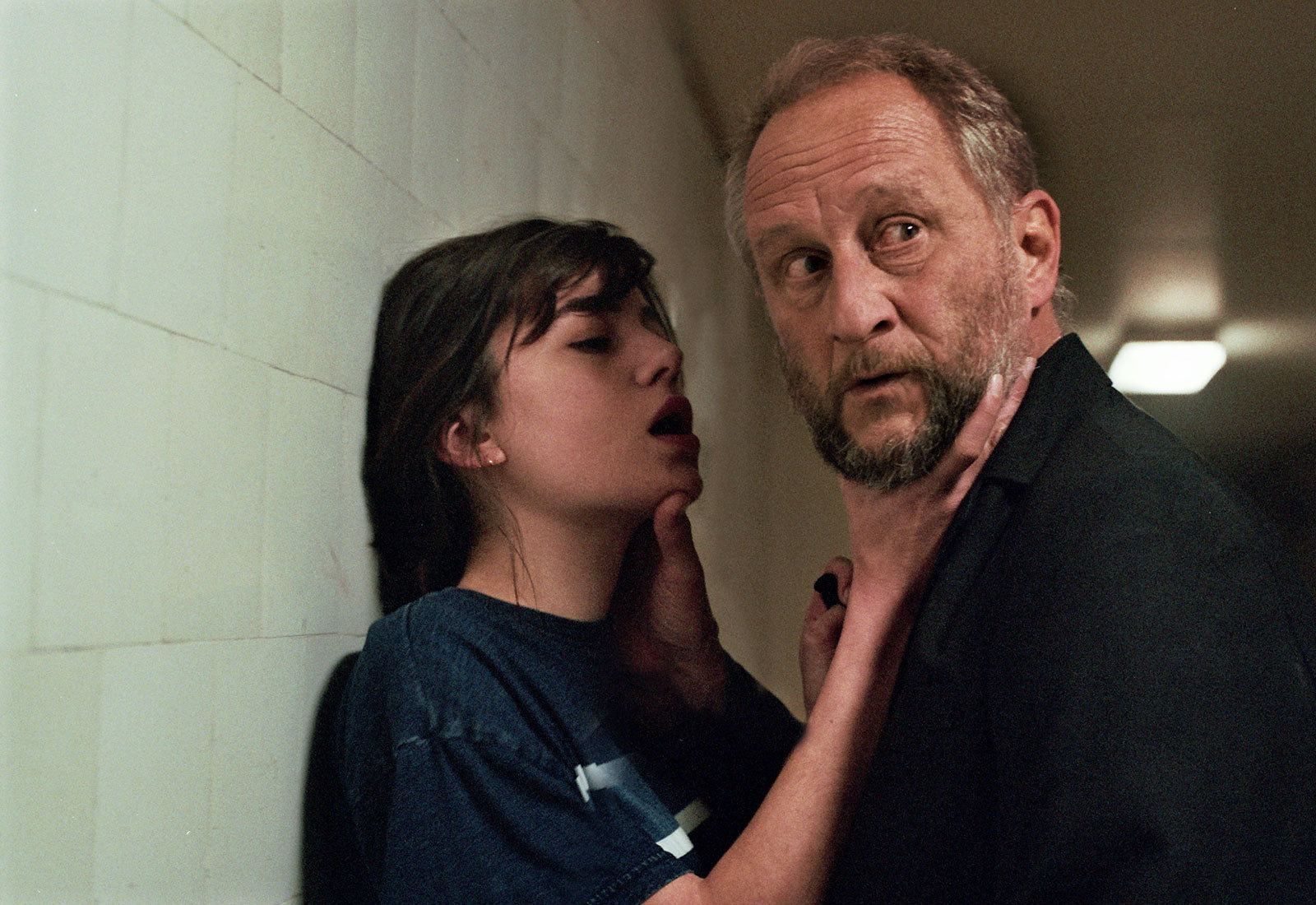 While handsomely shot, well-cast, and occasionally atmospheric, the latest from Belgian director Fabrice Du Welz qualifies as a watchable disappointment. Inexorable reaches for the somber allure of Claire Denis’ Bastards and instead has the psychological force of a particularly rote ’90s thriller. A shame when all the ingredients are in place for something deeper and more unsettling.

Benoît Poelvoorde, so memorable as the lead in 1992’s Man Bites Dog—streaming on Criterion Channel, still a must-watch—is Marcel Bellmer, a novelist moving into a gob-smackingly large country estate with his wife and young daughter. Said wife is Jeanne (Mélanie Doutey), and the estate was the home of her late father, a noted publisher. The giant mansion goes oddly unexplored in Inexorable, and that is a literal waste of space. We never get a sense of its geography or feel any sense of its hidden corridors.

Into this environment comes Gloria (Alba Gaïa Bellugi), a quiet young woman who quite literally seems to appear from nowhere. She arrives in town, checks into a small hotel, and is soon stalking the grounds of chez Bellmer. Gloria endears herself to the daughter, Lucie, when finding the family’s majestic, newly acquired dog Ulysse. After a meet-cute that quite impresses Jeanne, Gloria is hired to drive Lucie to school, look after her, and stare with intensity at Marcel. Indeed there are ulterior motives at play and dark secrets to be unearthed.

Soon, Gloria is faking injuries, lusting after Marcel (“I’m your inexorable,” she coos), and raising Jeanne’s ire. As Marcel’s interest in Gloria is piqued, Poelvoorde’s hold on the part is loosened. The actor gives a blustery lead performance, straddling the line between believably perturbed and way over-the-top. It does not quite work, nor does the performance of Doutey, who is saddled with a non-character. (Do not even ask about young Lucie, who is featured, onstage, in what may be the film’s least-believable moment.)

What does work, and in fact rises to the level of excellence, is the performance by Alba Gaïa Bellugi. Even at her most destructive moments, Gloria is the most embraceable character. (Well, Gloria and Ulysse.) No exaggeration to say Bellugi, known best for her performance in the 2011 French crowdpleaser The Intouchables, gives a star-making performance. Alas, there is little else to recommend. During each moment spent with Marcel, Jeanne, and Lucie, we long to return to Gloria. Yes, she is unhinged. She is also mesmerizing. That is not from the script—rather, it emanates from Bellugi.

Du Welz is a director who knows how to build tension and simply adores bathing sequences in blood-red light. His 2008 Emmanuelle Béart- and Rufus Sewell-starring psychological horror Vinyan was far more engaging. With Inexorable, Du Welz is let down by the patchy script co-written with Joséphine Darcy Hopkins and Aurélien Molas. Its big reveals are unengaging and unsurprising, and it all leads to a bloody climax that is neither memorable nor satisfying. A number of key questions are left unanswered, and the ambiguity is annoying rather than mysterious.

Above all else, Inexorable lacks the sense of joyful absurdity that can elevate a hackneyed thriller to a delectable trifle. There is no fun factor here, but Bellugi is just enough to warrant spending 90 minutes in its world.