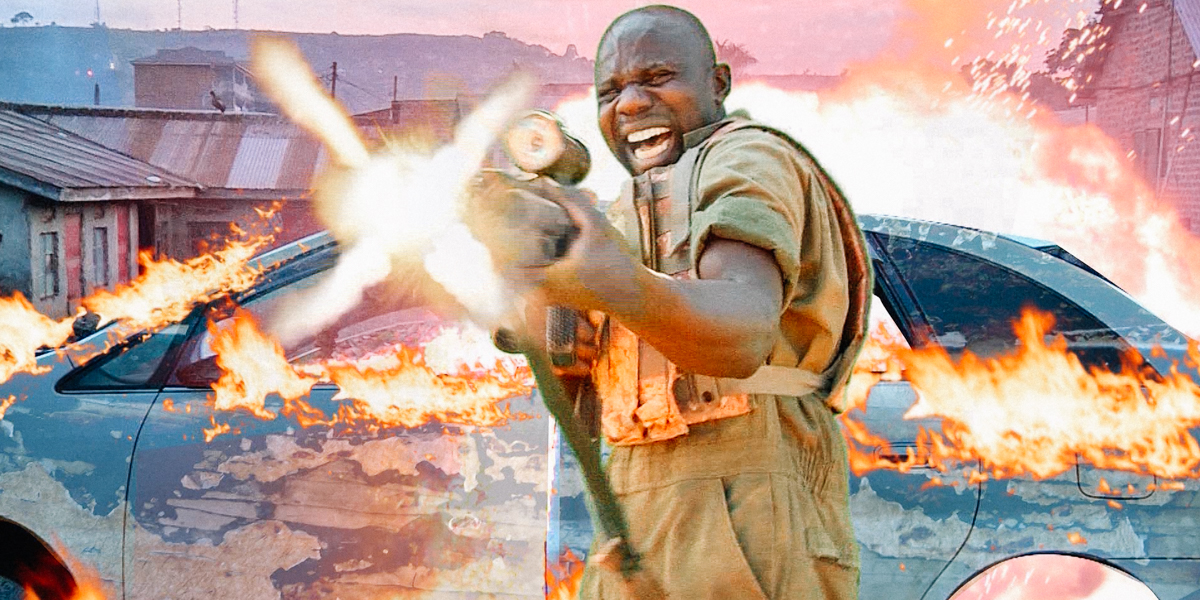 It’s hard to discuss Crazy World without mentioning the experience of seeing it. As the final screening of TIFF’s Midnight Madness programme, the film was accompanied by both a comic hype-man live-commentary from “video jockey” Joker and a William Castle-like in-theater sketch that interrupted the middle of the picture. Having felt like the viewing of Crazy World was a genuine once in a lifetime moviegoing experience, this review may openly be framed as less an analysis than a call to attention for distribution or at least further exhibition for this wild movie.

Though first, context: hailing from Uganda, the Wakaliwood Collective has gathered attention from important genre circles in North America for making rambunctious action films with very minuscule means; featuring muddy digital cinematography and Birdemic-like CG effects, they straddle an impressive line between sincerity and irony (with the former definitely winning out). They may be aware of their limitations, but they actually showcase people having fun. Frankly, it’s infectious.

In the “titular” crazy world, a number of kung-fu fighting kids known as the WAKA Stars are kidnapped by the Tiger Mafia, led by a pint-sized child gangster. A rescue mission proceeds from the children’s parents, though they certainly won’t be the only ones carrying the ass-kicking weight. Of course, discerning the plot amidst the chaos feels like a bit of a fool’s errand. Simply not letting up, the film is, at 63 minutes, a continuous stream of loudly sound-mixed kicks, punches, and gunshots. The cheap digital cameras afford it a kind of mobility in the action scenes. Really, the film doesn’t have to be treated with apologia, as the clearly delineated action and impressive fight choreography remind us of a lost art. Don’t trust any chuckling nincompoop who files this film under “so bad it’s good” territory.

With reference points of Rambo, Bruce Lee, and Chuck Norris, the film harkens back to classic action cinema and thankfully not the superhero monopoly which has formally flattened out the original intentions of the genre (even a young child character, the Marvel target audience, is told by their mother that their brain has been rotted by Norris pictures after practicing martial arts in their home). Having been pummelled a month earlier by the truly depressing “80s throwback” Hobbs & Shaw, Crazy World came as a welcome respite from the tacky, weightless, “tongue-in-cheek” product that passes for action cinema these days. In addition, it stood in stark contrast to another festival entry, Dolemite is My Name, which reduced a similarly community-specific exploitation cinema into a bland biopic.

Seeing something so clearly hand-made if highly confident projected on the big screen felt like a privilege. Arguments of “it’s not for everyone” will fly around, but frankly at a time when everything is so corporatized, it feels like something is actually at stake here in advocating for Crazy World. So this review can end with a plea of sorts: check out Wakaliwood! And programmers, distributors, don’t forget to book the video jockey!