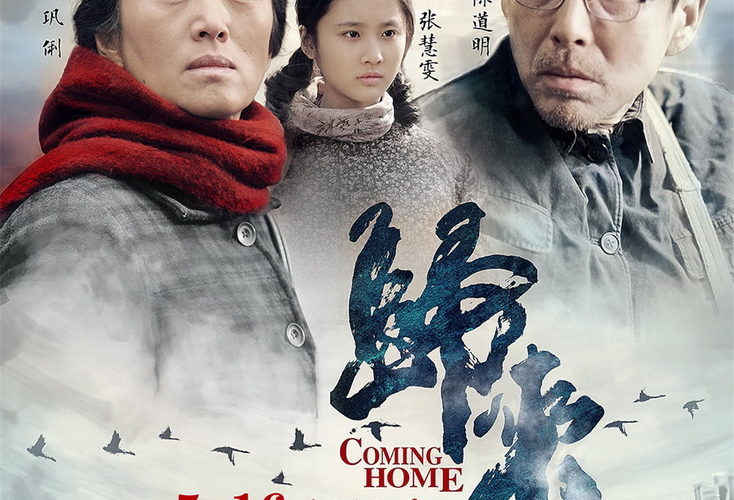 I kept trying to think about what films Zhang Yimou‘s Coming Home reminded me of while watching. Obvious ones came to mind like Away From Her and Amour where Gong Li‘s Yu was concerned and even Atonement for Huiwan Zhang‘s Dandan. But it was a fellow audience member as we walked out who said it best: 50 First Dates. The selection resonated with me because until three-quarters of the way through I thought people laughing were crazy. This is a sensitive drama with heart-wrenching performances. Around act three, though, I began to realize the humor may have been intentional after all.

The film isn’t a comedy by any means, but Yimou isn’t afraid to lighten the mood where his tragic conceit is concerned. During his TIFF North American premiere introduction he states that he hoped the work would expose a world of people to what occurred during China’s Cultural Revolution. And he does exactly that with this subtle humor able to deflect the otherwise severity of what has happened to novelist Geling Yan’s characters. Family patriarch Lu (Daoming Chen) isn’t the only one who ultimately tries to return home—everyone does. The constant is the historical backdrop that broke them apart in the first place. Adapted by Jingzhi Zou, the story begins with Lu’s escape from political prison after ten years away. He’s barely seen his daughter who’s grown up under Mao Zedong’s regime to hate him for being a traitor to the party’s ways. So just as Yu cannot pass up the opportunity to see the man she loves, Dandan takes his potential return as a chance to get even for what he has done to the family’s name. As a headstrong young girl, temper and jealousy rule until they drive her to make a decision that will tarnish her relationship with her mother forever.

If that seems bleak, it’s only the set-up. Another three-years go by to portray a new China ready to call its political prisoners rehabilitated. While we might initially believe Lu’s legal release to be the titular “coming home,” it proves but one of a trio of examples considering those final years rendered irrevocable changes at home. I don’t believe it’s ruining anything to say that Yu now has a form of amnesia rendering her unable to recognize her husband. So even though he’s home, he isn’t truly. Couple that with Dandan’s exile for a childish mistake of grave consequences, “home” is a much heavier word than its definition.

To say more about the plot would be a disservice because the impetus for Yu’s affliction is meant to hit harder than easy assumptions. Tempering this revelation is the softer side of the second half wherein Yimou embraces the inherent comedy of the situation. Having a woman not know the husband she’s pined for over a decade is fodder for a farce and yet here it is at a time of history where a “win” is in desperate need. You’re therefore allowed to laugh when Yu opens the door a third time on Lu, asking who he is to which he must answer anything but his real name. She wouldn’t believe him anyway because she’s picking him up on the 5th in perpetuity. Coming Home is a different Yimou then someone I discovered through Hero and House of Flying Daggers, a reassuring notion as it ensures audiences look back at the quieter classics he brought to life earlier in his career. His latest is an effective drama consisting of devastating performances. The need for forgiveness, sacrifice, and compassion on behalf of Yu, Lu, and Dandan is paramount and we must believe them all capable despite the horrific circumstances they’ve lived with during ten-plus years that left the family forever incomplete.

Zhang rises to the occasion and equals two legends in her debut. The role is very similar to Saoirse Ronan in Atonement, portraying her evolution from angry, confused child to humanity’s remorsefully fallible norm. Li will break your heart each time she lashes out thinking her husband is someone she fears and Chen’s sadness is etched onto his tired face throughout. He’s met a moment he imagined would be glorious reunion and found it depressingly unbearable. Love isn’t easily lost, though, so you better bet he’ll embrace becoming a stranger if it keeps Yu close.

Coming Home screened at TIFF and will be released by Sony Classics on September 11th.