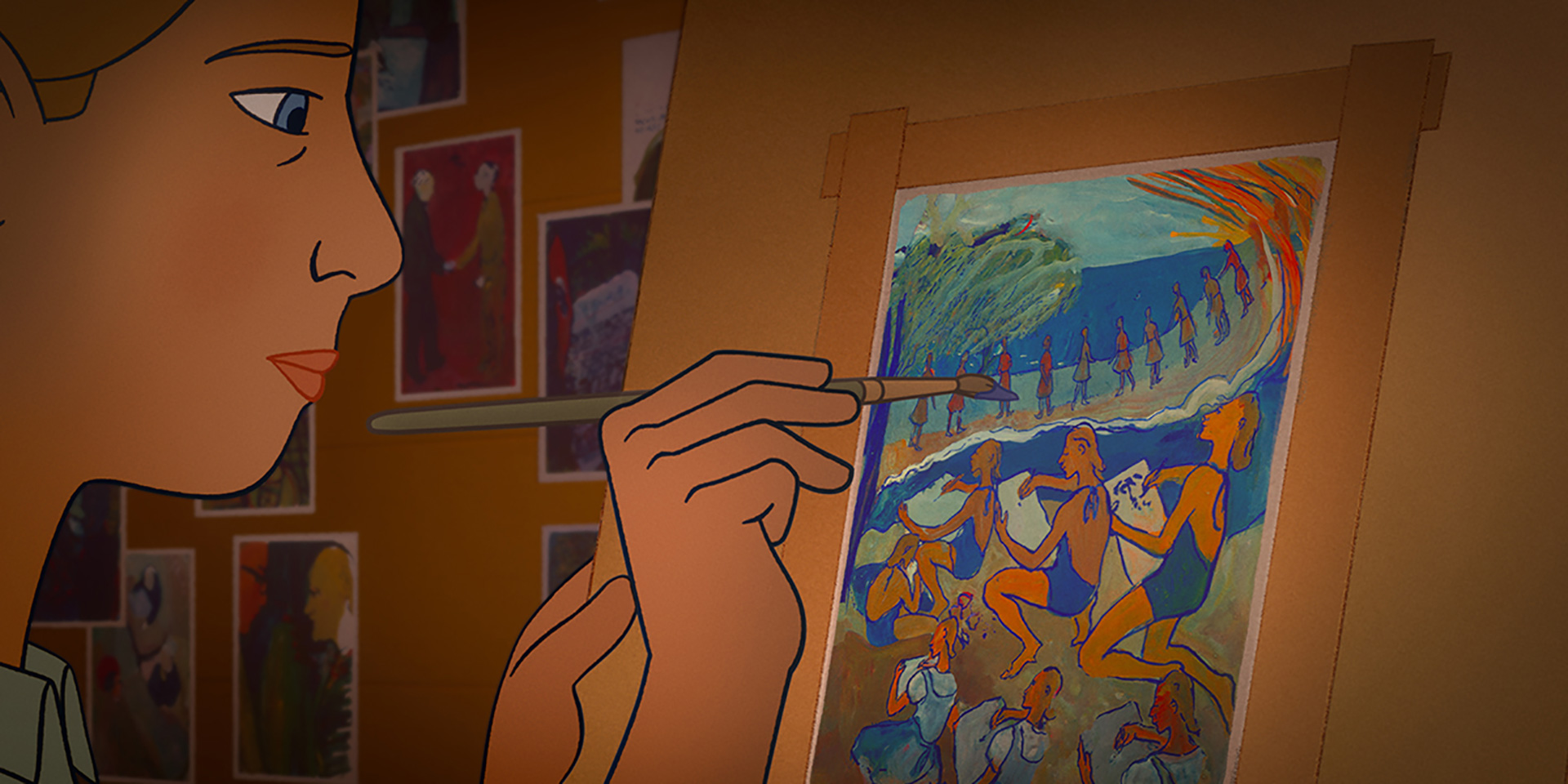 Similar to co-director Tahir Rana before tackling the project, I too had never heard of Charlotte Salomon before sitting down to watch it. This fact seems weird considering many hold her posthumous masterpiece Life? or Theater?: A Song-play as the first graphic novel. A pedigree like that shouldn’t be swept under the rug—especially not when you delve into her work’s content and begin understanding all she endured as a German Jew during World War II. You would think her name is held in similar esteem as Anne Frank for depicting the Holocaust’s brutality, so perhaps Rana and Éric Warin’s film Charlotte (written by Erik Rutherford and David Bezmozgis) might help right that wrong if only by shining a light upon her.

Though they could have created a documentary and done more. I get the impulse to bring a painted story to life through animation, but nothing onscreen truly justifies this medium as its best avenue forward. There are some gorgeous chapter breaks wherein a Salomon original is recreated from underpainting to line work with fluid absorption and stunning colors, but you could keep those regardless of how the content they separate is presented. It would be a different story had the filmmakers based their style upon hers—the paintings recalled Amedeo Modigliani most for me—rather than simple cell animation with copious drop shadows providing depth. Such matter-of-fact execution gets the job done, but it sadly never takes that next step towards greatness.

They also do themselves no favors by sharing black-and-white footage of Charlotte’s father and stepmother talking about her life and work after the war. It’s so captivating and crucial to the whole that I couldn’t help find my dissatisfaction with everything else grow in its impersonal reenactments by comparison. Live action might have even better mined the emotions voicework by well-known British actors cannot reach. I feel bad saying this, too, because the result isn’t a total misfire by any stretch of the imagination; it just can’t exist in its current form without viewers thinking about how it might have been improved. There’s too much character and depth to Salomon’s experience and art to let capturing half its weight prove anything but a disservice.

We’re talking Nazis, suicide, murder, and love. Charlotte (Keira Knightley) is a novice at the start of the war, with aspirations for more through university. She could have left Germany to go abroad, thanks to the kindness of an America stranger in Italy (Sophie Okonedo’s Ottilie Moore), but her family was very proud of their German heritage and had well-paying jobs to keep up (Eddie Marsan plays her doctor father Albert and Helen McCrory her opera singer stepmother Paula). So while her grandparents on her biological mother’s side (Jim Broadbent’s Grosspapa and Brenda Blethyn’s Grossmama) do leave (for health reasons—don’t you dare say they fled), Charlotte stays behind and ultimately sees her dream become a reality. Despite her Jewish race, she’s allowed to learn—for now.

Cue romance #1 with Paula’s singing coach and World War I veteran Alfred Wolfsohn (Mark Strong), the unfortunate escalation of the Third Reich’s stranglehold, and the beginnings of Charlotte’s knowledge that still-lifes and portraits can’t hold importance in this moment without also finding their relevance within it. She learns about life (albeit through fortune-cookie sentimentality while in the throes of love) and the horrors of humanity. Secrets are, inevitably, also revealed that show just how insulated her family’s wealth had kept her. History and the present collide in ways that would destroy the best of us, but she refuses to break. From romance #2 (Sam Claflin’s Alexander Nagler) to relocation, the drive to paint her own story grows until it becomes her existence’s sole purpose.

It’s a compelling journey often rendered inert by quick transitions from one tragedy to another. The whole reads like an abridged account—which makes sense, as it’s based on a snapshot collage of 769 individual works strung together (as well as other documents)—rather than an emotive piece of cinematic storytelling. I would compare the film to a lecture before I would literature, yet it serves its role. I now know who Charlotte Salomon was, what she did to remain alive, and what it was she survived. With that basis I can look upon her book and better understand the context behind each frame while experiencing the power they hold beyond linear narrative conventions. Charlotte‘s use therefore falls short of its ambition, more companion than equal.