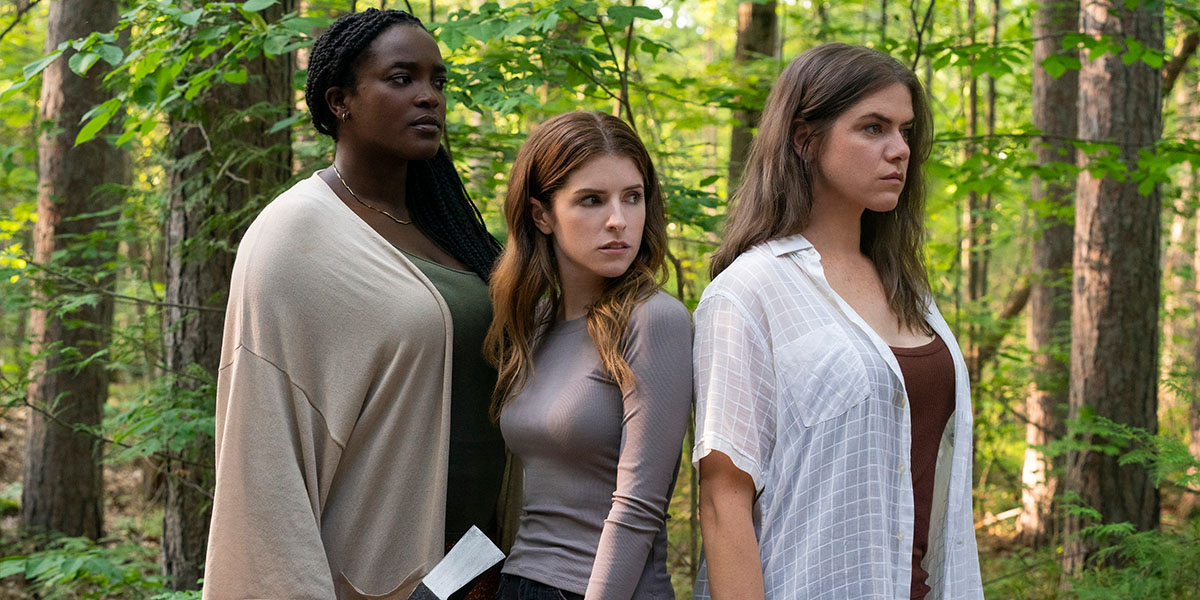 Everything you need to know about Alice’s (Anna Kendrick) state of mind concerning the abuse inflicted by her boyfriend Simon (Charlie Carrick) are the words “it’s not like he hurts me.” We feel Sophie’s (Wunmi Mosaku) wince in our bones—”hurt” doesn’t only become noteworthy when wrought by a physical altercation. Alice is glued to her phone to ensure she doesn’t miss a call or text. She wakes up super early to apply make-up and style her hair to Simon’s preference. Parrots all the soundbites he uses to police her eating habits about the toxicity of sugar. And literally pulls her hair out of her head whenever she has a spare second of freedom because the pain is all that stops her from acknowledging her crippling shame.

Moments in bathrooms—her “safe” space—tell us how bad things are. While we can see the signs of coercion and gaslighting whenever Simon wields his calculating smile and the brainwashing and fear whenever Alice is with her friends, we can’t quite know the extent. And neither can Sophie or Tess (Kaniehtiio Horn), Alice’s oldest besties. They obviously know she has changed during the time she’s been with Simon. It’s impossible to ignore her slipping away from them due to a penchant for blowing them off or leaving early whenever they do get a chance to hang out. Without seeing beneath the surface, however, they jump to the conclusions they want to be true. Alice being a flake is better than Simon emotionally tearing her apart.

Yet that’s exactly what he’s doing—systematically, selfishly, ruthlessly. Screenwriter Alanna Francis (who wrote the underrated gem The Rest of Us) and director Mary Nighy (in her feature debut) could have shown as much with extended scenes of the abuse, making Alice, Darling into a wall-to-wall trigger warning. That’s what we’d expect and, honestly, what would probably be easier to sell. But it wouldn’t be as truthful to the experience that too often occurs, wherein trauma builds an isolating prison around the abused until they believe they both have no place to turn and that it’s all their fault. Alice tells herself that she can’t make any more mistakes. That she can’t devalue their love. Her entire existence has become about pleasing only him.

It therefore means something that she agrees to partake in a week-long celebration for Tess’ thirtieth birthday. Alice doesn’t tell Simon that’s where she’s going (he’s been grooming her to ditch those two once and for all so she can be his alone). She lies and says it’s a work excursion that she cannot miss—the only way he’d ever agree to let her go without guilting her with the talk of abandonment that he’ll soon use as a means of bullying for an early return. Knowing the subject of the film had me assuming this “party” was also a lie, that Sophie and Tess were clandestinely staging an intervention. That would be too overt, though. Too perfect. This story resonates precisely because it depicts their communal epiphany.

And despite those scenes in the bathrooms, Alice cannot see past the emotional terrorism during her day-to-day. Simon is always there by extension courtesy of proximity and cellphones. He can interject himself in her life at any time. So while the expanded distance of this trip is in and of itself a cause for panic with her mental anguish turning physiological, it’s also an opportunity. The challenge is whether Sophie and Tess can better interpret the context clues erupting due to prolonged exposure to them. Alice has nowhere to run now, and they have no excuse not to see beneath her otherwise pristine façade. And the signs are devastating. From a compulsive desire to chop wood to a meltdown when losing an earring Simon bought, Alice is unmoored.

The result is potent—both where Alice’s daily confrontation with debilitating despair and the strength of this central friendship are concerned. Francis adds a subplot concerning a girl who went missing around where they’re staying to provide a telling metaphor for just how lost Alice is and how bad things could feasibly get if Simon evolves his aggression from psychological to physical. Nighy focuses closely on the character’s subconscious, homing in on the back of her neck as the sound of hair ripping blares through the theater speakers or quickly cutting to glimpses of the origin of this self-harm by way of image (generally Simon smiling at her) and voice (his forceful manipulations). They put us in Alice’s headspace to bring her experience to light.

Even so, none of it truly works without Kendrick delivering one of the best performances of her career. Mosaku and Horn are great with pointed glances and justified frustrations transforming into rage for a powerful and jarring final effort to (hopefully) break the cycle once and for all, but even they can only go as far as she takes them. The role of Alice is very much internal and, as such, very reliant upon putting her thoughts onscreen. That we can also see those thoughts in our own minds simply through Kendrick’s thousand-yard stares, moments of lashing out, and visibly draining anxiety is a testament to her commitment to the character and the script’s nuanced complexity to allow her to say so much without saying anything.