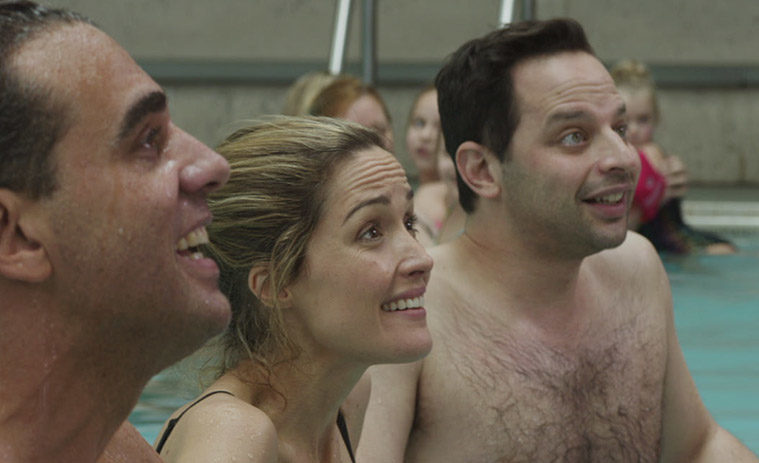 No one is ever going to say Ross Katz‘s Adult Beginners is original. The opening implosion for Jake’s (Nick Kroll) multi-million dollar investment project was done in Elizabethtown, his frightened guilt in not being there when his mother died of cancer is Garden State, and the estranged sibling relationship between he and sister Justine (Rose Byrne) is a trope used countless times each year. It’s a comedy about familial struggle with a bunch of adult “children” trying to find a balance in lives that are kicking them in the ass—plain and simple. You’ve probably already seen every situation writers Jeff Cox and Liz Flahive utilize this month alone and yet it still somehow works.

I give a lot of the credit to the one person I believed would be the film’s liability: Nick Kroll. If one feels his comedy thus far may land on the obnoxious side, Kroll’s range here as Jake should prove you wrong. He’s still best when playing the most selfish jerk in the room—as the jokes at the beginning will attest—but there’s a moment when everything comes to a head emotionally towards the end that he knocks out of the park. For the moments in between Kroll finds a way to give the character a rather authentic evolution too.

Starting as a depressive, failed rich entrepreneur who arrives at his sister’s door broke and in need of a hug she’s rightfully too busy to give, Jake discovers the compassionate heart he had lost decades before. Absent for at least three years and unaware of how old his nephew Teddy (Caleb/Matthew Paddock) is, he learns Justine and husband Danny (Bobby Cannavale) are selling his childhood home while on the cusp of expanding the family with a new baby — he deserves a hello, goodbye, and see you later. Instead, they extend an invitation to stay if he’ll agree to watch the boy. With nowhere else to go, Jake accepts. What follows is a series of funny circumstances we’ve seen anywhere from Three Men and a Baby to Life as We Know It that are made funnier because of Kroll’s dedication to the joke. It only takes watching him run around the frame with his ass in a plastic potty training bowl due to not trusting Teddy enough to go to the bathroom in peace for us to sit back and accept his egotistical prick as a human being. The film can’t survive solely on watching him become the brother and uncle he never was, though, so in comes Justine and Danny’s marital problems and how Jake fits into them both before and after earning a place in their lives above sending a generic Christmas card each year.

Katz paints many moments with sentimentality, but also leaves room for the performances to retain their bite within. This is especially true where Kroll and Byrne’s dynamic is concerned because they have a lot of unspoken history between them. You understand his self-centeredness at the start alongside her not really caring about his problems. After all, if not for Danny suggesting the cost-saving maneuver of hiring him as Teddy’s nanny, Jake probably would have gone back to the city to crash with vapid bud Hudson (Joel McHale). Even when they do grow close, though, it never feels artificial. Jake and Justine find common ground, but their personalities don’t change overnight.

And this is Adult Beginners‘ greatest asset—it isn’t afraid to not let the idyllic happily ever after fall apart and come back together in a split-second epiphany. Despite characters realizing the error of their ways, there are still stakes involved with each action. Real life doesn’t have easy answers and neither does the film. Cox and Flahive play with cliche throughout whether via Jake’s potential girlfriend (Paula Garces), ultimatums from bosses (Josh Charles), adulterous affairs, and even step parents. They don’t cut corners and retain the complexity of each as more than mere plot progression. As a result, the fun is therefore not as cheerily mainstream as its genre usually proves.

So with the obvious heart and ample supply of laughs come authentic examples of being flawed and wanting more. No one is perfect, no one has all the answers, and no one is better than the next. A lot of forgiveness has to arrive for any of them to still be talking to each other by the end and tough decisions must be made to willingly sacrifice hollow desires in order to attain the love of family. And despite it seeming familiar cinematically, Kroll and Byrne provide characterizations that are familiar to us. We get their struggles, their wanting to be someone else, and their strength to forgive. It may not seem much—and it may not completely forgive its shortcomings—but being able to say that is refreshing.

Adult Beginners premiered at TIFF and will be distributed by Radius-TWC. See our complete coverage below.