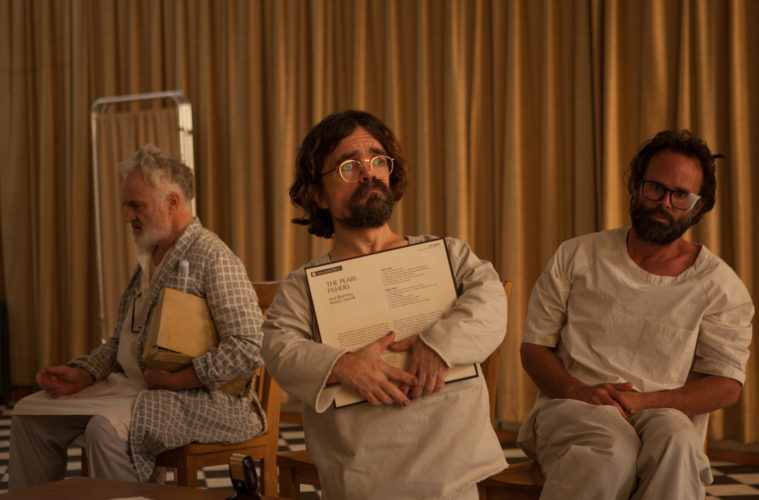 Two decades after publishing his study The Three Christs of Ypsilanti, Milton Rokeach came to the realization that his methods were both manipulative and unethical. He included an afterword in a re-release of the book to that effect—something surely helped by the supposed fact his research assistants questioned his morality while it was still being conducted. Rokeach’s goal was to cure three patients who independently believed themselves the one-and-only reincarnation of Jesus by placing them together in a controlled environment to confront the absurdity of their claims. Because there was precedent where reason snapping at least one of them out from their schizophrenic delusions was concerned, he pushed forward by any means necessary. He lied to influence their actions and thus played God to prove they weren’t.

It’s a fascinating real-life ordeal that begs someone to delve deeper into the motivations not only of the three men, but Rokeach as well. And while Jon Avnet and co-writer Eric Nazarian’s cinematic adaptation Three Christs touches upon the argument that four deluded men were involved, they never go far enough to make it matter. They actually ignore the entire conceit of Rokeach’s study the moment Joseph Cassel (Peter Dinklage), Clyde Benson (Bradley Whitford), and Leon Gabor (Walton Goggins) are moved into their private wing. Suddenly the film is no longer about whether they can become cognizant of who they are beneath their fictional shields protecting them from the pain of reality. Suddenly it becomes about Rokeach’s stand-in Dr. Alan Stone (Richard Gere) and his apparent sainthood.

He’s the hero. He’s the martyr. We can legitimately appreciate that angle at face value because he’s inherently acting against the psychiatric establishment circa 1959 in believing treatment can go beyond the brutality of lobotomies, electric shock, and heavy drugs. Stone arrived at Ypsilanti State Hospital with a promise to advance the field at the behest of the man who cajoled him away from academia (Stephen Root’s Dr. Rogers) and the chagrin of hospital supervisor Dr. Orbus (Kevin Pollak). Joseph, Clyde, and Leon provided that chance if he was given full control over their care without interference. While that stipulation did allow his patients a level of trust, it also insulated him from the outside perspective needed upon his jumping off a tenuous cliff separating reward from risk.

The film only scratches the surface of this challenge to instead focus upon the potential for these four men’s shared kinship. That in and of itself would become a huge accomplishment considering Stone’s patients have already physically accosted each other for being “pretenders” to their respective “true Gods.” He uses music, camaraderie, and shared suffering as tools since Stone (and Charlotte Hope as his new research assistant Becky) comes to the table with his own tragic history. You might say his wife (Julianna Margulies’ Ruth) is also marked by the past after hearing her loaded confession later on, but she’s pushed so far to the fringes that its inclusion proves more distracting than dramatically additive. Soon everything gets distilled to Stone versus Orbus anyway—the others caught between.

In that respect Three Christs works even if it ultimately feels manipulative in its own right. If you don’t know the real story and eat up what’s onscreen—namely that Stone is always well-intentioned with everyone but Orbus being willing to give him the benefit of the doubt—you should have an enjoyable time both with the situation’s comedy and suspense. The latter is where it excels in part because of the script’s ability to exploit our emotional connection to damaged characters being so unfeelingly abused. We know it’s all working towards a heavy climax once Stone’s lies are used against him and we become genuinely worried about the consequences. The moment I learned Rokeach’s truth, however, my blind allegiance to the doctor evaporated in an instant.

So while Avnet’s film is effective melodrama, it’s hardly a completely honest depiction of what happened. The simple fact that Rokeach’s name was changed despite his patients’ names remaining the same reveals how extensive the shift into fiction was. Does it expose the filmmakers’ strings as far as how they altered things to create a bona fide “hero” and “villain” where flawed characters that acknowledge their errors conversely existed? Yes. Does it diminish the work of the actors portraying those roles? No. Gere is playing a fantasy-version of Rokeach and he delivers exactly what Avnet and company need from his knight in shining honor. He’s a family man who will put his own safety on the line for those under his protection. He cares about humanity.

Pollak becomes his contrast as the opportunistic Orbus, a man who seems to possess the imperfections Rokeach did as far as wanting to play God. He does so for glory rather than science, though. He can’t be bothered with any of it until Stone’s progress shows the benefits in a way he can understand: publicity. That makes him a Devil figure to Joseph, Clyde, and Leon. He’s the man who orders them strapped to a gurney for an electric jolt while Stone stands as their last chance at hope. And we believe it through their performances. Whitford is the most cartoonish insofar as “insanity” beyond mere confused identity with Goggins providing an aggressive intensity that conjures fear in those around him. They fully buy into their psychological profiles.

Dinklage becomes the movie’s heart and soul in response. He’s the sensitive Jesus who only fights back whereas the others provoke. He projects an obvious sense of vulnerability that moves past any diagnosis could and Stone latches onto it as a reason to keep pushing forward despite Dr. Rogers’ objections. His Joseph tugs at our heartstrings so much that we forget the whole “Jesus” angle has been tabled until the moment his mix of fragility and strength has been building arrives. To me it’s enough to appreciate how far these characters have come regardless of whether the whole reason they’re placed together is usurped. The filmmakers intentionally distanced themselves from reality by sanitizing Rokeach’s abuses at his victims’ expense until they positioned “Stone” as a liberator instead.