TIFF Review: Rosamund Pike is a Charismatically Ruthless Anti-Hero in the Black Comedy I Care A Lot 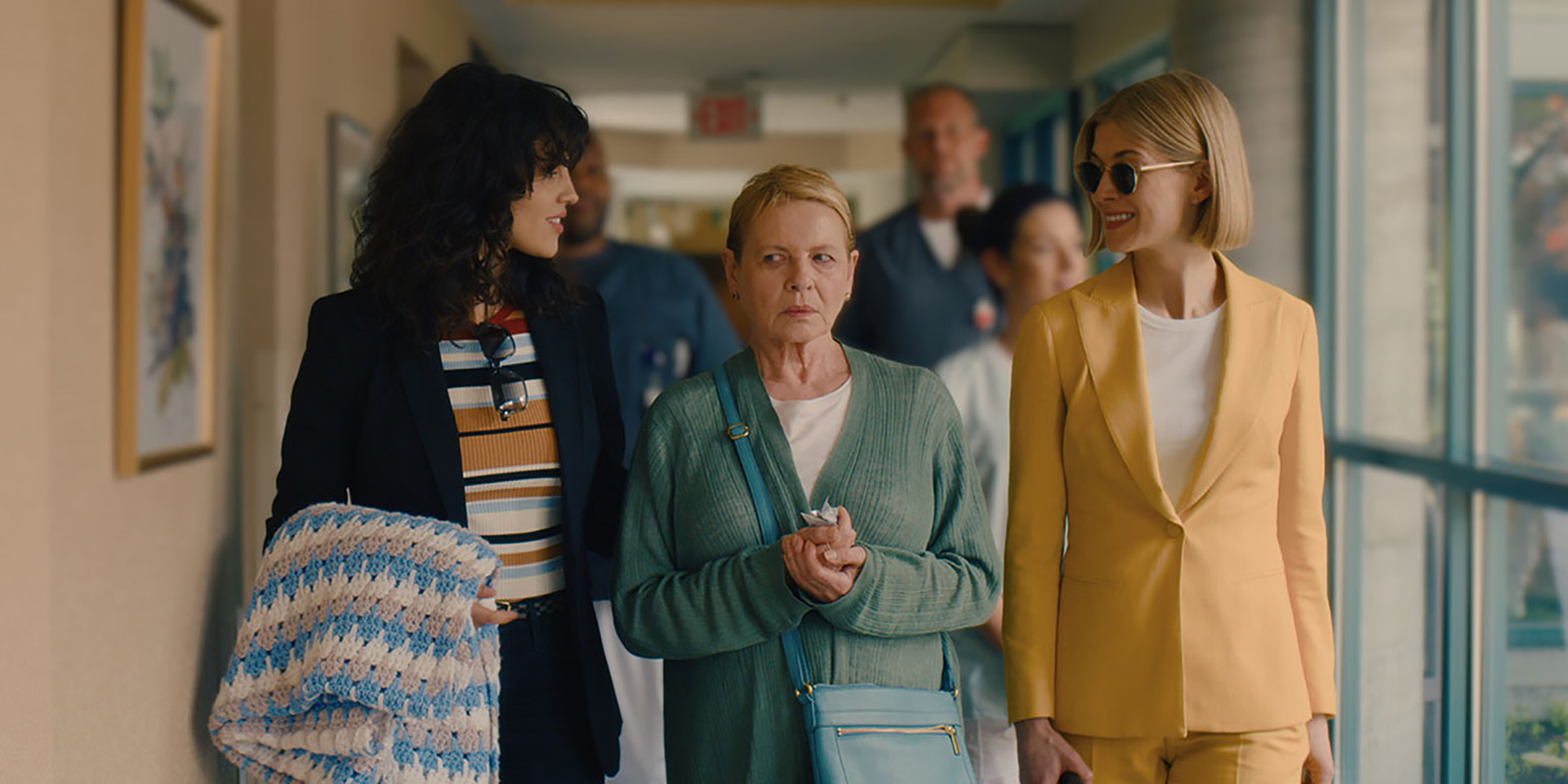 It’s the kind of grift that would make ‘Slippin'” Jimmy McGill proud. Marla Grayson (Rosamund Pike) calls up her friend Dr. Amos (Alicia Witt) to get a line on any prospective dementia patients with good insurance and ample nest eggs that have come through her office. She gets her partner (professionally and romantically) Fran (Eiza González) to run a background check with help from police contacts and calls an emergency trial with Judge Lomax (Isiah Whitlock Jr.) if their assumptions can be corroborated. The senior man or woman doesn’t have to attend. His or her lawyer doesn’t have to be contacted. All Marla has to do is convince Lomax he/she can no longer look after him/herself and she wins control over everything: finances, property, and visitation.

As far as the court and the state are concerned, Marla epitomizes the title of J Blakeson’s I Care A Lot. To them, she is a charitable woman using her resources to ensure none of this country’s elderly is left behind to die alone because of negligent family drooling over their potential inheritance. We know better, however, because we’re privy to what goes on behind closed doors. There are quid pro quos with Dr. Amos. The underhanded auctions for vacant rooms at Sam Rice’s (Damian Young) top-of-the-line assisted living community. And, of course, that gorgeous fake smile Marla uses when twisting the knife into the back of a client’s loved one as they realize her power of attorney is airtight. She bleeds each dry and then recruits another.

Blakeson provides her the type of opening monologue usually afforded to protagonists who explain a corrupt system in order to reveal what they’re doing to reform its evil. While Marla does talk about the rich getting richer and the poor getting poorer, however, she flips the script on that last part by admitting the truth of this dog eat dog world and her ambitions to make certain she fills her belly so as never to grow hungry. She’s our charismatically ruthless anti-hero and we find that we love to hate her precisely because she has no scruples. Where the aforementioned McGill (aka Saul Goodman) still retains a soul and thus a modicum of empathy, Marla is a full-blown sociopath. She does therefore care a lot, but only for herself.

Enter the latest “cherry” that crosses her desk: Jennifer Peterson (Dianne Wiest). Here’s an educated and successful senior who owns her house outright and has no living relatives that made the tragic mistake of walking through Dr. Amos’ door. If Marla sinks her claws into this unsuspecting woman who is obviously in control of her faculties, the sky is the limit. Lock her away in Rice’s home, confiscate her cellphone, and sell everything the next day. Search around for anything that may not have a paper trail (any non-documented assets can easily go “missing”), pay Sam for the room out of the estate’s account, and bill herself whatever rate is best to siphon off as much as possible before Jennifer’s impending death can close the account.

The twenty or so minutes that go into this set-up are highly entertaining because everyone involved is living their best life chewing the scenery and leaning into their characters’ complete lack of ethics. It’s only the beginning, though, as a conflict beyond a general populace hating Marla for what she’s doing to their parents and grandparents is necessary to hold our intrigue. That’s where Alexei (Nicholas Logan) comes in with an impromptu cab ride for the recently displaced Mrs. Peterson. Because we know she didn’t call him, it’s obvious his appearance was scheduled and thus evidence that there’s more than meets the eye with the sweet old woman he came to collect. The “more” is a Russian mobster with an emo haircut and affinity for frosted baked goods.

I mention those superfluous details because Blakeson has a knack for injecting silly things like them into an already ludicrous plotline to keep us entertained and humored for the insanity yet to arrive. While most of that chaos is created by this unnamed crime boss’ (Peter Dinklage) desire to procure Jennifer from her imprisoned plight, don’t underestimate Marla’s determination to bring a bit of pain to the equation herself. I Care A Lot turns into a heavyweight bout to see who will blink first: the man who has everything but the person he cherishes most and the woman who will use that person to get everything she wants. It’s villain on villain violence with nothing off-limits. They’re all horrible, expendable people primed to die for our pleasure.

The result is a black comedy that knows how off-the-wall it is. Why else would it bring in Chris Messina as Jennifer’s well-dressed and high-priced lawyer just so his failure to beat Marla in court can lead to Dinklage throwing a bottle of alcohol and plate of food at his head? Blakeson is all about escalation from set-pieces like bringing a gunfight into an old folks home to letting his actors loose like a drugged-out Wiest turning from innocent ignorance to sinister pleasure with a knowing smile. Marla never loses in a courtroom and Dinklage never loses on the street. It only takes one misstep to forfeit the upper hand and thus home field advantage, though. Who will ultimately find themselves on top at the end?

Nothing Blakeson gives us is necessarily new or unique, but his ability to put it all together into this very American capitalist greed package is fresh enough to enjoy that familiarity for its sheer hilarity. The ending he provides is pitch-perfect in that goal (save an epilogue whose shock value isn’t nearly enough to off-set its cheapness) and his actors are never too proud to play the fool either through ill-advised shows of strength or hubristic confidence in security. It’s great to see Pike really go for broke in a comedic role and an absolute treat to watch Wiest (who’s in this much less than I hoped) prove her post-Life in Pieces career demands more film exposure. Why be a hero when villainy tastes so much sweeter?

I Care A Lot screened at the Toronto International Film Festival.