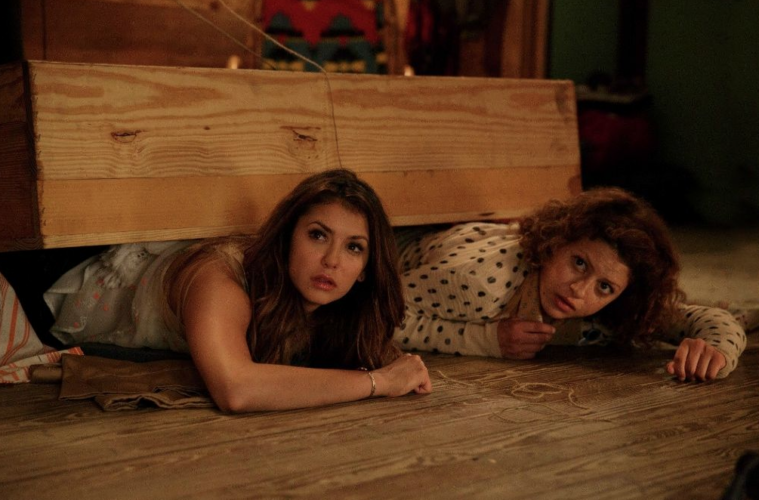 Out in limited release and available on VOD is the horror comedy with a fantasy twist, The Final Girls. From director Todd Strauss-Schulson (A Very Harold & Kumar Christmas), the film follows young Max (Taissa Farmiga) a year after her scream-queen mother (Malin Akerman) dies. When her cinephile friend invites her out to a celebratory screening of the film she was most famous for, Max and her group of friends are transported to the actual reality of the 80s horror slasher.  Once there the group must find a way to survive the relentless, murdering Billy. That’s a lot of setup and yet the The Final Girls manages to be quite smooth and smart in the way things are laid out. While the film mostly plays for laughs instead of horror, there are some more interesting aspects working at the core of the film when it comes to Max and her relationship with the onscreen version of her mother.

At SXSW this year I had a chance to sit down with the female stars of the: Taissa Farmiga (Max), Malin Akerman (Nancy/Amanda), Nina Dobrev (Vicki), Alia Shawkat (Gertie), and Angela Trimbur (Tina). Together we discussed the ways in which the director amped up the colors and how much ended up being shot on screen, the ways in which the characters toe the line of breaking the fourth wall, the incredible dance scene by Angela Trimbur that had everyone in awe, the 80s era clothing, and much more. Finally, there is a fun little spoiler discussion marked at the very end. Read on for the full conversation below.

The Film Stage: One of the things I love about this film is that Nina [Dobrev], your character, Vicki, as soon as you realize what situation you’re in, you’re like, “Where are the chainsaws? Where are the machetes? Where are the implements of death that we can use to fend off this guy?”

Is that what you think you’d be like? I don’t want to read into it and say that is you as a person. But do you have that kind of mentality?

Dobrev: Oh, for sure, yeah. I mean… I’d be the final girl. I watch a movie and I just think, “Turn the light on! Don’t walk in there! That’s so dumb!” That’s probably why I don’t watch many horror movies. But I’m very logical and very blunt. I think she’s bitchy because she’s misunderstood. She just says things straight as they are. She doesn’t have a filter.

Dobrev: To a fault.

Akerman: Eh. But she’s a survivor.

For you, Taissa [Farmiga], is it pretty awesome to think that you’re going to look like Malin Akerman when you grow up?

Farmiga: Are you kidding me? I’m so pumped.

Dobrev: Are we all going to look like our moms?

Farmiga: She’s my mom! Mine!

One thing that I enjoyed is that the film flashes back to these 70s and 80s era slasher films with the period dress as well. And I particularly love that when the modern group is flashed back in time, the camp counselors are so confused by how you are dressed. “Are you poor? What’s wrong?” The great thing about it is that in fashion, there is a cyclical nature. And right now, things like those high waisted shorts and stuff like that is hot again. Did you notice that on set looking at the costumes?

Akerman: My shorts were from American Apparel. And they’re the best. I see girls wearing them all the time. I’m like, “Hey, those are the shorts from this 80s movie I was in.” And Alia [Shawkat], you’re wearing overalls.

And a Genesis t-shirt!

One thing that I loved in the film is your dance scene, Angela [Trimbur].

Did you pick the song? How much choreography did you work on? I enjoyed your character throughout. You have some great comedic timing. But you really don’t have a big scene until then and I remember being so impressed and thinking, “Wow, did they pick her just because she can dance? What is going on here?”

Trimbur: Well… [laughs], thank you! I do a lot of dancing in my life. I have videos online of me dancing in public and such. So Todd [Strauss-Schulson] kind of knew that about me and trusted me for whatever I wanted to do for that scene. I didn’t prepare any choreography. It was just, “Pick a song. We probably won’t use that exact song.”

Trimbur: The actual song I danced to was something else and it ended up matching “Cherry Pie” perfectly.

Dobrev: And she never did the same dance twice. Each time there were different versions.

Nice, nice. So, I’m trying to remember. The camera angle is pointing in on the door looking into the cabin. So Angela is dancing in the foreground. Is anyone behind her in the frame of the shot?

Farmiga: Me and Nina were in the background.

So you have to keep a still face?

Dobrev: Yeah, it was really hard.

Dobrev: One of my friends kept asking me about that after the movie. She was watching the background and she said she couldn’t figure out how I didn’t break. But just remember being there and snorting while keeping my mouth shut. It was so hard.

So I was talking to the director earlier and I was asking him about all the vivid imagery in the film. He mentioned some things he shot in camera and others he did in post. For a scene like the final set piece with the lightning and such, was that done in camera?

Farmiga: Some of it was. They had huge smoke machines and lights behind it to make it purple.

Akerman: It looked magical on the day. Even the tree scene where we are sitting with all the flowers. That was very vivid already. Then they just amped it up.

Farmiga: Yeah, the art department like hand painted all these flowers or something.

Akerman: That was nice, too. To have all these differences between the real world and the camp world. It’s one of the reasons I loved this film: there’s so many different elements to it. Black and white flashbacks and slow motion and it’s really creative.

Another unique aspect of this film is that there just aren’t that many mother-daughter horror films out there, let alone with this specific dynamic where you are transported to a world where you are interacting with a character played by your mom. But, in the camp world, she isn’t your mother. It’s very meta and multi-layered.

Farmiga: That’s what was so great about it. There’s so many different levels to it. In the beginning it is Max and her mom. Then her mom dies and she goes into the movie and is interacting with this person that is her mom but it’s not her mom. It’s this character that she is playing. So from Max’s point of view it’s still her mom. But from Nancy’s (Akerman) point of view it’s, “Oh, this is a new friend. I like her.”

Farmiga: Then, how that develops later on is that they get close and the relationship builds. And obviously… well… Does Nancy finally understand?

Akerman: That’s where you leave it to the audience. When she goes, “That’s right, I’m a movie star.” You just go, “Wow.” So does she know? And I asked Todd that as well. And he said, “Well, let’s play it both ways.” Because it could be either way. And that’s the fun thing about it. Whether she is doing it because she just wants to put her at ease and let her know that she’s a wonderful person or is it because she is telling the truth? I love that moment specifically. It was a fun relationship to play because it is so intricate and difficult compared to the straight-up relationships that we’ve seen. You don’t know what the connection is.

Farmiga: But there is a connection.

Trimbur: The other thing I want to mention is how weird it is to have the film where we play characters in a film and these other people invade that reality. Tropic Thunder kind of did that but as soon as the cameras cut they go back to their own personalities. But here, you don’t see the cameras. Are they aware they are in a movie at all? Is that who Tina is or is that just what she is playing for the cameras?

Farmiga: Wow, that’s so much to think about!

Yeah, it really is.

Dobrev: Which is why it’s weird watching your character, Malin.

Akerman: She breaks that wall, sort of.

The Final Girls is now in limited release and available on VOD.