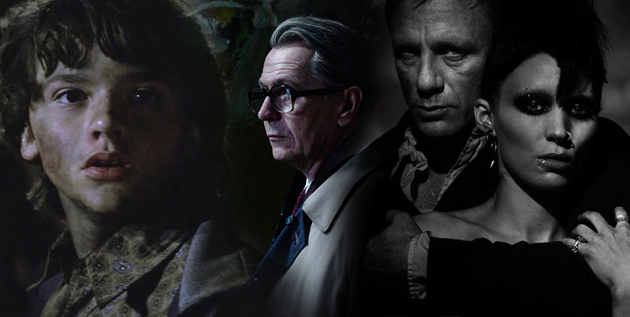 It may seem inane to highlight the year’s best pieces of marketing, after all their sole job is to get you in a theater. But akin to great short film, a few go above and beyond the call of duty, injecting enough creativity and spark to be truly memorable pieces on their own. The pickings were rough this year, as we were barely able to scrounge up ten worth nothing, but we’ve secured a final list that shows us no matter what the end product is, the craft of trailer-cutting is no easy skill. Check them out below and let us know your favorites.

The trailer for Pedro Almodóvar’s The Skin I Live In clocks in at just two minutes and it has the ability to leave you with a sense of confused intrigue as well as unsettling horror. It’s not very often that we see a trailer these days with sparse dialogue, but that doesn’t seem to faze anyone watching. Flashes of human struggle and the will to survive, mixed with an ominous techno soundtrack, provide us with an inside look into Almodóvar’s gruesome cinematic world where anyone and everything poses a threat. – Megan Elsen

9. Transformers: Dark of the Moon

Michael Bay‘s films are so overwrought, excessive and exhausting that they are more enjoyable in a concise form. I doubt that we’ll get a lean 80-minute cut of his latest Transformers blockbuster, so the next best thing is this full-length trailer. This piece provided just enough intrigue and spectacle to ponder if maybe this one will actually be worth it. It turned out to be just a step above its awful predecessor, but for that brief time, Paramount provided the necessary bait ‘n switch with this trailer. – Jordan Raup

8. We Need to Talk About Kevin

Kicking off with Buddy Holly‘s Everyday, this unsettling trailer shows us the beginnings of Kevin’s formative years without bluntly laying out the destruction that follows. Tilda Swinton‘s great performance is hinted at but it is the freeform visual style of Lynne Ramsay that reigns supreme in this effective piece. – Jordan Raup

Bane justifiably dominated the latest look at Christopher Nolan’s finale to his epic Batman trilogy. Between leveling a football field and delivering threats in an anti-Darth Vader wheeze, the trailer couldn’t be more dramatic in revealing one of the most mysterious characters of 2012. Pair it with the leaked prologue, which showed the Dark Knight Rises villain pulling off a jaw-droppingly creative airplane hijacking, and fans have more than one reason to chomp at their bits until next summer. – Amanda Waltz

We got two separate US trailers for Sean Durkin‘s striking debut, but the UK trailer for Martha Marcy May Marlene excelled in conveying the startling, detached nature better than any other piece. Opening up with the haunting Martha’s Song by John Hawkes, it quickly escalates to complete terror before ending with the best usage of the title yet. – Jordan Raup

Between the nervous strings and the methodical cutting, this trailer operates on the same corkscrewing mindset its film does. And while it does “trick” those watching that there’s more action in the film than there really is, what more honest spy trailer is there than the one which makes its viewers believe something that’s a lie? – Daniel Mecca

The trailer perfectly encompasses the dark, sexual and uncompromising nature of the film without ever giving any plot details away. It leaves everything to the imagination, teasing just enough to make you desperate to see more. It is a taster of the hauntingly beautiful experience that Shame is, and it does a wonderful job in whetting one’s appetite. – Jack Cunliffe

The verdict is in: Prometheus is definitely an Alien prequel, a revelation confirmed by one look at the highly anticipated trailer. Director Ridley Scott’s return to the franchise he started in 1979 should shed some light on what happened before the poisonous phallus-heads came up against the likes of Sigourney Weaver. A few fleeting, and yet very telling images, also hint at the possibility of a sci-fi movie that’s just as dark and imaginative as the original. – Amanda Waltz

The teaser for J.J. Abrams‘ summer sci-fi flick was featured on last year’s list, but the full-length trailer arrived this spring and it hinted at an utterly fantastic film. The actual thing fell short, but with the use of Through The Window from James Horner‘s Cocoon score, this looked to be right alongside Steven Spielberg’s greats, packing the perfect dose of mystery and childhood wonder. – Jordan Raup

1. The Girl with the Dragon Tattoo

Remember how exciting this freaking trailer was? Back in May when this red-band was “leaked,” David Fincher (cue heavenly choir) was still the golden boy who turned a long, boring story about entitled white college students into one of the biggest, most exciting movies of last year. The Internet had decided, based on her 5 minutes of screen time in The Social Network, that Rooney Mara was some sort of beautiful genius, and now here she was in her own movie! Plus Trent Reznor’s sweet music was back, this time in the form of a Led Zeppelin cover featuring the shrieks of indie darling Karen O. “The feel bad movie of Christmas”? It’s so dark! The finished product may have disappointed, but that’s only because this trailer was so damn good. – James Battaglia