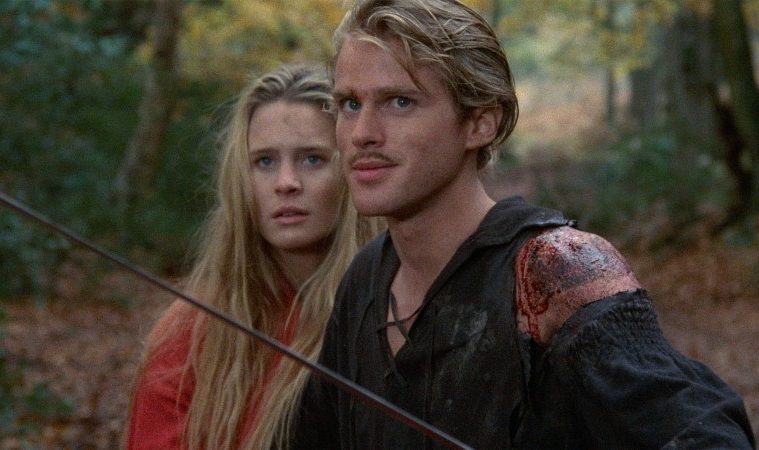 After Monty Python and the Holy Grail eviscerated the self-seriousness of the Arthurian epic but before Shrek added pop songs and fart jokes galore, Rob Reiner and William Goldman’s The Princess Bride was pop culture’s definitive postmodern comic fairytale. Penned by the late, great screenwriter based on his own novel (sorry–his abridged version of the novel by stuffy 19th-century fantasist “S. Morgenstern”) Goldman’s most beloved creation plays to the uninitiated as a deliciously eclectic mixture of loquacious wit, dry self-mockery, and sweetly earnest paean to pure storytelling–long before such tropes became codified cliche in blockbuster genre cinema. Its precarious balance between irony and sincerity has often been copied, but never truly replicated.

The comic adventure at the story’s core remains as charming today as it was thirty years ago, filled with loving pastiche of the romances of old: passion, intrigue, honor and vengeance all drive a rich ensemble cast of rogues and royalty (portrayed by a who’s who of once and future stars, from premium-TV breakouts Robin Wright and Mandy Patinkin to comedy legends Billy Crystal and Christopher Guest) through fairytale locales almost as colorful as their bold-faced archetype personalities and urbane, witty dialogue. It’s fortunate that Goldman was on hand to adapt his own work, however, because many other writers might have balked or shrugged at the prospect of translating the novel’s defining metatextual framing device to the screen: the withering, dithering color commentary of Goldman’s fabricated proto-Lemony Snicket narrator persona on the fabricated book-within-the-book, used to deliver cheeky parody of the European romances even while lovingly invoking “the good parts”. Lesser writers might have simply excluded this aspect of the source material (or even refashioned the narrative around a more impartial cinematic narrator, as Stanley Kubrick did in adapting the actual 19th-century novel that became Barry Lyndon), but Goldman and Reiner cleverly translate it to a cinema-friendly framing device that is equally subversive and iconic in its own right.

Rather than a scholar adapting the work of “S. Morgenstern” for a contemporary audience, the narrative interpreter of the fictional novel is now a suburban grandpa (Peter Falk) with a Polish immigrant affect, conveying the old-timey story to his skeptical bedridden grandson (Fred Savage). Reiner takes great joy in decorating the fictional boy’s room – the film’s only set outside of the couched fantasy narrative – with every possible signifier of a 1980s consumer culture obsessively tailored to young boys: Transformers, Ninja Turtles, Star Wars, Marvel Comics, Nintendo. Savage’s character functions as both the hypothetical consumer for the 1980s studio blockbuster, and the executive trying to second-guess its creative priorities: he repeatedly pre-empts and interrupts the plot to critique its ability to satisfy, demanding less “kissing scenes”, less talk, less girls, more machismo, more violence. He berates his old-country grandpa, with his repertoire of classic influences, for being strange and boring and out of touch with his generation. Yet Falk defiantly presses on, having total faith in the universality of good storytelling, and we see his efforts pay off as the once-bullheaded child gradually softens, opening his mind to new emotions and narrative experiences right before our eyes.

This, perhaps, is the film’s true staying power. Beyond the many layers of chuckling postmodern irony, it’s a fairytale outside a fairytale; only its magic is the transformative, communal power of storytelling itself. Little wonder that Goldman adored the work almost as much as his audience.

The Princess Bride is now available on The Criterion Collection.