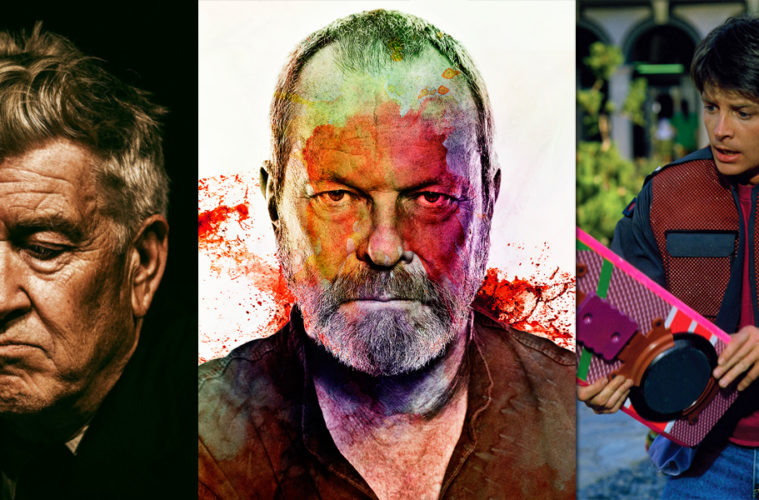 It’s holiday gift book time, and our list of must-reads includes weighty coffee table books on two iconic film franchises, some video store nostalgia, the mysteries of David Lynch, a bit of pre-Star Wars: The Force Awakens reading, and the brilliance of Terry Gilliam. Check out the recommendations below and see more here.

Back to the Future: The Ultimate Visual History by Michael Klastorin with Randal Atamaniuk (Harper Design)

Even as a fan of the Back to the Future trilogy, I was a bit taken aback by the hype surrounding October 21, 2015, a.k.a., the date Marty McFly and Doc Brown arrived in the Hill Valley of the future in Back to the Future II. It is only fitting, then, that part of the hype includes the wildly entertaining Back to the Future: The Ultimate Visual History. Featuring the participation of, well, everyone involved, from Michael J. Fox to Steven Spielberg, the book is 200 pages of visual highlights and backstories. It also features humorous pullout items, including the dust jacket from George McFly’s A Match Made in Space and, of course, that unforgettable photo of Marty and his disappearing brother and sister. I’m not sure a BTTF fan could ask for more.

At some point in the many years following Ghostbusters and Ghostbusters II, the characters and concept moved from well-known to downright beloved. With Paul Feig’s take soon to arrive, the time is right for the coffee table treatment. Ghostbusters: The Ultimate Visual History is a treasure trove of storyboard, production and casting details, behind-the-scenes photos, and “removable items,” including the actual preview card from the first screening of the 1984 original. The text is so complete, in fact, that nearly ten pages are devoted to the Real Ghostbusters animated series. Now that’s comprehensive.

The finest stocking stuffer of the bunch is surely Scott C.’s Great Showdowns: The Revenge. What is the book, exactly? It’s simple, really. Scott C. has created page after page of simple paintings, all portraying someone or something from cinema facing off in a showdown. So we have Bill Pullman and Robert Blake (with video camera) in Lost Highway, the Jamaican bobsled team and the finish line from Cool Runnings, and Robert Redford’s Roy Hobbs and the ballpark lights from The Natural. Part of the fun is simply paging through and trying to identify the imagery, since no names are included. Good luck, and enjoy.

“A few weeks after the first volume of Alternative Movie Posters was released, I had already hoped to release a sequel,” writes author Matthew Chojnacki in this second installment. That’s great news, since many of these posters—specifically, those created for The Godfather, Lolita, and Springbreakers—deserve to be considered as iconic in their imagery and style as the original pieces of art we know so well. And others here, including fine, funny approaches toThe World’s End and Her, are not just clever concepts, but thematically  perfect distillations of plot and emotion.

Press releases rarely capture the essence of a book, but there’s a line in the release for Terry Gilliam’s “pre-posthumous memoir” Gilliamesque that does the trick nicely: “This is the book that only Terry Gilliam could write.” Indeed, it is. Gilliamesque is a visual stunner, with archival photographs, oh-so-Gilliam sketches, unique marketing images, and more. What makes the book a must-own, however, is the author’s unmistakable voice. Whether pondering his role in the Monty Python troupe (“Some of the violence in my animations would come from my frustration at not being able to express myself as clearly as everyone else”), describing the tangled history of Brazil (“In this case, the releasing of the film became the story of the film”), or discussing the making of 12 Monkeys (“The first time I met Bruce Willis we talked about the scene in Die Hard where he was picking glass out of his feet”), Gilliam’s opinions and memories make Gilliamesque an extraordinary treat.

I Lost It at the Video Store: A Filmmakers’ Oral History of a Vanished Era by Tom Roston (The Critical Press)

Fittingly, Tom Roston’s I Lost It at the Video Store opens at Kim’s Video, that legendary East Village spot known for its collection of 50,000-plus films. The book sprang out of a New York Times article authored by Rolston when Kim’s closed for good, in August 2014, and like that memorable piece, Lost is a wondrous mixture of nostalgia (“These shelves felt limitless”), anecdotes, and sadness. The likes of Quentin Tarantino, Kevin Smith, and David O. Russell are interviewed, and while the author acknowledges the positives that have sprung from our streaming culture, the overall feel is somber. As Mr. Kim himself told Roston, “I am the loser.  Netflix is the winner.”

I know what you’re thinking as you read this list of new and recently released books on film: “Where’s the Star Wars?” Well, the majority of Force Awakens-related texts will not drop until next month. (See the novelization, “making of,” etc.) But the books falling under the Journey to the Force Awakens banner were released on “Force Friday” in September. One of the most interesting is Chuck Wendig’s Star Wars: Aftermath. An entertaining story of what happened directly after the Battle of Endor and the first of a trilogy, Wendig introduces a number of new characters, but also some old favorites. If you’ve been wondering what Wedge Antilles was up to after partying with the Ewoks, here’s your answer.

The consensus seems to be that The Peanuts Movie does an admirable job of bringing Charles Schulz’s characters to the big screen for a new generation perhaps unaware that, yes, people used to read comic strips in the newspaper.The Art and Making of The Peanuts Movie shows the level of care  and respect that went into the film, and also offers a brief but well-researched history of Charlie Brown and company. With lovely artwork throughout, this is a fine text to introduce young readers to just what’s involved in creating an animated film.

David Lynch: The Man from Another Place by David Lim (New Harvest)

I was skeptical about the market receiving another David Lynch book. What worthwhile words could be added to the pile (I don’t use that term endearingly) of all that’s been written and said over the decades? What compelled such a valuable critical voice to enter that territory? I second-guessed those feelings almost immediately after starting Dennis Lim’s David Lynch: The Man from Another Place, a work that, in combining thorough research with perceptive, even-handed critical analysis, can shine light on material without needing to declare itself a new paragon. (One can sample it here and here.) With crisp prose — one small example: I love how he describes Eraserhead as “an exemplar of ingenuity born of poverty” — and a consistent brevity (the 179-page text is not-inaccurately described in its press release as “meditation-length”), this is an obvious must-read for Lynch’s admirers. – Nick N.

Modern Horror: An A to Z of Horror Movie Reviews by Scott Weinberg (TheHorrorShow.TV)

Taking on the years between 2000 and 2015, Modern Horror: An A to Z of Horror Movie Reviews, a compendium of over 800 pieces by film critic Scott Weinberg, provides a comprehensive guide to 21st century horror thus far. Weinberg leaves no bloody stone unturned as he tackles big theatrical releases, SyFy channel cheapies, torture porn, arthouse indies (Berberian Sound Studio), horror-focused documentaries, and, weirdly enough, musicals (Joel Schumacher’s Phantom of the Opera) – in other words, if you’re looking for some perspective on, say, Bikini Bloodbath, it’s definitely in here. He sings the praises of widely acclaimed favorites such as The Babadook, Let the Right One In, Paranormal Activity, and many others, and gives credit to obscure gems otherwise lost to online steaming.

Not to be written off as some mindless fanboy, Weinberg – whose credits includes contributions to Nerdist, TwitchFilm, and Playboy – isn’t afraid to call out the genre’s all-too prevalent racist and misogynist tendencies (his intolerance for beloved rape-revenge thriller I Spit On Your Grave and its less memorable remake is refreshing), or take down a few directors (he calls Rob Zombie an “atrocious filmmaker,” and his disdain for/fascination with schlockmeister Uwe Boll leads to some amusing critiques). It’s also interesting to trace his evolution as a critic, as his writing has, over the past 15 years, gone from loosely structured, bloggy grousing to more polished, insightful work with a distinctly conversational voice. – Amanda W.

Independent Ed: Inside a Career of Big Dreams, Little Movies, and the Twelve Best Days of My Life by Ed Burns (Gotham)

Try reading Independent Ed without occasionally closing it to open up Final Draft to finish that one scene that’s been bugging you. That’s how inspiring actor-writer-director Edward Burns book is. “Independent Ed” is about more than the nuts and bolts of filmmaking and Burns’ career; it’s also about ambition, failure, success, and the people who standby your dream and vision. Independent Ed is as personal, modest, and unpretentious as Edward Burns’ finest work. This is must-read book for anyone interested in directing, writing, and the business of independent film. – Jack G.