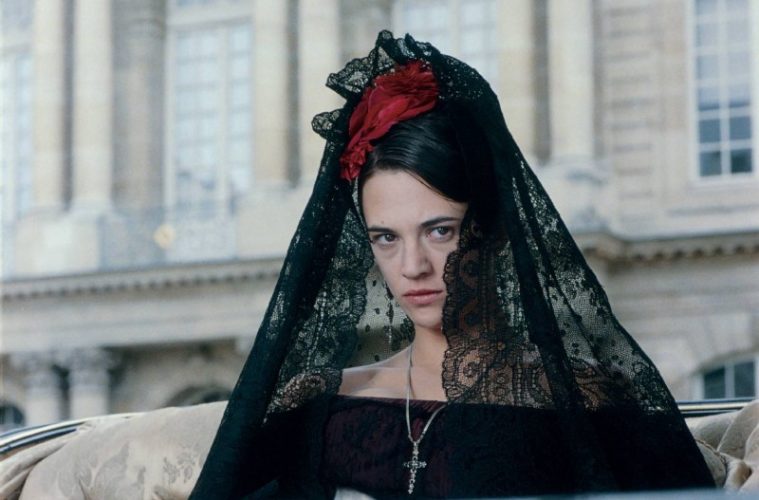 In the Bible, Paul the apostle wrote in the first letter to the church at Corinth these words: “Man did not come from Woman, but woman from man. Man was not created for woman, but woman for man,” which is repeated in the wedding ceremony between Ryno de Marigny (Fu’ad Aït Aattou) and Hermangarde (Roxanne Mesquida). These words cast a shadow — not only for Vellini (Asia Argento), the lover who has been cast aside, but for women everywhere in Christian nations. If one rebels, one fails god, but man can do as he pleases, for he is God. This breeds a generation of witches. If Man is God and Women refuses to acquiesce to Man then she is the Devil. Vellini, having been scorned by Marigny, becomes what is foreshadowed earlier by her crimson evening gowns, black veils, and propensity for blowing cigar smoke from her cherry lips. Vellini follows her heart and her carnal instincts to the seaside cliffs of Marigny’s elegant honeymoon where she finds a happily married man. Vellini is turned into a villain simply by the circumstances of her soul; and with Catherine Breillat‘s pointed lens on gendered conversation, she addresses the prickly differences between the perceptions of the sexual man and woman in 19th Century France.

Vellini’s narrative isn’t new or even unique. It is one for all time. She’s Hester Prynne, The Witches at Salem, and Courtney Love. She’s simply a woman and sometimes that’s enough. In contrast, Ryno is a man with an ill reputation. While it doesn’t sink his chances at marrying Hermangarde, the innocent girl he claims to have fallen for, it does call into question the differences between his reputation and the mistress he took years ago. Vellini is a figure who looms over their potential marriage, threatening to pull poor Harmangarde and Ryno into her poisonous fog. Even if she is merely a woman heartsick at the thought of losing who she loved.

Asia Argento, for her credit, plays this role with dominance and a hedonism that verges on the feral. The way she tilts her head or moves her wide shoulders to steer physical conversation through body language conveys power over the rather delicate performance of her lover and contemporary, Fu’ad Aït Aattou. With his elegant, puffy lips and fair, almost marble complexion, he appears softly feminine in the face of Argento’s more overpowering womanhood. It wouldn’t be strange to mistake Argento for a much older woman and Attou for a mere boy, but they only share a five-year age difference. Argento gives one of the great performances of the last ten years in the hands of Breillat’s intelligent script and direction, which sees a blatant power game of sex and fury unfold for all its misery and ecstasy.

The film is structured around a framing device where Ryno has to prove he would not go back to Vellini in the eyes of Harmangarde’s grandmother, La comtesse d’Artelles (Yolande Moreau), on the eve of her granddaughter’s wedding. He tells her the story of his taboo relationship in a series of flashback sequences. By choosing to replay the events through his perspective, the movie is able to pinpoint the societal expectations of women via the subtle ways in which Ryno demonizes the one he once loved. He speaks with soft admiration about the first time when they met at a gathering at the conclusion of an opera where salacious pictures were passed around as suppertime entertainment. The pornographic is merely an extension of Breillat’s reality. Sex is not locked away in layers of tights and pantaloons, but only a moment away from overcoming the movie like the red tide in the elevator from The Shining. When Ryno meets Vellini for the first time she expresses disdain for the man and even goes as far as to break a glass within her hands to move away from him at the dinner table, but in his own words he wins her over later that night after some routine gambling. Vellini does not have the agency of her own story in his recollected flashbacks, but Argento plays the role as if she does. She sees Ryno as less of a love interest and more as a plaything she could have if she wanted. It’s a power fantasy, and within her smouldering eyes she ensnares Ryno simply because she can.

Ryno’s honesty about his own carnal desires in the face of his soon-to-be-wife’s grandmother is endearing to the older women, and — in a meta-commentary on our own voyeurism towards acts of sexuality, gossip, and relationships — she functions as an audience fulcrum. Sitting there, she is adorned in the finest clothing money can buy, but beneath the veneer she loves a good soap, and so do we. What was initially a cat-and-mouse game between Ryno and Vellini turns into exasperation and desperate longing for one another when the flashbacks resume. Breillat seems to graduate from the Oshima school of thought present in his masterpiece In the Realm of the Senses, that these two characters cannot exist without being beside one another in bed. They take to the countryside and the desert and flee into themselves, making the world small. But within their growing carnal affectations toward one another, a child is born and, with it, breeds tragedy that dissolved the relationship. When Ryno finishes the story, The Countess seems satisfied and the marriage follows, but Vellini does not lie down, even within her damaged heart. If she is a martyr, she is only one for herself and for the love that slipped away.

When Ryno and Harmangarde settle beside the sea for their honeymoon Vellini’s presence seems to come with the dark clouds lingering over the horizon. For as much as Ryno and Harmangarde seem to love each other, Vellini’s persistent admiration for the young man lingers and Harmangarde worries. Vellini is like a ghost who haunts their relationship, and when an apparition of this same woman appears on the island dressed in near drag, it spells doom for the couple. She is a dragqueen siren. Ryno cannot let go of her voice and he capsizes within the familiar waters of his former love. Like a sickness, they are addicted to one another and letting go is not merely possible. Breillat’s camera lingers on their naked bodies cascading in the bedroom as they consider what is next, but the final chapter is the image of their nudity. Vellini is the harpy. Harmangarde carries a widow’s pain. Ryno is merely a boy. Ultimately, though, Vellini is the one who is blamed. The vixen, the harlot, the Woman who is only guilty of accidentally falling in love.