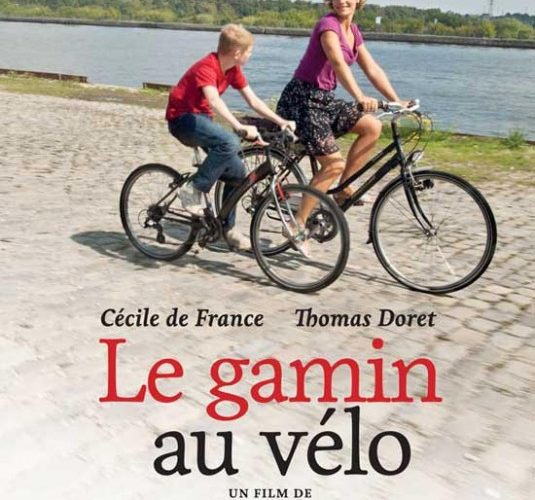 [NYFF Review] The Kid With a Bike

The Dardenne brothers (Jean-Pierre and Luc) are known for a very particular brand of cinema. After a collaborating on a number of documentaries, the Dardennes switched to narrative film, bringing their naturalistic aesthetic with them. And whatever the story, the brothers lovingly return to their muse, the very region were they themselves grew up. Their characters are frequently people on the fringe of society, whose voices are silenced by their lack of status. In the case of their latest Cannes-adored drama The Kid with a Bike, that character is a tenacious and wary young boy named Cyril.

The film opens on a small towheaded boy, gripping a telephone like a lifeline, staring toward the camera with a terrifying determination. This is Cyril (Thomas Doret), whose father has left him at an orphanage with the promise of a speedy return. But as the call fails to connect, a caretaker insists his father has skipped town…with no forwarding address. So doggedly devoted to his deadbeat dad that he refuses to believe anything so negative about him, Cyril insists his father would never leave without bringing Cyril his prized bike. It’s this absolute faith in his dad that drives him to run off to his old apartment building, where he finds no trace of his father, but does meet a kind-hearted hairdresser (Cécile De France) with whom he soon builds a tenuous bond. She begins taking him in on weekends as a foster parent, and together they seek out Cyril’s dad. While this premise may seem ripe for melodrama and precious moments, the Dardennes reject such schmaltz in favor of a more visceral tale. It’s worth noting, the brothers had originally named the film Pit bull, after the nickname a sketchy father-figure gives their scrappy hero. (They noted in a jovial Q&A that distributors feared that title would scare off female filmgoers, and so was changed to the more art house friendly The Kid with a Bike.) The pit bull moniker well suits Cyril, for while he is capable of love, he has a rough exterior and a frighteningly easy ability for violence. His need for his father burns so hot within him that it makes him volatile and unpredictable, and first-time actor Thomas Doret embodies this with his gritted, guarded countenance and lightning fast limbs, always ready to defend what little he has. It’s an unsentimental journey that is engaging but sometimes frustratingly vague.

While it makes sense thematically that the audience learns little of Cyril’s background, him being as guarded and emotionally distant as he is, it is stultifying that so little dimension is given to the film’s other characters. Little is given in the way of background to any of the characters, leaving the audience to fill in the gaps. And while this device can work beautifully in film, allowing each viewer to create a cinema experience unique to themselves, the Dardennes refusal to paint more three-dimensional characters in this instance detracted the drama’s impact. As Cyril continued to reject his would-be mother figure, I found myself wondering why this random woman would put up with such behavior from a boy she barely knows? Why would she take him in? He is not easily lovable or sweet and comes with a hefty amount of baggage. At the post-screening press conference, another critic asked the Dardennes the very same question, and they explained quite readily that they feel Cécile De France herself is filled with such warmth and light that her very screen presence serves as sufficient motivation. While De France is an unquestionably compelling onscreen presence, it was frustrating that such a key figure in the narrative is treated with such neglect. Hers is not the only character who feels undercooked, just the most notable. Regrettably, this lack of character development does slightly deaden the drama, detracting from the boons of the naturalistic style.

Still, The Kid with a Bike is undeniably intriguing as a portrait of childhood fury, never romanticizing or excusing Cyril’s rage and outbursts. Aside from the use of cell phones, the tale feels timeless with its dark dangers and kind strangers that’s only indulgence is the occasional score that lilts like a lullaby to soothe its savage but hurting pit bull.

The Kid With a Bike is screening now as part of NYFF. A limited release will follow in March of 2012.