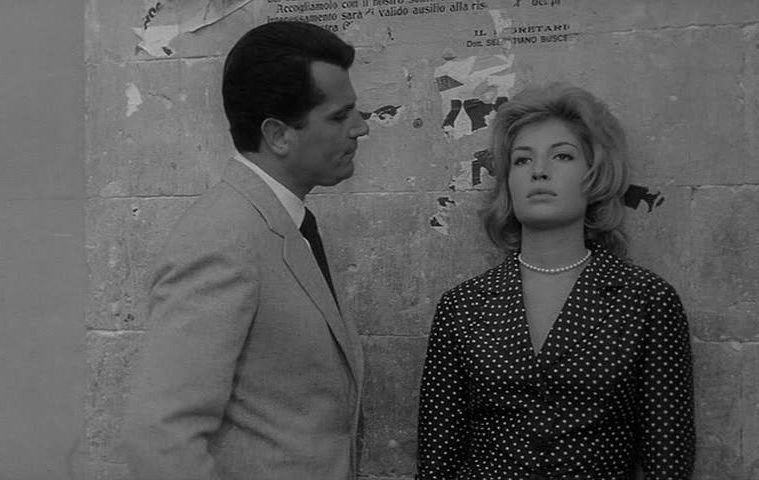 The Influence of ‘L’Avventura’ on ‘Spring Breakers,’ ‘The Bling Ring,’ ‘To the Wonder,’ & ‘Upstream Color’ Any narrative of film history is, inevitably, peppered with simplifications — a through line designed to connect the canonical works while ignoring complicated industry, economic, and social forces which have shaped the medium — but one simply cannot deny the power that L’Avventura exerted upon its premiere at the 1960 Cannes Film Festival. Though greeted to cheers and boos at the time, Michelangelo Antonioni’s epochal epic has been continually cited as a primary influence by major filmmakers of the second half of the 20th century.

It’s a work that remains challenging for many viewers, but the impact remains palpable: seemingly every “New Wave” across the planet would borrow elements until these unique gestures were forever ingrained in film language. Even this year — right as it’s being toured by Janus Films in a stunning new 35mm print — one can see the film’s visual, textual, and cultural ideas percolating through works in the United States. Although I’d be hard-pressed to declare these “direct citations,” it is hard not to detect a subconscious undertaking of Antonioni’s work in these films, titles that could, themselves, be considered a refraction.

Harmony Korine’s neon-fueled gaze into the teenage wasteland of America could easily seem like the opposite of Antonioni’s reflective, disinterested vision, but Spring Breakers takes one key element from L’Avventura: abandoning the apparent protagonist halfway through. The narrative’s individual use of this element is quite stark, however, in both methods and merit. Breakers’s Faith (Selena Gomez) forms the moral center of the film — a naïve girl who acts as something of an outsider to the group, reflecting a surrogate audience member by keeping us in check with reality. Korine makes an ambitious gambit by throwing her out of the narrative and forcing his audience down a stranger rabbit hole, but it’s also where the film loses its power: there is no longer a place of tension, nor a chance that the film can return to the status quo. It becomes about the journey downward — the pushing of boundaries — more than anything else.

Compare that to Antonioni’s structure, in which the disappearance of Anna (Lea Massari) — handled via the pure means of cinema: she fades out by dissolve — always haunts the romance of Claudia (Monica Vitti) and Sandro (Gabriele Ferzetti), marking a past mistake neither can forget. While the narrative advances via their “search for Anna,” its end point seems arbitrary; do they really believe that, somehow, she’s magically waiting for them at the end of so many scattered rumors? Most likely not. Yet the fear of what actually happened to Anna always breeds tension as Claudia falls for Sandro — she might be missing from the narrative, but she’s always there. Where it ends, then, is tragedy: as Claudia’s hand reaches out — even though she knows all of what Sandro represents — one cannot help but think that Anna’s story is likely to repeat itself.

Sofia Coppola has cited Antonioni as a major influence on many of her works, and one could easily imagine the angry discussions of “privilege” which have dogged her works being applied to the class depiction in L’Avventura. In both cases, they often come without qualification and are unjustified. What both filmmakers do share, however, is a touch for class psychology. Kent Jones writes about the specificity of The Bling Ring, which he argues is about confronting the viewer  “with the raw facts of this kind of absurdity and this kind of sadness under these particular circumstance.” The class depictions in L’Avventura are right up that same alley, and more than anything else, are the unspoken element of the film that circulates through every decision made therein. Part of what works so neatly is how Antonioni suggests Claudia’s working-class background and, thus, her outsider status — that wig she tries to fit in suggests how distanced she is from the others.

One sequence sees her left alone at the family estate, mirroring her observance of passing cars with a maid above and perpetually an ancillary figure in this social class. Antonioni reveals the possessive and unsettling elements of this psychology in subtle ways — the manner in which Anna’s father (first framed behind a cathedral) stares at Claudia once he realizes she is wearing one of her daughter’s shirts; the suspected and racist treatment of the Sicilians; or Sandro’s jealous provocation of spilling the ink of the artist outside the cathedral, just because he can. Much like the young protagonists of The Bling Ring, Antonioni’s characters posses both objects and each other in an almost ingrained sense of “typical” behavior; the one break, thanks to Claudia’s presence, is the oft-forgotten (but very funny) interlude with Giulia’s seduction of the painter. Whether Coppola is successful through her nods to Antonioni depends on one’s willingness to go along with her narratives. Coppola’s material is harder to see without the distance 53 years may grant us. Gucci, iPhones, Facebook profiles fill up these lives, but there are questions about what Coppola’s class critique amounts to that doesn’t feel apparent from the opening moment; In L’Avventura, the extent of Sandro’s possessiveness isn’t truly confirmed until Claudia discovers him near the end of the film. At this moment, his ability to take whatever he desires reaches its most brutal conclusion.

To the Wonder (Terrence Malick)

On its surface, Malick’s “transcendental” romance amongst the modern-day plains of Oklahoma seems like a more lucid continuation of the style honed in past works — but it’s the Antonioni-esque functioning which separates To the Wonder, shaping it into more of a psychological horror film than spiritual romance. (Special credit to Brown lecturer Michael Loren Siegel, who first pointed me to the connection.) At the center of both L’Avventura and To the Wonder are people who cannot articulate why they are drawn to each other, their environments speaking for the emotions as they wander — and, yes, sometimes twirl — through them. In both, the woman rejects societal lands for something more elemental and natural — only does Claudia fall for Sandro when they are alone in the ghost town, a societal escape that’s only interrupted by a train. Her interactions with those outside Sandro have a paranoid quality to them, none more astonishing than the dozens of lower class Italian men staring at her — a scene that plays to comic absurdity but has the menace of a Hitchcock moment.

To the Wonder might start as an eternal romance in a French cathedral, but the urbanization and suburban houses trap Olga Kurylenko’s Marina, creating an anxious and noxious environment. The beauty of nature is slowly replaced by fences, construction sites, and the anonymous, cold hotel that leads to the romantic downfall. To the Wonder’s ending suggests both tragedy and hope as the couple split apart, their ideas of what could have been sprinkled through the final goodbyes. Antonioni, however, plays to a more cynical brand of interaction: his couple is doomed to remain together. Of the films discussed here, To the Wonder is the only which may improves when seen in the context of Antonioni, as it opens a dialogue about Malick’s radical break from previous work.

There’s been the avoidance of a certain “A” word often related to Antonioni, in part because I think it’s overused and, furthermore, doesn’t speak to what’s actually happening in his work; I’ve always been partial to this piece, by Glenn Kenny, that proposes “disengagement” instead. One, still, can’t escape that fact that much of L’Avventura’s power comes from how separate its characters feel from each other, even when they’re trying to display their love. (While Fellini gets the credit for making whimsical flights of fancy, there are few things sexier than Monica Vitti singing along to the radio in a bathrobe.) In many ways, Upstream Color plays as the antithesis of Antonioni — despite their differences, Shane Carruth‘s characters are forced together through means beyond their control. It’s a more hopeful vision of the world, and the film’s elliptical editing — along with the use of nature — sometimes recalls the abstractness of Antonioni’s frames, where environment speaks more than dialogue.

But there’s a major difference that separates Carruth’s vision from Antonioni’s portrayal — while the American works in metaphors, the Italian operates in specifics. Once you parse the “plot” of Upstream Color, it becomes quite obvious how Kris and Jeff end up together, but the various elements (pigs, flowers, Thoreau) remain metaphors which never create a materiality. It feels like Carruth picked symbols out of a hat and made connections “cinematically,” but all in rather unspecific, hollow ways. By the end, one might be happy that Kris and Jeff can form something authentic, but it feels rather tedious, even pointless. L’Avventura, on the other hand, has a much stranger romance at its center, brought by a man who starts passing at Claudia while they’re still on the island searching for Anna. Various things pull this couple apart, yet they feel cosmically linked to one another by forces that are perhaps even more unexplained than the mystery in Upstream Color. Yet it’s so palatable in every scene: the various locations (Antonioni’s only film to include a major section set in the poorer Southern Italy) are filled with the works of the past — old paintings, older buildings, and even the faces of caretakers — that feel of a time gone by. Sandro remarks, “All this was built to last centuries. Today — ten, twenty years at the most.” Through this, the material explains the tragedy at hand in their romance: as the two stare out into an unknown future, the wall in front of them appears on the verge of collapse. Have you seen the restored print? Do you see the connections made above?