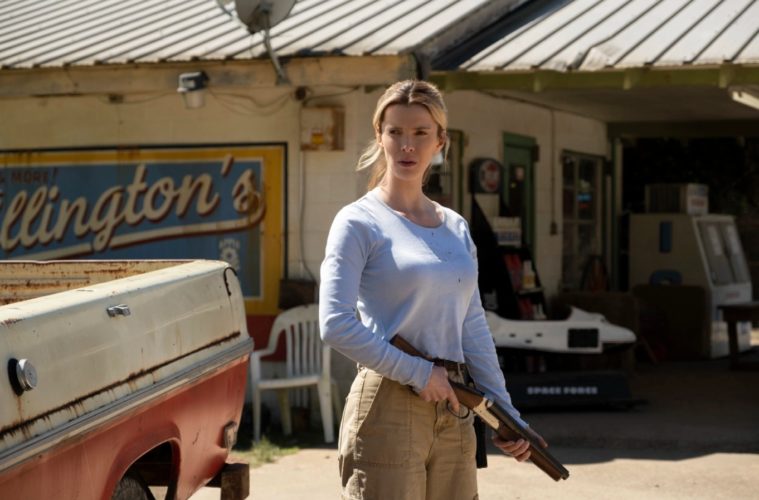 America’s sharp political divide is an oft-explored topic in cinema, and a tale as old as time across any medium. However, with our country’s unceasing mass shooting epidemic fanning the flames of political outrage, The Hunt found itself in a predicament last fall. Based on marketing footage alone, Craig Zobel’s satirical thriller was the target of right-wing media, including Twitter’s most gratuitously active account, and was indefinitely delayed by Universal mere weeks before its September release. The “controversial” thriller has now re-emerged and, surprisingly, it’s easy to imagine both sides of the increasingly divided political spectrum will finally come together in a rare moment of unity, concurring just how lazily written, shoddily constructed, and downright pointless the film is.

Loosely based on Richard Connell’s 1924 short story “The Most Dangerous Game”–itself the foundation for numerous other films, books, television episodes, videogames, radio plays, etc.- Zobel and co-writers Nick Cuse and Damon Lindelof have taken the basic idea of the hunters becoming the hunted and transposed it to the arrogant liberal elite taking down the “fake news”-reading conservatives. With Cuse and Lindelof coming off of the nuanced, impressively mounted Watchmen and Zobel having the skillset to unnerve audiences with his sharp, unsettling drama Compliance, one might expect a blistering exploration into the psychology of what makes humanity so divided while simultaneously offering thrilling action setpieces amidst the political turmoil. Unfortunately, from its very first moments, The Hunt opts for a more reductive viewpoint in its satirically blunt characterizations, execrable script, and a directorial aesthetic that can best be described as utterly anonymous.

There’s no time wasted jumping into the action as we find ourselves on a plane headed to an unknown location. Introduced to a group of asshole liberal elites–characters defined solely by their sense of moral superiority on hot-button issues as they bandy about NPR-approved jargon–it quickly becomes clear they’ve captured and drugged outspoken conservatives from areas across the country, including Staten Island, Wyoming, Orlando, and Mississippi. A gratuitously gruesome encounter sets the stage for the genre approach taken here, as people get picked off for no more than mere shock value. With no explanation, these hunted wake up gagged in the middle of nowhere near an open field containing only a mystery box (Lindelolf is clearly taking another one of J.J. Abrams’ storytelling tricks quite literally). The “game” soon begins and one of the story’s only virtues is seeing how the smartest of the bunch, Crystal (Betty Gilpin), navigates through the minefield of stupidity and, well, actual mines, amongst other treacherous traps.

Before we get to Crystal’s perspective, Zobel juggles a number of different viewpoints to continually pull the rug out from under his audience as the no-holds-barred nature of the killing field becomes quickly apparent. But what begins as a fun gag to throw us off balance, becomes mean-spirited in an instant. Do we really need to see someone that’s impaled and about to die get blown up by a grenade and stay alive to only realize the bottom half of their body has been detached–all while they are discussing what they had planned for their imminent birthday? One may argue the entire proceedings are layered with a gleefully comedic underpinning to poke fun at everyone, but the humor simply doesn’t land.

Zobel and his team trip over themselves to not take sides on the political side, serving up banal dialogue that is so pointedly attempting to speak to the recent years of endless online rhetoric, it becomes like white noise. Liberals text about the “rat-fucker-in-chief” and “deplorables,” then argue whether or not it’s okay to refer to African-American people as black, as well as expound on the reality of climate change. Conservatives spout about crisis actors, snowflakes, and the right to bear arms. It’s all so generalized and obvious that the sole chuckle is derived from the only ultra-specific joke, in which a liberal deludes himself into thinking he’s friends with an established director and Film Twitter celebrity because she liked one of his tweets. The rest comes across as tasteless and void of any real bite or insight, no matter where your political affiliation lies. It’s no surprise, then, that the only person who feels like a real character is the one most defined by their silence: Crystal, who is kidnapped from her home state of Mississippi. Taking on the final girl trope with aplomb, Gilpin brings a physicality and semblance of soul to a film otherwise absent of such qualities. As the story eventually narrows its scattered vision to her fight for survival, she carries a sense of mystery and a volatile, take-no-prisoners attitude that emerges as the only memorable aspect of the experience.

The Hunt has now received two major moments in the marketing spotlight–one for its initial controversy and another for its re-emergence into the marketplace–but we can’t imagine it being the center of many more headlines after audiences actually see the film. By going for the lowest common denominator of sarcasm and straining to appeal to everyone, it’s the cinematic equivalent of Trump’s now-infamous “very fine people on both sides” remark. As Craig Zobel’s instantly forgettable feature receives a wide release, there’s another film out there one is better served to shift their attention towards. Kleber Mendonça Filho and Juliano Dornelles’s rollicking, unclassifiable genre mash-up Bacurau explores strikingly similar themes of a lower class taking revenge on elites hunting them for sport. Yet it does so with an underlying consciousness of social and political history, as well as being simply an expertly-directed, ridiculously fun time. It’s the kind of escapist action film and politically-tinged revenge tale that could actually spark a discussion rather than the reaction one has after walking out of The Hunt: stunned silence at how filmmakers could so severely botch a satire in a moment when there is plenty of material to mine from. If nothing else, at least it is mercifully short.

The Hunt opens on Friday, March 13.