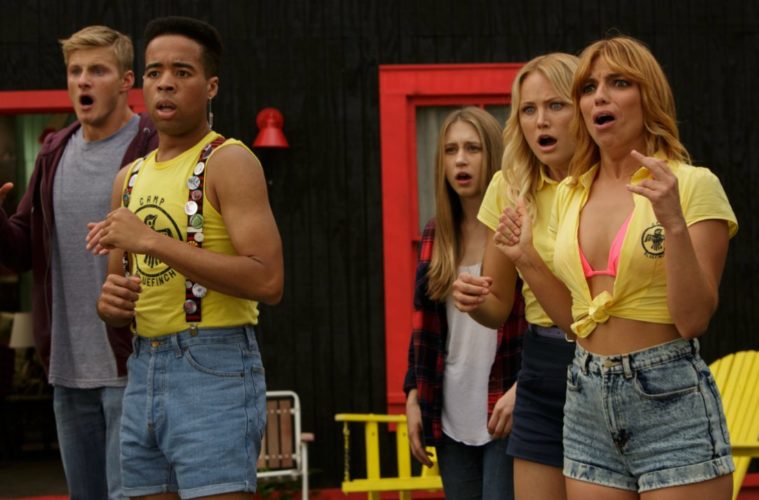 Out now in limited release and available on VOD, the horror comedy The Final Girls brings quite a comedic punch. When I talked with the team behind the film at SXSW you could see just how much they used their natural comedic timing for laughs. The film follows Max (Taissa Farmiga) who, along with a group of friends, get transported into the reality of an 80s horror slasher her recently deceased mother starred in. Together they must band together and figure out how to survive the murderous Billy who haunts the campgrounds.

For director Todd Strauss-Schulson, it’s a film that manages to be highly entertaining without overstaying its welcome too much. There is also a fun balance of zany effects that work well with some that are a bit more regrettable. In my SXSW review I mentioned, “For The Final Girls, a high-concept meta riff on the slasher horror films of the 80’s, it mostly makes an intelligent use of a cast that is peppered with familiar faces, all who are driven to actually make this tone work.”

During this interview I talked with director Strauss-Schulson, Thomas Middleditch (Duncan), Tory N. Thompson (Blake), Adam DeVine (Kurt), and Alexander Ludwig (Chris) and I got them to open up about the fun they had with the wardrobe, the magic of an opening shot, and some of the more vivid effects used in the film. Check it out below.

The Film Stage: One thing that is fun about this movie is that the clothes are obviously very retro. So there’s some room to play. I loved your button collection, Tory [N. Thompson]. And for you, Adam [DeVine], I’m sure you got to choose your underwear.

Todd Strauss-Schulson: No, man. I chose that. That was straight up Marty McFly Calvin Kleins. Light lavender.

But besides Todd choosing some underwear, you had some choices, right?

Thomas Middleditch: I know I did. The shirt that Duncan, myself, is wearing, yeah. It’s from a fictional previous horror movie that he loved. He’s the kind of guy that would wear a Friday the 13th shirt but we can’t get the license for it so I have an artist friend that came up with a fake previous film called…

Middleditch: Yeah, Murder Alley. It’s about a guy about to bowl with a head as the image. If you can believe it! [Laughs]

Strauss-Schulson: Yeah, we helped on that. We pitched a bunch of terrible 80s horror film titles and his friend designed it.

Tory N. Thompson: I played one of the camp counselors and most of us wore the uniforms. But the accessories, those were amazing. We had a great costume department.

Strauss-Schulson: I was very adamant about that crystal earring.

Thompson: That was the one thing I could not say no to.

I love it because every time his character appears in the film I see it dangle and reflecting light.

Thompson: Yeah, I think all the accessories in the movie are fantastic. But what you didn’t see much, which I loved, were the shoes and specifically mine. 80s high tops? Oh yeah.

Adam DeVine: I’m… just so proud of my balls.

DeVine: So every time I was trying on pants I was just trying to show them off.

Middleditch: All the growth went to the nutters.

Middleditch: There’s a finite amount of mass so you have to sacrifice one aspect for the other. So, big balls…

Before we go too far down this rabbit hole, I did want to talk a bit about the stylized feel of the film. A few key moments. First, when we first enter the camp, there are a few scenes with flowers and the whole setting has this hyperreal look. Like the saturation was turned way up. Everything is super vivid. What was the idea behind that and how did you pull it off? Did you shoot it in camera or have to do that afterwards?

Strauss-Schulson: That’s a good question. As we were writing it there was this question and I think a lot of people would assume what it would look like on the camp grounds. I assumed a lot of people thought of these washed-out 80s horror films. That probably would have been more authentic but I feel like you don’t want to live in that world for 80 minutes. So the idea was to push into that magical Wizard of Oz feel of stepping into another world, a dream world, where everything is so beautiful. It looks like a legend. There’s pollen everywhere. And we didn’t shoot on sets. We shot on real camps with real forests. We were trying to make it look like a set. Very lit and very dressed. A lot of it was curated by us. The flowers and the greens were brought in. So in color we jacked it all up. The first act of the film, we try to do that Wizard of Oz thing again. It’s more sepia and golden, with some desaturation. So when you get into the camp it breaks your eyes. It’s like Speed Racer with the color. So yeah, that was conscious.

Middleditch: That scene when Malin [Akerman] and Taissa [Farmiga] are having a heart-to-heart with all the pollen floating?

Middleditch: I’m wheezing just looking at it. Getting all stuffed up. [Feigns nasally voice] “Oh my god, I forgot my Claritin!”

There seems to constantly be a group dynamic here and you have to interact with them. It seems like that would heighten things a bit. What was that like wrangling all these people on set to act and stay on point? And for you guys on set, I’m sure you want to make sure you are on target because you don’t want to mess it up with everyone watching.

Middleditch: I don’t know. I’m not afraid of messing it up. Sometimes… I yell “Cut!”

Strauss-Schulson: I don’t know. It wasn’t that hard to keep them on point so much as the main challenge was we just didn’t have a lot of time to do it. I had a very ambitious set of goals every day in terms of how much to shoot and what we were shooting. How complicated some of the camera stuff was. We just didn’t have any time so there was a huge rush. There was a lot of pressure every day. When you have a scene with nine people talking that’s just a lot of heavy lifting. So that was the challenge but these guys were on point, hilarious, and there was room for improvising. What was interesting was that everyone is around the same age and a lot of them knew each other from other projects. So we all got along really well. It was like a summer camp, literally. If ever it was hard it was because we would show up on set and we’d be giggling. It was a bummer because you’d have to be the guy stopping the party.

One of my favorite scenes that is super brief and small is in the first act when you are watching cars pass in an intersection and it’s a fixed shot.

But once Malin [Akerman] and Taissa’s car comes in frame from the bottom suddenly the camera keeps them right in the middle of the frame at their speed. How in the world did you pull that off? Was it just digital?

Strauss-Schulson: That was an old idea. I wanted to put that in my first film and I was talked out of it and I resented the people that did that to me. So that went right at the beginning of this movie. I like the idea of looking at a freeway with many, many cars passing by and locking onto one as if there are a ton of stories in the world but you’re going to tell this one. The way we did it was pretty tough. We called it the Grand Theft Auto shot. It’s a real car and it’s a real plate. We shot a camera going down an empty street. We shot a car going down an empty street. We shot a plate of it static. The sky is all fake. Then we merged them all together with visual effects. It took a while to get it right.

Strauss-Schulson: It tries to set the tone early that this film is going to be a bit stylish. Expressive film making.

The Final Girls is now in limited release and available on VOD.